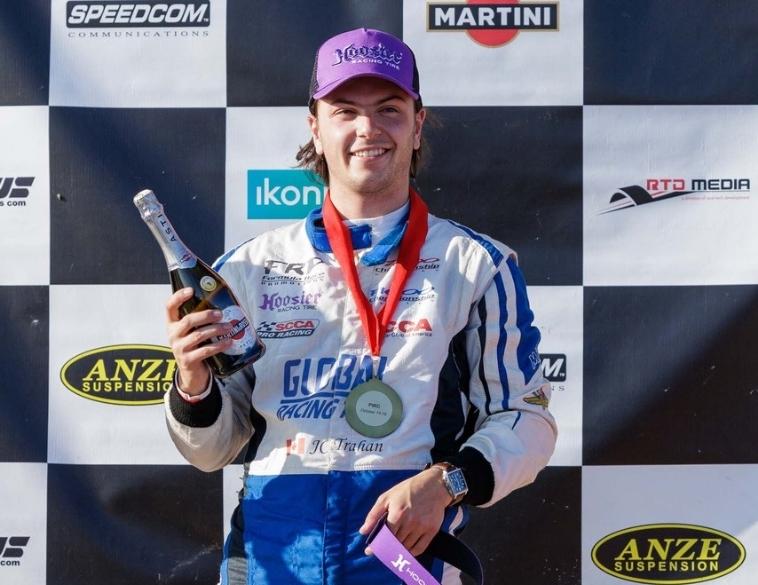 Winner of the last two races of the season presented last weekend at the Pittsburgh International Complex in Pennsylvania, Jean-Christophe Trahan put his hand on the title at the end of an exceptional season that saw him win no less than seven times in twelve races.

The F2000 series drivers were back in action last weekend for the final double bill of the year, which would decide the title between Trahan and American Austin Hill. The fact that he was back on the Pittsburgh track, where he drove last July, was an advantage for Jean-Christophe: “It’s the only track where two F2000 events are held in the same season. The confidence on the track came very quickly, it helped me a lot to be able to work on the settings from the start without having to learn a new track”.

The weekend of races can be described as perfect or almost perfect for the Quebec driver, who achieved the two pole positions and signed the two victories. “In qualifying, I could have done more laps but I was saving my tires, knowing that the series rules require the race to be run on the same set of tires. But that didn’t stop me from taking two pole positions, each time more than half a second ahead of my closest rival, which was really promising for the races,” said Trahan.

Jean-Christophe is the second Quebec driver in the history of the series to achieve this feat, after Rémy Audette 11 years ago. “When I started talking to the Global Racing Team in the spring, I didn’t have much of a budget and I didn’t even think I would race the whole season. I missed the first event and only signed up for three races. Just 6 months later, I am the winner of 7 races and I am the 2022 champion. It’s a dream, it’s exceptional” said Trahan.

Jean-Christophe Trahan was able to win this title thanks to the help of partners: “Gestion Lux Automotives, MF Racing, OMP, Contour Détour, Imprimerie Les 4 Points, Blud Lubricants who supported the team throughout the season… and of course my parents who always supported me and all the generous donors of my GoFundMe!” He adds, “This title is very satisfying because it was acquired in a series I was discovering, on circuits and with a team I was discovering. I also remember winning in Barber as one of my best memories, because I didn’t qualify well and still won in my debut there.

Focus on the future

The new American F2000 champion would now like to be able to compete in the “Chris Griffith Test” which brings together USF2000 and Indy Pro 2000 series teams to evaluate the performance of drivers they are considering for the next season. These tests will take place in two weeks at the prestigious Indianapolis Motor Speedway.

Beyond that, the Ste-Thérèse driver hopes to raise enough money to continue to move up in the motorsports hierarchy in 2023. “The single-seater series leading to IndyCar requires astronomical budgets. Of course I still believe in it, but I also leave the door open to different series, where the budgets are reasonable. I want to win and offer positive visibility to my partners. I have wishes but I also want to seize the best opportunities depending on the available funding” concludes Jean-Christophe Trahan.