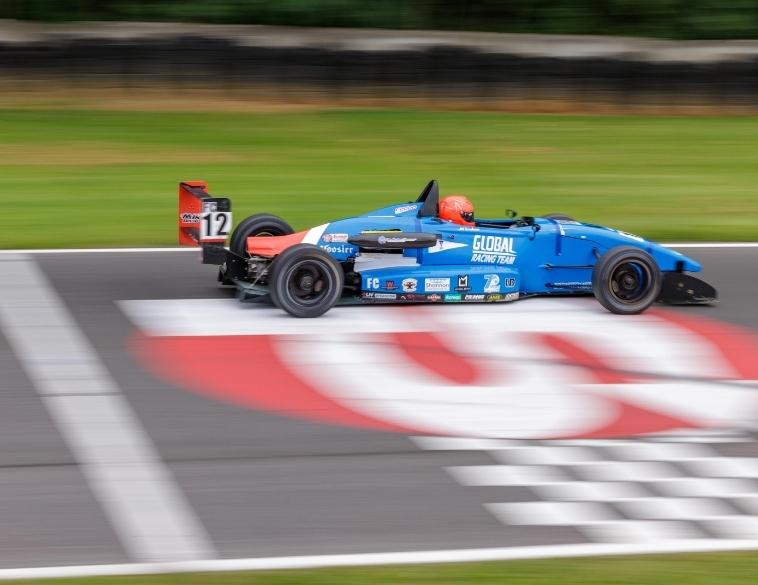 Two races were scheduled and Trahan finished second each time, keeping him in first place in the drivers’ championship.

As always this season while a rookie on the show, Trahan had to learn a new route upon arriving at West Virginia. However, he was able to discover the Summit Point circuit virtually: “Thanks to the sessions carried out on the simulator, my adaptation was short. I was quickly at ease on this magnificent natural road circuit” he confides.

Winner of five of the first eight races this season in the series, Jean-Christophe Trahan saw his hopes of another success collapse in the second free practice session, when the anti-roll bar of his car broke on track. “These are things that happen. The main concern is that the team didn’t have any spare parts, so the mechanics had to re-weld the bar before almost every qualifying session and race because it would break again after one or two laps. In the end, I spent most of my weekend with a car affected by this problem” explains Trahan.

The Ste-Thérèse driver had to use the curbs/rumble strip as little as possible in the turns, as they automatically caused the anti-roll bar to break again. “When you are fighting for victory and you know that you won’t be able to use the width of the track as much as your opponents, it complicates things but there was no point in complaining. I had to score as many points as possible to keep the lead in the championship”, said Trahan.

The Global Racing Team driver finished second in both qualifying and both races, behind Tim Minor. “Tim was racing on his home track and I think that without my mechanical problems, we could have put on a good show fighting together, but he was really too far ahead. The fact that I was able to qualify within half a second of him in the second session, with my car damaged, is a great result under the circumstances” explains Trahan.

In both races, J-C Trahan had to deal with degraded tires in the last laps. He still crossed the finish line several seconds ahead of the third place finisher. “With the broken anti-roll bar, the handling was terrible, I had a lot of understeer and the tires were very worn. I want to win because every time I start a race I have that goal in mind, but you also have to be able to secure the points and that’s what I did at Summit Point,” said the driver of the #12 Van Diemen single-seater in MF Racing and Bud Lubricants colors.

Jean-Christophe Trahan is now 25 points ahead of Austin Hill in the championship standings heading into the final two races of the season at the Pittsburgh International Race Complex in Pennsylvania on October 15 and 16. For the first and last time this year, Trahan will not have to learn the layout as this is the second event at this location this season for the American F2000 competitors. “It’s an advantage, that’s for sure, especially since during my first visit there, I achieved the track record for a Formula 2000” explains the man who also won the second race of the weekend.

“I have a small cushion of advance in the championship, I have to be very careful but the most beautiful way to get the title of champion 2022 would be to do it with new victories. If the car is reliable, and I have confidence in the team to put the Summit Point problems aside, I’m sure we’ll get there” concludes J-C Trahan.