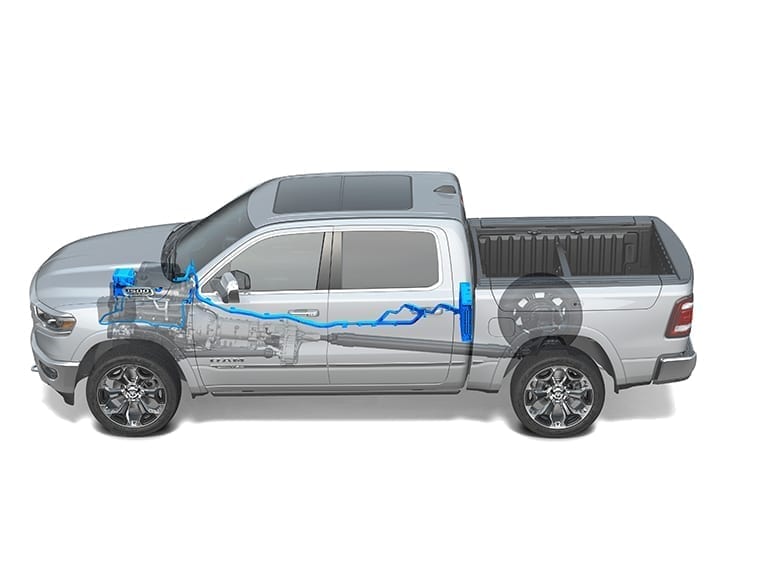 For some automakers, such as Fiat Chrysler Automobiles (FCA) one strategy was adopting a mild-hybrid system that supplements the internal combustion engine powertrain to boost fuel economy, especially during urban driving.

Introduced as an option on the 2018 Jeep Wrangler with the 2.0-litre four-cylinder engine and the 2019 RAM 1500 pickup equipped with 3.6-litre Pentastar V6 or 5.7-litre HEMI V8, the eTorque provides a number of advantages over a conventional Wrangler or RAM when it comes to efficiency.

Yet, considering the popularity of both the Wrangler and RAM in North America, it’s also important for automotive service technicians to understand how the system works and the specific service procedures needed to maintain maximum operating performance since in the years ahead, a lot of these vehicles will be entering aftermarket service bays in both Canada and the U.S.

To help, the National Institute of Automotive Service Excellence (commonly known as ASE) hosted a free webinar on June 5.

Cecil Williams, Area Technical Training Manager for FCA provided an overview of the eTorque system as well as some specific service procedures that need to be performed to ensure optimal operation.

The eTorque Mild Hybrid System, sometimes referred to as a belt generator, works by shutting off the engine when the vehicle is coasting or comes to a stop and restarting once the driver releases the brake pedal.

Under coasting, the system provides regenerative braking to charge the battery system.

The eTorque setup doesn’t use a conventional 12-volt alternator, instead charging is delivered via a 48-volt motor/generator to 12-volt DC converter, since the charging system relies on a 48-volt battery to store the energy for the motor/generator that powers the engine stop/start function of the eTorque system.

Meanwhile, the vehicle’s accessories such as HVAC still run off a regular 12-volt system.

As a result, there are two batteries, the 48-volt unit (mounted under the rear seat in the RAM 1500 and under the vehicle in the Wrangler) and a 12-volt battery located under the hood.

While the 48-volt circuitry is easily identified by blue cable insulation (and runs from the battery pack along with the floorplan and up through the firewall to the electric motor/generator mounted on the front of the engine), Williams points out that unlike the full-hybrid system utilized in the Chrysler Pacifica minivan, that operates at 400-volts, the eTorque setup does not require special safety equipment when working on it.

An important differentiation between Wranglers and RAMs equipped with eTorque, is not only the battery and electric motor/generator, but also the serpentine belt which is of heavier construction and 1.5-inches wider than a standard belt.

On 3.6-litre Pentastar engines with eTorque, the electric motor/generator uses liquid cooling via an electric pump and radiator/reservoir.

Heat is the enemy of electrical components as much as it is for mechanical parts and due to where the motor/generator is located at the front of the engine, there isn’t adequate airflow across the unit.

Additionally, 2.0L equipped Jeep Wranglers also use the liquid cooling system for the motor/generator and 48-volt battery with cooling integrated with the vehicle’s auxiliary loop.

He also suggests that technicians use ionized water. “Do not use tap water, as it will cause scale build-up and corrosion as it does with every other cooling system.”

On Ram trucks that are equipped with the 5.7-litre HEMI V8 and eTorque system, the motor-generator is actually air-cooled, since flow is much improved due to its location on top of the big V8.

Additionally, to maximize engine cooling, the RAM uses an active air dam located at the bottom of the radiator cradle to maximize airflow to the engine and cooling system.

The air dam is deployed at lower speeds and retracts as the speed increases to reduce drag, since at highway velocity, there’s enough forced air entering the engine bay without needing a spoiler to direct it through.

On HEMI V8s, the eTorque system also serves as a torque multiplier, able to generate an additional 130 lb/ft under acceleration, in addition to providing engine braking when the vehicle decelerates.

A key part of the eTorque system is the hydraulic belt tensioner for the serpentine belt system.

This requires a specific service procedure for removing and installing the belt, with service intervals recommended every 160,000km (100,000 miles).

Williams says that in order to perform this procedure correctly, it’s important to consult the factory FCA service literature which says to rotate the tensioner clockwise, a technician needs to install a 1/18th inch locking pin and compress the hydraulic tensioner using a 2-ft long torque wrench with a 3-inch long extension and ½ inch drive.

Williams notes that it is critical to set the torque to 140 NM (103.2 lb/ft) and use slow and steady force to compress the tensioner and remove the belt.

The reason for doing this is because the tensioner is quite fragile and adding too much pressure or not using the correct wrench can break the tensioner.

He notes that sometimes the tensioner might not feel loose enough to remove the belt. “Wait a few seconds and wait for the fluid in the tensioner to dissipate,” says Williams.

He also noted that when removing and reinstalling the belt, “always refer to the factory service information as FCA wants to make sure everything is done a specific way.”

Williams says that some diagnostics are required when troubleshooting the eTorque system. “With the 48-volt system, there is a specific operating range we need to stay within.”

He referred to the fact that above 51.9 volts or below 42.9 volts the system automatically shuts off in order to protect the control modules and the motor/generator and 48-volt battery pack.

Williams also says that when a technician uses a scan tool and plugs it into the Data-link group, it doesn’t access the 48-volt battery system directly but instead is passed through the hybrid control processor.

On vehicles where the eTorque system utilizes auxiliary cooling for the motor/generator the pump for the cooling system receives instructions directly from the vehicles’ powertrain control module and is able to provide diagnostic information from the pump back to the ECU, enabling it to be read by a scan tool.

Additionally, Williams notes that the module on the motor/generator cannot be accessed directly with a scan tool, it has to be done through a LIN bus communication circuit.

Because the eTorque system is designed to help both the Jeep Wrangler and RAM 1500 maximize fuel economy, even though it can be switched off manually via a button on the dash, it defaults to the “active” setting every time the ignition is switched off.

Because this “active” mode is the default setting, the driver of the vehicle will have to push the off button again, once the ignition has been turned on again, otherwise, the system remains active.

Williams acknowledges there is no way to permanently disengage the system.

Also, in the interests of comfort, the system will re-start the engine, if the cabin temperature gets too hot or too cold during normal operation, even if you are still sat a traffic light or stationary “When the vehicle comes to a stop, if it is a hot day outside, like 36.6 ° C (98 °F), while the accessories and the A/C blower continue to operate when the engine shuts off under coasting, the engine will restart in a shorter period of time.”

Williams also notes that under normal driving, the benefits in fuel economy from the eTorque system are noticeable.