Sales Fell in May, But It’s Not All Bad News

4 June 2020
Jil McIntosh
Autosphere » Dealerships » Sales Fell in May, But It’s Not All Bad News 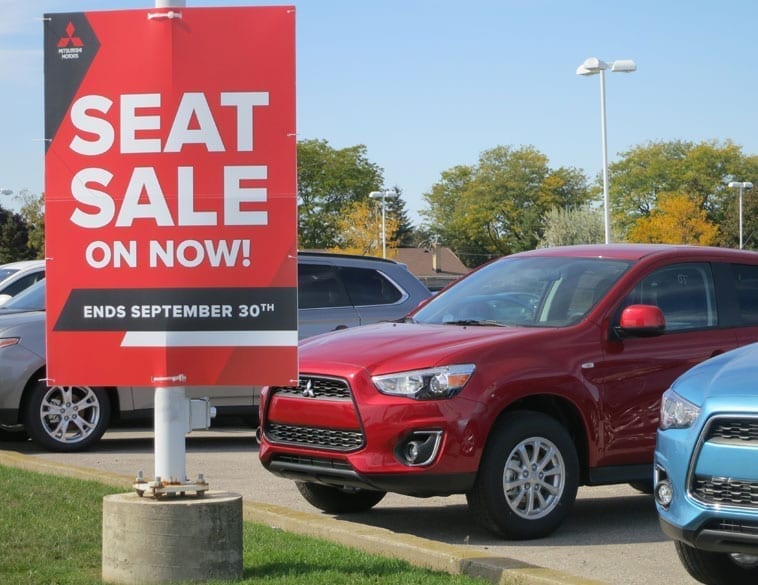 In March 2020, when shutdowns first began in the latter half of the month, sales fell 48% over what they’d been in March of 2019. PHOTO Jil McIntosh

Canadian car sales fell by 45% year-over-year in May, giving us a seasonally-adjusted rate of 1.1 million vehicles, according to a report from Scotiabank Global Economics.

Many manufacturers now only report quarterly sales instead of monthly numbers, so the numbers are only an approximation, but according to DesRosiers Automotive Consultants, an estimated 113,224 light vehicles were sold in Canada in May.

At almost any other time, a y/y drop that sharp would be a disaster, but it’s actually a fairly good sign when compared to what happened the month before. Canadians only purchased 45,833 vehicles in April 2020, the first full month of sales affected by the COVID-19 measures, which was a 75% year-over-year decline from April 2019.

According to The Canadian Press, the sales declines we saw in March, April and May “easily eclipsed” the previous record, when sales fell 27.7% in February 2009 in Canada during the global recession.

Scotiabank reports that in May, as many dealerships began to reopen their showrooms, “some pent-up demand along with bargain hunters drove the rally,” and by the end of that month, those 113,000-plus vehicles caused the sales numbers to rise 127% over what they’d been in April.

Of course, we’re nowhere near a return to normal yet. Keeping that rebound going will depend on jobs, but Scotiabank expects the unemployment rate to rise to around 16%. A million Canadians applied for the new unemployment benefit between mid-April and mid-May, bringing the total to 8.3 million applications.

Consumer confidence is up, but just barely

The Canadian Federation of Independent Business reports that, among its retail members, a 40% month-over-month rebound in April consumer confidence levels slipped to a more modest 6% m/m boost in May. That’s still a positive number, but consumer confidence is going to be key to any recovery.

The COVID-19 pandemic is still creating significant daily increases in the number of cases in Toronto and Montreal, contributing to continued shutdowns in many sectors. That, and a reluctance among many people to go out for fear of the virus and patronize the companies that have opened up – or simply no desire to line up to get into a store if necessary – continue to affect retail turnaround and, correspondingly, reduce employment in that sector.

And of course nothing operates in a vacuum, so that reverberates through the supply chain, continuing to put a damper on a path back to the normal business environment of the pre-pandemic days.

Scotiabank said that “risks still persist,” but in light of May’s improvement over April’s performance, it has given a modest boost to its annual forecast, and is now predicting 1.4 million units for 2020.

By comparison, Canadians bought more than 1.9 million new vehicles in 2019, and that was a drop of 3.6% from the year before.

Sales fall in the U.S. but not as hard

In the U.S., May sales fell 30% y/y, for a seasonally adjusted sales rate of 12.1 million vehicles. The rebound from April to May was only 41%, but that reflects coming up from a shallower dip in April sales than Canada experienced at the peak of pandemic-related shutdowns south of the border.

Intentions to purchase went up by almost 40% m/m in May, but that reflected only a 10% increase over what Americans intended to buy prior to the COVID shutdowns. Scotiabank said this “may reflect more of a shorter-term pent-up demand, rather than a longer-term trend, as the employment outlook paints a more moderate picture.”

Unemployment in the U.S. is already up at 14.9%, and when final figures come in, it could surge to 19% for May. Scotiabank’s forecast for annual sales in the United States has been revised to 13.5 million units. In 2019, Americans bought almost 17.1 million vehicles.

That was a decline of 1.8% from 2018, but was also the fifth consecutive year of more than 17 million sales. Things may get better, but it’ll be a long time before they’ll be back to “best.”