COVID-19 and the Auto Outlook 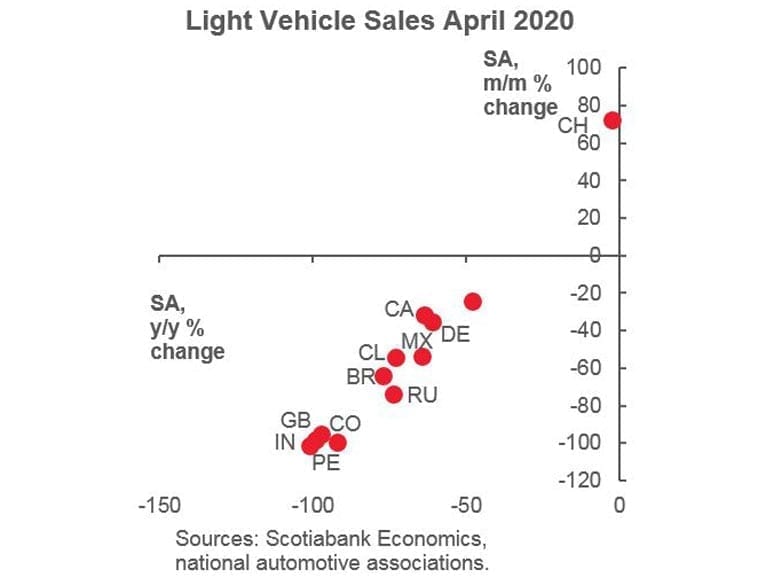 Sales were decimated in April, but a tentative recovery is expected.

The COVID-19 pandemic decimated global auto sales in April, but the North American auto markets face a tentative recovery as economies begin to reopen. Even so, we expect to see a decline of around 25% in new-vehicle sales in 2020 in Canada, the U.S., and Mexico overall.

Worldwide, new-vehicle sales saw a year-over-year drop of 46%, with Canada posting a decline of 75% when compared to April 2019. Most global regions reported large declines, but China did surprisingly well at just 2.5% y/y.

That appears be the result of getting the pandemic under control, along with pent-up demand, increased incentives, and lower vehicle ownership penetration that gives automakers a large market to tap.

The U.S. had a 47% drop, relatively moderate in comparison to most other regions. It’s likely that a patchwork approach to shutdowns across various states helped to soften the decline.

Of the three North American countries, Canada’s 37% y/y drop in the first quarter was the sharpest decline, due to governments at all levels freezing businesses far more aggressively than in Mexico or the United States. The only bright point for dealers was that service departments were deemed essential services by virtually all jurisdictions.

That created an uptick in work orders, and as restrictions on showrooms lift, new-vehicle sales should rise as well with the pent-up demand as the economic recovery takes hold. There is also potential for modest new demand as consumers shy away from public transit over fear of virus transmission.

We expect that April will prove to be the trough for global sales, but it’s still not going to be easy. A Canadian poll by CarGurus in April suggested that only 6% of consumers who planned to buy a vehicle in 2020 have put that off indefinitely, and 16% who hadn’t originally planned on buying in 2020 will do so – but the majority polled will defer their purchase until a recovery is underway, with expectations ranging from three to six months for this to happen.

Robust government transfers are putting a floor under the decline, such as the $2,000-per-month Canadian Emergency Response Benefit (CERB), which is currently going out to two in five in the workforce. But Scotiabank Economics predicts that we won’t reach pre-crisis GDP levels until late 2021 in the U.S., and by early 2022 in Canada.

Unemployment levels will come down from what we saw in April, but they will still be relatively elevated over this period, which will affect new-vehicle demand.

Used vehicles will play a role

Used vehicles should pick up some of the slack, as real or perceived financial issues push some potential new-car buyers to the other side of the dealer’s lot, especially as used-vehicle prices are declining. Spurred by improved longevity, pre-owned vehicles usually make up about 60% of all Canadian sales.

Although we forecast a 10% decline y/y in used vehicles for 2020, we expect to see an acceleration in sales activity as the year advances, and then a healthy rebound in 2021. There will be a lot of vehicles hitting the used market in the next little while.

Leasing grew in popularity over the last few years and these cars are coming off their plans, while rental companies hit hard by COVID-related travel restrictions will be taking cars off their fleets at an accelerated level.

New-vehicle sales will also be affected by supply, as automakers halted production across the continent for employee safety, or due to supply chain disruptions. Wards Automotive reported an 89% y/y decline in North American production in April.

This will likely lead to more balanced supply and demand, with fewer vehicles sitting on dealer lots, although there may still be issues with dealers getting enough of some models.

Prices will be subdued

Without a glut of inventory, consumers shouldn’t expect to see substantial price incentives. But vehicle prices overall are expected to be subdued, albeit with some volatility in the coming months. We expect these lower prices to persist for some time, although production costs may eventually pressure a rise in price, especially if there is an aggressive shift toward moving supply chains back to North America and the costs associated with it.

Everything is having an effect on the market, and there are a lot of variables to consider. Used vehicles are showing an approximate 3% decline below pre-crisis levels in the U.S. and Canada, and wholesale prices are expected to fall by 17% in 2020 overall.

Residual values are declining, which will erode the affordability of replacement options, especially in market segments where negative equity has been growing.

On the other hand, low-cost financing should increasingly help sales. Low fuel prices are also improving vehicle affordability, although this may turn out to boost a shift to larger vehicles, rather than spurring more vehicle sales.

Overall, the North American auto market will largely be driven by demand. Supply will influence price, which could shift what vehicles are purchased, but it’s customers who will ultimately guide the market.