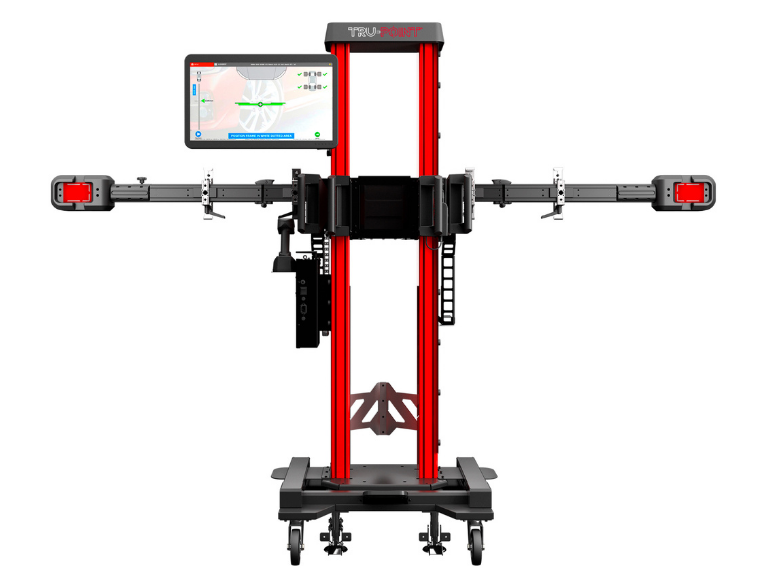 The John Bean Tru-Point is an ADAS calibration system that verifies whether a vehicle is aligned before the technician performs a calibration. PHOTO John Bean

These camera-based systems require the use of equipment that goes way beyond simply making sure all the wheels are facing the same direction.

“Today, whenever you change a windshield, a mirror, a front bumper or rear bumper, you have to keep in mind technologies like lane assist, adaptive cruise control, and the like,” he says. “A lot of these technologies depend on cameras now, whereas before it used to be just through sensors.”

The danger, Nieman explains, is that you can do an alignment on a vehicle, but if you don’t calibrate the ADAS systems properly, you could be legally liable if the vehicle is involved in an accident.

“If you don’t do it properly, the sensors won’t know where the vehicle is,” he explains. “So the vehicle will be given the wrong information, which could lead to a major accident. If that happens, the person who did the repairs is going to be the one that’s at fault.”

Ronald Racine, Snap-on Equipment Technical Training Manager, North and Latin America, explains how complex an alignment and ADAS calibration on a vehicle can be.

“The vehicle has a spec,” Racine says. “It’s been constructed in a certain way and it sits on the ground a certain way. So technicians really have to follow preconditioning procedures before even doing an alignment.

“In the old days you’d just throw it on the alignment rack and do the alignment, but today the electromechanical power steering actually may control the vehicle on behalf of the driver.

“So if that’s not set up correctly, you may get a complaint from the owner after an alignment, that the car is pulling. But it’s not actually pulling; it’s being steered because the procedure wasn’t followed correctly.”

Racine explains that the “electromechanical power steering systems have sensors and controllers providing features such as, pull, drift, road crown and cross wind compensation. These features were previously corrected by the alignment technician but are now part of the automated driving strategies of the newer vehicles.”

John Bean is one of the companies addressing the challenges technicians face when working on a vehicle with ADAS. The John Bean Tru-Point, for example, is an ADAS calibration system that verifies whether a vehicle is aligned before the technician performs a calibration. Then, it validates that the job was done correctly.

Tru-Point audits the vehicle’s alignment and monitors each step of the setup procedure, assuring that the process has been completed to meet OEM safety specifications before an ADAS calibration procedure.

It’s also very flexible. “While most systems function by referencing the height of the vehicle from the shop floor, our system measures the height of the targets from the tire contact patch of all four wheels, allowing for the vehicle to be calibrated anywhere in the shop, even on an alignment rack,” said Jordan Krebs, Product Manager for John Bean.

Krebs notes that ADAS is changing the way alignments are performed by requiring technicians to focus on a full four-wheel alignment instead of the historically faster two-wheel alignment.

“Two-wheel alignments are great for high-volume locations where the mantra is ‘set toe and go,’” he says.

“However, this does not ensure the rear alignment values are properly set, affecting ADAS components such as automatic cruise control and lane-keep assist. Technicians today need to be able to perform a full four-wheel alignment without sacrificing the time they would gain by simply performing a two-wheel alignment.”

One of the innovations in alignment technologies is a touch-less system introduced by Corghi—the R.E.M.O. 4 (Robotics Equipment for Measuring by Optics).

“The traditional way of doing alignments is to put targets on all four wheels,” explains Mario Mercier, National Account Manager for Duret et Landry – Corghi Canada. “But with this new technology, there’s actually no target on the wheel.”

Mercier says four small robots employ lasers to find each wheel, regardless of the height of the vehicle. The robots them perform a diagnostic on the alignment without ever touching the wheel, tire or vehicle (N.B.: The technician still has to touch the vehicle to adjust the alignment).

“It’s fast and extremely precise,” he adds, “and it saves a lot of time because you don’t have to install and remove targets.”

The R.E.M.O. 4 has been available in Europe for four years, and will soon be coming in Canada.