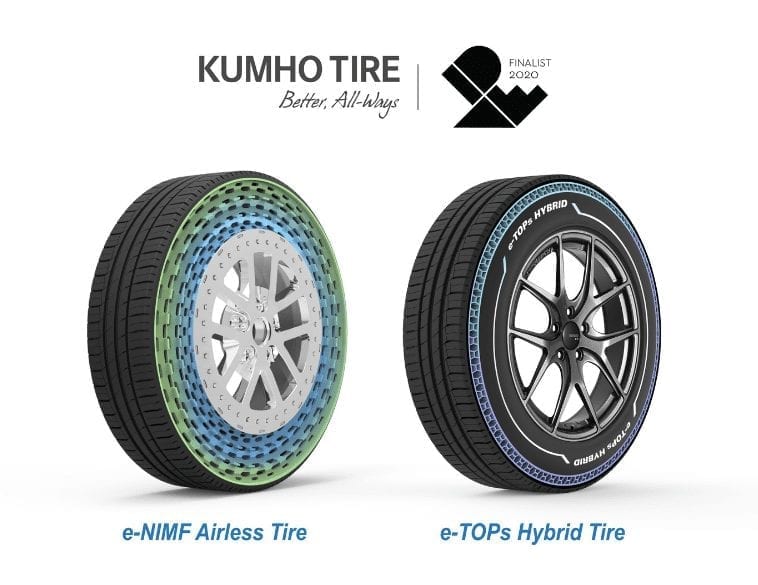 Kumho Tire has received the Finalist award at the International Design Excellence Awards (IDEA) 2020 in the transport device discipline for two of its future-oriented tires that are targeted at the next-generation car market.

With its earlier wins at the iF Design Award in February and the Red Dot Design Award in March in addition to the IDEA Awards, the company has now achieved the feat of winning all of the world’s top three design awards for this year.

The winning entries for Kumho are the e-NIMF (eco-friendly, no-inflation, and maintenance-free), an airless concept tire made with future-oriented technologies, and the e-TOPs (eco-friendly, topology-optimized, and punctureless), a hybrid tire. In response to the future automobiles market in which eco-friendly and self-driving cars are expected to dominate, Kumho tire is developing tire technologies that will ensure almost the same performance as existing products and prevent accidents attributable to tires during driving.

A tire not supported by air pressure, the e-NIMF has been developed for the next-generation car market. Airless tires offer excellent driving stability and do not require maintenance work to address air pressure loss. Unlike conventional tires that need to be discarded and replaced due to tread wear after long periods of use, airless tires can be used almost permanently by simply replacing the tread. This retreading technology is environmentally friendly and helps save maintenance and expected costs as well as time.

Compared to pneumatic tires, airless tires in general are considerably low in performance in terms of durability, noise, vibration, and rolling resistance. However, with countless tests and simulations on the shape, material, and manufacturing method of the tire’s spokes, which have led to a new design of spokes that run in the direction of circumference and width, the performance was increased. In addition, heat fusion has been adopted for the sake of manufacturability.

Airless tires have features to prevent safety issues that arise from the loss of inside air, but they usually lag behind their pneumatic counterparts in terms of ride comfort and handling stability due to their spoke structures. Featuring the combined strengths of both pneumatic and airless tires, the e-TOPS is a hybrid model that is targeted at the future tire market.

The upper part of the e-TOPS consists of the spokes and the tread that touches the road to prevent foreign matter from causing air loss, while the lower part contains some air inside. This mutually complementary structure helps maintain the basic performance of regular tires and resolve air loss issues, which makes the tire a future-oriented model that ensures both driving performance and stability.

“For the past few years, we have been developing a range of products such as airless tires in active response to the future car market, and our win of the IDEA Awards represents Kumho Tire’s future-oriented design and technological prowess,” said Jung Il-Taik, senior vice president in charge of research and development, “We have focused our research on airless tires and have also expanded into the area of hybrid tires that have the strengths of both pneumatic and airless tires. We will continue reinforcing our design and technological capabilities going forward to deliver both safety and convenience, the two most important qualities that our customers look for in our products.”