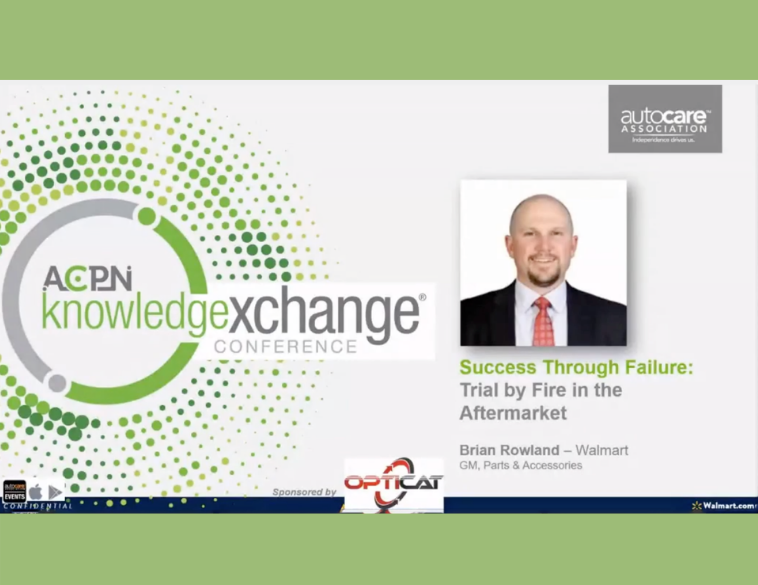 Trial by Fire in the Aftermarket, presented by Brian Rowland featured some interesting case studies and insight into the auto parts e-commerce business. PHOTO ACPN

Many of us strive to be successful. The automotive aftermarket is one of the most resilient and dynamic industries going and it’s also seen many people within it achieve incredible success. Yet that success doesn’t always come easy and often what appears to be smooth sailing and an obvious rise to the top was often pre-dated by numerous trials, errors and struggles.

Rowland who currently serves as General Manager Automotive Parts and Accessories for Walmart, is an avid car guy, who shared his experiences of owning his dream ride, a 1969 Chevy Camaro Z28 which itself proved to be an eventful experience!

Regarding the aftermarket, Rowland has been actively involved in the industry since 2008. Attending his first AAPEX show he recalls that coming from an e-commerce background how difficult it was at the time to engage with manufacturers and solicit business.

It proved a frustrating experience, but in Rowland’s case, it led to something much better. He joined the National Catalog Managers Association (NMCA) and after meetings and sessions at NMCA events, would arrange networking opportunities designed to get to know attendees better.

It proved successful and Rowland said that it emphasized to him that when faced with a problem or challenge, the best way is to go around it, over it or under it, rather than trying to go straight through it.

During his time at a U.S. Auto Parts (now known as CarParts.com), Rowland said that the decision by the executive board to bring in a performance coach proved to be a huge benefit, providing the company with a 360-degree assessment of the managerial team. Rowland noted that while this is often good, it can also be a tough look in the mirror at some of the areas that need improvement.

Such as, reacting to a problem rather than taking a pro-active approach to solving it, as well as addressing issues of working in silos, as opposed to having a true, team-oriented approach to the business.

Based on his own experiences, Rowland said he highly recommends organizations utilize an executive coach and have a 360-degree assessment performed to assess both the strengths and weaknesses of their leadership teams and to better position them for success in the future.

Rowland explained that when it comes to leadership roles within an organization, a key trait highly successful leaders have in common is that they listen first and react second. Also, successful organizations are ones that focus on customers, focus on building better experiences for them and solving problems.

Rowland recalled his tenure at one particular company where the emphasis wasn’t on customer service or experience but increasing web traffic and maximizing quarterly financial returns.

Overnight, when Google Panda was introduced, the company saw a 25 percent drop in online traffic. To help regain market share, a proposal was put together to assemble a dream team to solve the problem and create a bona fide solution to regain market presence and sales.

Instead, the CEO of the company ignored the advice presented to him, believing that the creative spinning of content through different synonyms from all the dominant words in a single catalogue, would enable the company’s digital marketing to fool Google, meaning minimal investment was required—leaving the company to focus on its quarterly sales and revenue targets.

The result backfired, creating a huge loss in productivity, and two painful lessons learned, notably that you’re probably not going to outsmart Google and secondly, that listening is better than winning, meaning that in order to be successful, focus on earning your customers’ loyalty and deploying the resources you control as effectively as possible.

“If you follow those two golden rules of business,” said Rowland, “focusing on the customer and investing their money like you would if it were yours, you will make the right decision 95 % or more of the time.”

Additionally, Rowland presented another interesting scenario, in how one company’s focus on its financial obligations can have a negative impact on its vendor customers.

He cites a discussion with a major client about how a tactic of stringing along vendors to meet financial obligations was literally killing the client’s business due to the lack of cash available to acquire more raw materials to feed new product orders.

For Rowland, this was a major lightbulb moment, in understanding the larger picture and how being successful in the performance aftermarket segment means focusing on your vendor clients first before your own targets and obligations.

He noted that when faced with situations like this and a potential timebomb, it is far better to address the elephant in the room as quickly as possible and take a direct stance to solve the issue instead of trying to avoid it.

“The more contentious the issue, the more direct you need to be and the faster you need to deliver the message.”