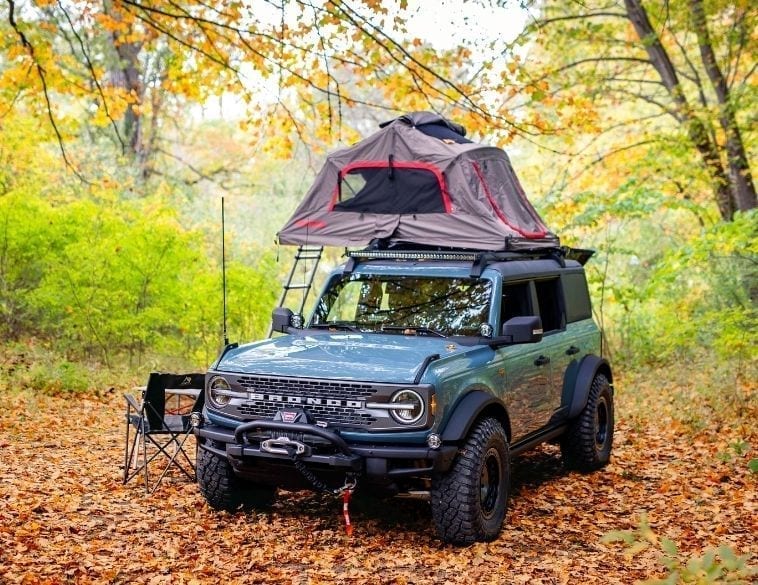 Horses and horsepower a key theme in Ford’s virtual showcase.

Arguably one of the most talked about vehicles of the year, is the 2021 Ford Bronco. Although we haven’t got a chance to see it in person at SEMA this year, Ford has ensured that it was front and centre for the SEMA360 Virtual Experience. In a video entitled SEMA360: In the Gararge with Jay Leno, Mike Spagnola, SEMA VP, OE Relations and Jay Leno got up close and personal with the new Bronco—a fitting occasion since this time, last year, Leno revealed the restomod 1968 Bronco with a Shelby GT500 engine at SEMA.

The new Bronco was designed from the outset to be accessorized and Spagnola remarked that SEMA and aftermarket parts and accessory manufacturers are very keen to get their hands on the new SUV. In the meantime, Ford teased us with a video walkaround of a fully kitted out 2.3-litre, six-speed manual; four-door Bronco Badlands OG Concept with an Overland theme build. Features included exterior lights all the way around, carbonized MIC hardtop, two-person Yakima camping tent, Ford cargo management system, ARB fridge/freezer, built in tailgate table/work surface, Ford modular performance front bumper with the Warn 10,000 lb capacity winch and of course 12-inch screen with Ford SYNC-4 that can run either Apple CarPlay or Android Auto.

Shifting from one horse to another, the Mustang Mach 1 also returns for 2021. Designed to bridge the gap between the regular Mustang GT and Shelby GT350, the new Mach 1 comes with a specially calibrated 5.0-litre V8 engine rated at 480 hp and 420-lb-ft of torque. Teamed with a Tremec six-speed manual gearbox or 10-speed automatic transmission, the Mach 1 comes with unique steering, suspension and chassis tuning; specially finished aluminum wheels, unique paint and stripe accents, as well as special aerodynamic aids included as part of an optional Track Package. It goes on sale in the U.S. and Canada in the Spring of 2021.

Ford also took SEMA360 to highlight its electric performance builds, namely the Mustang Cobra Jet 1400 and Mach-E 1400 (named due to their equivalent horsepower output) designed to compete in drag and road racing/drift/time attack arenas respectively. There was also highlights of the 2021 Ford GT, as well as a range of performance and styling enhancements for popular models including the Bronco, Mustang and F-Series trucks.