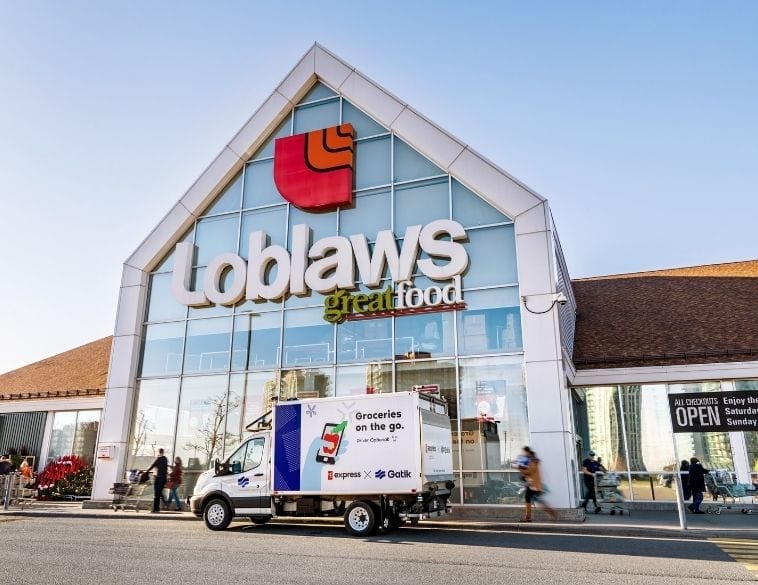 Self-driving autonomous vehicles are usually in the news for consumers, but they’re going to be perfectly suited to commercial use, and there’s a lot happening in that sphere. Toronto-based grocery giant Loblaw has partnered in a multi-year deal with technology company Gatik, of Palo Alto, California, to deploy autonomous deliveries for short-haul business-to-business (B2B) deliveries.

When it fully launches in January 2021, it will be Canada’s first autonomous delivery fleet. “Currently we have one autonomous vehicle on the road, and we will add four trucks in January to support orders from our automated picking facility,” said Lauren Steinberg, senior vice-president of Loblaw Digital.

“As more Canadians turn to online grocery shopping, our business is looking at ways to make our supply chain more efficient, and middle-mile autonomous delivery is an example of one way we think we can achieve that,” she said.

A two-year project, and possible expansion

The two companies successfully completed an on-road pilot project in Toronto over ten months with that first vehicle. The larger project is expected to last two years, after which time the grocery company will decide whether to expand it into a larger service.

While the trucks run their routes using their own guidance, they have human co-drivers onboard as well, as required by Canadian regulations. “Our fleet of autonomous box trucks operate at a level known as ‘constrained’ Level 4,” said Gautam Narang, CEO and founder of Gatik. “All dynamic driving tasks are carried out by the vehicle within their operational design domain, (which are) fixed, repeatable routes on the supply chain’s middle mile.”

The trucks are based on Ford Transit 350 chassis, specially fitted for Loblaw with refrigeration, liftgates, and the proprietary self-driving software. Narang said the system has a fully-loaded sensor suite, including 360-coverage cameras, 128-beam and 16-beam LIDAR systems, and long- and medium-range radar and GNSS (global navigation satellite system). “Our vehicles are designed to operate within complex urban and semi-urban environments,” he said. “The routes our vehicles will be travelling on to deliver goods from Loblaw’s automated packing facility to retail stores across the Greater Toronto Area all fall within these categories.”

One of the major concerns with autonomous vehicles – and one of the reasons we aren’t all sitting back and letting our cars drive us right now – is that they have to deal with an unbelievably huge number of obstacles and safety factors, including traffic signals, pedestrians and cyclists, and the rest of the traffic flow, which right now is controlled by humans, and not by software that can communicate with the self-driving car so each knows what the other is doing. That is, of course, one of Gatik’s main focuses.

“The safety of all road users is at the heart of our operations,” Narang said. “We operate exclusively on fixed, repeatable routes.” That approach is known as structured autonomy, he said, and it’s safer and more efficient than other autonomous vehicle applications “because it enables us to constrain the challenge of autonomy, thereby heavily over-optimizing our delivery routes and minimizing edge-cases.”

A hybrid approach to self-driving

Gatik said that, to date, it has completed more than 30,000 revenue-generating autonomous deliveries for several customers across North America. The Loblaw vehicles will operate seven days a week, 12 hours a day, on the five routes with fixed pick-up and drop-off locations. When it’s fully launched, the contactless delivery system is expected to complete about a thousand orders a day.

According to Narang, his company uses a hybrid approach, known as Explainable AI, to the system architecture, implementation, and validation of self-driving vehicles. Gatik breaks down Deep Neural Networks – layers of artificial intelligence – into micro-models. These smaller chunks of AI are restricted to a very specific task, and then rule-based fall-back and validation systems are built around them. These models, with their relative simplicity and established gate-keeping methods, ensure the continued safety of the system overall.

In addition to reducing costs and improving safety for fleets, these pioneering autonomous vehicles are themselves moving the technology forward with every crate of goods they deliver. Numerous companies are doing real-world testing with everything from tiny hatchbacks for consumer use, to tractor-trailers for long-haul deliveries. Each one gathers data on how to deal with roads, signals, other traffic and road users, navigation data, and weather conditions, with the goal of consistent improvement in the self-driving sphere.

“It’s still very early in the pilot to tell what the future holds,” Steinberg said. “But I can tell you that the idea is to enhance supply chain elasticity, and help the business meet increasing e-commerce demand.”