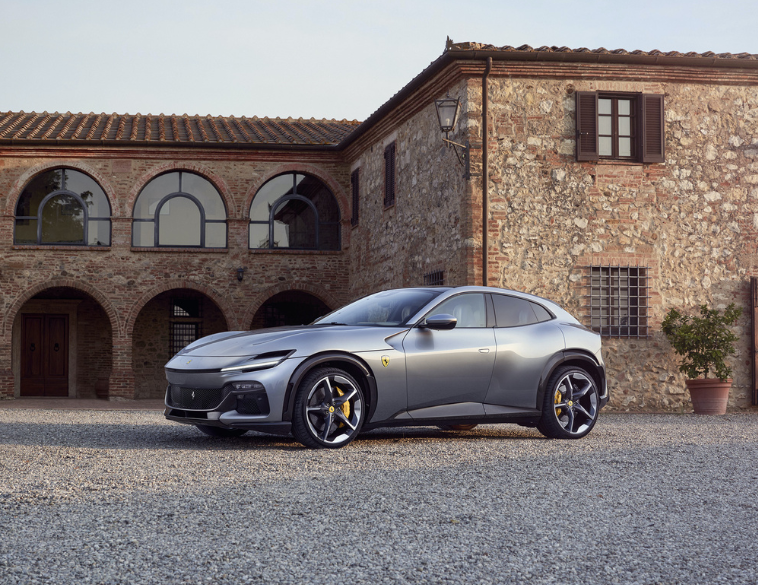 Deliveries of the 2023 Ferrari Purosangue will begin in Q4 of 2023. Photo Ferrari

Not your typical grocery-getter, this thoroughbred CUV promises the pure Ferrari experience that aficionados of the brand expect.

Ferrari seems to be jumping on the crossover bandwagon with the introduction of the Ferrari Purosangue (Italian for ‘thoroughbred’), their first-ever four-door, four-seater. However, the company is quick to point out that they are not planning to abandon tradition, and will remain true to their heritage.

According to Jeffrey Grossbard, a spokesperson for Ferrari North America, “this is a car that has been in gestation for a long time, and was officially announced in 2018 by Mr. Marchionne.”

Unlike typical crossovers, which are designed with an engine that’s mounted forward in the vehicle, the Purosangue has a mid-front-mounted engine, allowing for a 49:50% weight distribution. Moreover, this is no run-of-the-mill powerplant. Ferrari has decided on a naturally-aspirated 6.5-litre V12 that pumps out 715 horsepower at 7,750 rpm, and 528 lb.-ft. of torque at 6,250 rpm, with 80% of that torque available at 2,100 rpm.

This stunning V12 is coupled to an 8-speed dual-clutch transmission, and promises to propel the Purosangue from a dead stop to 100 km/hr in 3.3 seconds.

Ferrari points out that the Purosangue’s chassis is, “completely new and was designed from scratch with the aim of producing a structure of uncompromising rigidity.” The result is a lightweight yet strong design.

The body is made from a variety of materials, including aluminium and carbon-fibre. High-strength steel is employed in key areas for added structural integrity. One of the more intriguing design features is the use of suicide doors for rear passengers, which Ferrari says makes ingress and egress easier, “while keeping the car as compact as possible.”

Ferrari is introducing an innovative feature on the Purosangue: Customers are being offered the opportunity to personalize the roof of their car. They can opt for the standard carbon-fibre roof, or they can upgrade to a full-length electrochromic glass roof. The latter is coated with an electro-sensitive film, and can go from fully-transparent to fully-tinted, and vice versa, with the push of a button.

Inside, designers created a space that’s luxurious and elegant, but sporty. It’s also thoroughly modern and boasts a 10.2-inch display and an entirely digital user interface.

And since no modern vehicle is complete without smartphone connectivity, Ferrari has announced that, “for the first time, the car also offers compatibility with Android Auto and Apple CarPlay systems as standard. These substitute the traditional built-in navigation system.”

Another first: For the first time in Ferrari history, the cabin has four separate and independently-adjustable seats. All are heated, and the front come with a massaging feature. Sustainable materials have been used extensively in the Purosangue. The roof lining, for example, was made from recycled polyester, and the carpet is made from polyamide recycled from fishing nets retrieved from oceans.

The fact that Ferrari called this model Purosangue, or “the thoroughbred,” suggests that they were sensitive to how this vehicle would be received by Ferrari fans. While it’s true that Ferrari is straying from tradition by bringing to market a four-door, four-seater crossover, the Purosangue moniker reminds everyone that this is still very much a thoroughbred Ferrari.

Here’s how Ferrari explains the matter: “The Purosangue name beautifully describes the car’s architecture. Its sleek, athletic exterior sets it apart from other four-door, four-seater cars on the market, and the mid-front-mounted naturally-aspirated V12 combine with a sublimely comfortable, luxuriously roomy and impeccably appointed cabin. This is not just an incredibly fast, agile car but it also offers the space on board to ensure exceptional comfort for all four occupants.”

Ferrari’s Grossbard stresses that Ferrari will not follow in the footsteps of some manufacturers to become yet another crossover-focused brand. “Purosangue production will not account for more than 20% of total Ferrari production,” he explains, “and so the approach here is more limited than perhaps other manufacturers have allowed.”

Grossbard adds that the Purosangue will open up new opportunities for the company as this new model attracts both Ferrari owners, as well as newcomers to the brand. “Our target client is a driving enthusiast who wants to drive a true Ferrari with the comfort and versatility of a sporty, luxury four-door, four seater. It will open a new segment to attract different Ferraristi, but also enable our existing Ferraristi to enjoy another model that can be used in different moments than perhaps other models in the range.”

Pricing for the Purosangue will be released closer to the launch date, and Grossbard says deliveries will begin in Q4 of 2023.