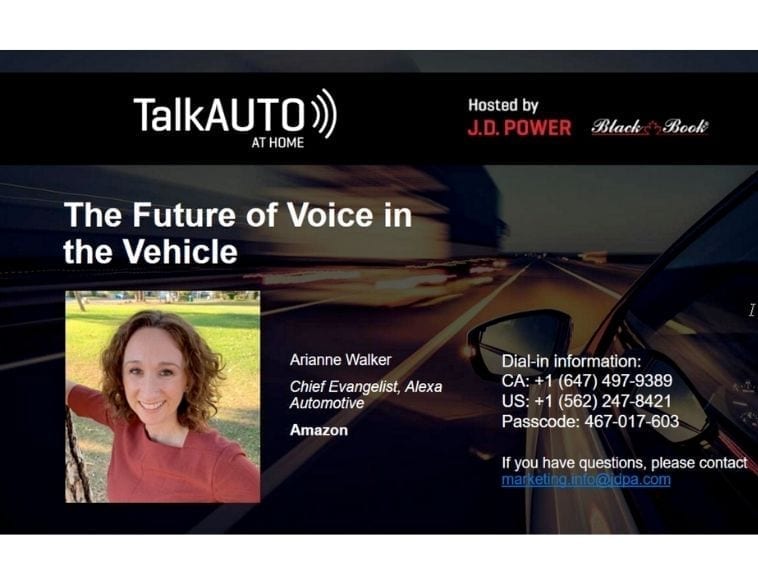 Arianne Walker, Chief Evangelist, Alexa Automotive at Amazon provided a fascinating insight into the future of voice in the vehicle. Photo: TalkAUTO

Why devices such as Alexa are becoming an increasingly important part of personal transportation.

When it comes to vehicle satisfaction among consumers, one aspect that repeatedly comes up as being the most frustrating, concerns voice assistance and commands within the car.

Although voice activation features have been offered in vehicles for approximately 15 years and the technology is projected to be embedded in around 90 percent of the world’s vehicles by 2028, there is still significant room for improvement in terms of how these systems operate and how they are able to recognize instructions from the driver or passengers in the vehicle.

At the recent TalkAUTO 2020 virtual conference presented by J.D. Power and Canadian Black Book, Arianne Walker, Chief Evangelist, Alexa Automotive at Amazon, gave some insight into the existing challenges traditional voice command software poses for consumers and OEMs—how the technology is evolving and some of the solutions companies like Amazon are bringing to the table.

She also provided a glimpse into the future, both near and longer term, in how voice activation might evolve, as technology companies and automakers strive to integrate a virtual assistant that is able to seamlessly transition from home to vehicle and back again.

Walker said that the ongoing frustration among consumers related to in-vehicle voice activation features has presented an opportunity for companies like Amazon to bring devices such as Alexa into the vehicle and change the way in which these systems operate.

She noted that implementing such a strategy effectively, requires identifying where the key pain points are. To that end, Amazon teamed up with J.D. Power and surveyed more than 5,000 consumers to understand what their expectations for voice technology actually were.

The first set of challenges revolved around the lack of features that traditional systems offered, which tended to be limited and focused specifically on the vehicle.

The second was how these systems didn’t actually operate in the way consumers wanted them to, with problems recognizing speech no matter how slowly instructions were dictated and not able to perform the tasks asked—a major source of frustration for consumers.

The third issue was that with traditional systems, consumers have to ask very specific things in a specific order in order for the voice recognition to actually understand the command.

Fourth and finally, another issue concerned the content to which the system had access, which was often outdated even before the customer took ownership of the vehicle.

Understanding these key pain points with traditional systems, provided J.D. Power and Amazon with a foundation on which a new generation of systems could emerge, ones that were more advanced and would allow consumers to experience a more natural and conversational experience with voice activated assistance features.

Walker pointed to study findings which saw that a cloud-based in-home voice assistance device like Alexa score 7.43 out of 10 on J.D. Power’s study index, while an aftermarket device plugged into the car, such as a smartphone, scored 7.0. On the other hand—cloud-based systems embedded into the vehicle infotainment scored a much higher 8.08 out of 10.

“By bringing in these more advanced systems into the vehicle, we are able to provide a much better experience for consumers across the board,” said Walker.

She referred to J.D. Power study findings that point to the fact that two thirds of surveyed consumers wanted voice assistance in the vehicle to be the same brand as they use at home and that consistency from home to vehicle and back was a key part in consumer acceptance of the technology.

Many consumers have also said they want their voice assistance system to do more than just provide car features such as warning alerts, service notifications and driving conditions. According to Walker, almost two thirds of those J.D. Power surveyed wanted their system to be able to provide information such as available parking spots and the cost for parking, as well as being able to add things to their list of daily tasks, such as groceries, or connecting to their calendar of activities and scheduled appointments.

“It’s all those things that circulate in your mind as you’re driving,” said Walker, “so you don’t have to take your hands off the wheel or your eyes off the road.”

Integrating voice assistance into the vehicle seamlessly and easily has essentially become a mantra, and at Alexa Automotive, working with both vehicle OEMs and Tier 1 suppliers is critical in order to do this effectively.

Alexa has worked toward this by developing its Software Development Kit (SDK) that focuses on four core areas to create an out-of-the-box experience that OEMs can then embed into the vehicle’s infotainment system.

Walker also noted, that systems such as Alexa could really become your virtual assistant, being able to prepare your car for the journey such as defrosting the windows while you are just finishing breakfast and setting the optimal cabin temperature, etc.

“We have heard across the board that consumers have wanted to be able to connect with lots of different features and it is the developers who create all of these skills that really make Alexa so useful, interesting and fun,” said Walker.

She noted that some of these developments include services such as roadside assistance, helping with parking information to even finding out where gas stations are located and even use Alexa to pay for the fuel without having to get out your credit or debit card.

“We made an announcement at CES back in January about this feature that is now available in the U.S. and hopefully will soon be in Canada too,” said Walker. She was referring to a partnership between Amazon and Exxon Mobil, where some 11,000 filling stations allow consumers with Alexa to confirm the pump number at the gas station they drive up to and then Alexa takes care of the payment process.

These kinds of technologies are likely to become more commonplace in the vehicles we purchase and drive over the coming years and Alexa Automotive has also partnered with a number of OEMs to embed this cloud-based voice assistance technology directly into the vehicle.

Additionally, some automakers, notably General Motors will allow over-the-air software updates for 2018 and newer vehicles that didn’t originally come with this voice assistance technology, potentially providing access for millions of additional motorists to this type of service—an important consideration, especially as the used car market continues to grow in this COVID-19 era.

Ultimately, by integrating these increasingly advanced voice assistance technologies into the vehicle’s DNA, we could see a future where a fully interconnected home and vehicle become an integral part of helping make our lives easier, safer and more productive.