Planning for the Future

5 May 2020
Huw Evans
Autosphere » Dealerships » Planning for the Future 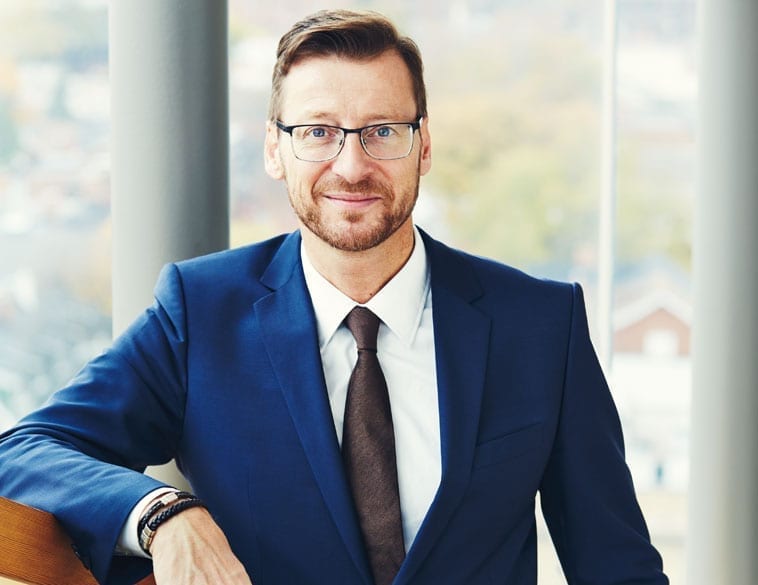 Hoffmann said that several factors are likely to change the automotive sector at least over the short-term. (Photo : Jaguar Land Rover)

Jaguar Land Rover CEO Wolfgang Hoffmann believes one of the biggest things to come out of this crisis is the strength of OEM and dealer relationships.

On April 30, Templeton Marsh presented the second in a trio of webinars designed to provide dealers with insight during the COVID-19 pandemic. Samir Akhavan, Managing Partner at Templeton Marsh hosted the event with Wolfgang Hoffmann, President & CEO, Jaguar Land Rover Canada joining him has guest speaker.

During the webinar, Hoffmann discussed a variety of topics, ranging from a global and North American economic overview as a result of COVID-19, to specific issues related to the automotive sector, including both manufacturing and retailing as well as key factors currently influencing the Canadian market.

Hoffmann noted, that even as of April 30, one of the biggest concerns remained the fact that the COVID-19 situation continues to change and change rapidly. He said that different projection models are leading to different scenarios and outcomes related to virus transmission. Referring to Canada, he said there was still evidence to show that the curve isn’t flattening fast enough and that governments across the country are still being extremely cautious when it comes to making statements and enacting plans to reopen the economy.

As has been predicted, GDP growth has seen a dramatic decline from the first quarter of 2020 in both Canada and the U.S. Where the latter is concerned the drop has been almost 5 percent with predictions for Q2 coming in at around 17 percent.

Hoffmann said however that in Canada, the decline has not been so dramatic as in the U.S. and “that surprised me.” And while there are predictions that 2021 will see a more positive economic outlook, going into the COVID-19 crisis, Canada was already witnessing an economic slowdown with only modest growth being witnessed in Q4 of 2019 (around 0.3 percent).

And although the figures in jobless claims are staggering, both here and in many other industrialized countries, Hoffman said that as far as Canada is concerned, another major issue is debt to income ratio, which at $1.77 for each dollar earned is higher than in the U.S. something that needs to be closely observed going into a recession.

He also predicted that we could see unemployment reach 10-13 percent during May and while all these statistics are scary, Hoffmann noted that for businesses, including automotive retailers—an even bigger question is how COVID-19 will really impact consumer mindset and spending patterns moving forward.

What will likely determine everything for us in our industry is whether people will be making big-ticket purchases again once this crisis is over, or whether they will defer if they can.

Nevertheless, he noted that a traditionally sizeable vehicle lease portfolio in the Canadian marketplace will likely be an asset to both dealers and OEMs once the economy starts to gear up again.

Not how deep, but how long

He also noted that in terms of economic fallout, the question is not so much how deep of a recession we’ll be facing but how long and whether the recovery is V or U-shaped. “If the crisis continues for 2-3 months, as many experts believe it will, this will likely be manageable, if it happens to go on much longer, we could be in very big trouble.”

Noting trends on the horizon, Hoffmann said that it is expected that Asian markets will recover first and countries like Australia and Canada with high household debt to income ratios could see significant de-leveraging, as consumers shift toward saving.

For dealers, Hoffmann said that prior to COVID-19 the automotive sector was already seeing profit warnings and the heavy investment many OEMs had been placing on alternative propulsion such as Battery Electric Vehicles and Autonomous technology had been eating significantly into margins.

On top of that, many OEMs shut down assembly plants due to COVID-19 and with no cash coming in, liquidity for both vehicle manufacturers and their retail network partners became a major concern.

As we move forward, Hoffmann said that several factors are likely to change the automotive sector at least over the short-term. These include low fuel prices due to oil fluctuation (around $30 per barrel at present), the belief that many consumers will hold off new vehicle purchases for the next several months, or if they do are likely to look at lower price points than previously and the cancellation of many ambitious OEM projects such as hydrogen fuel cell development and possibly autonomous technology initiatives.

Hoffmann said there is some potential good news on the horizon. While automakers have seen ride sharing programs essentially dry up, many people (around 14 percent of the population) who previously took public transport, taxis or ride sharing services are now likely to consider a vehicle purchase and that lower fuel prices and attractive lease options could mean good opportunities for volume focused OEMs and traditionally profitable segments such as pickups and SUVs, at least in the short term.

As for the luxury segment, Hoffmann said that premium sales could come back fairly quickly, though a lot of that will depend on the willingness of consumers. Following the Great Recession of 2008-09 he noted that in some cases, premium demand for brands matched or in some cases exceeded growth volumes for more mainstream vehicles and that prior to the current COVID-19 crisis, brands such as Jaguar and Land Rover were fairly well positioned in the marketplace.

Regardless of how sales volumes fare, Hoffmann said it was important for both OEMs and their retail partners to work together and ensure there is more than adequate inventory available, should pent up demand need to be satisfied fairly quickly.

Hoffmann also believes that coming out of the COVID-19 situation, there will be increasing use of digital tools in society as part of a “forced industrial revolution,” and infrastructure projects are likely to see a boom in job growth over the next few years.

“Infrastructure projects bring a lot of people back to work again and data shows that good infrastructure and the countries and cities that have it, results in much higher overall GDP growth than those areas that do not have it.”

As per the previous webinar, attendees were invited to submit questions and some of the key points brought up included the future of auto retailing and the electrification process.

Hoffmann believes that as a result of COVID-19 the digital aspect of automotive retailing will gain greater importance, with an emphasis on virtual test drives and product experiences, at least for the near term.

The crisis has shown that dealers are able to essentially deliver a contactless retail experience and this, combined with a growth in vehicle pick-up and delivery service whether for sales departments for fixed ops, looks set to continue—even as dealers plan to slowly reopen showrooms across the country.

As for vehicle electrification, Hoffmann said he believes that it is still the way of the future, though for dealer service departments in particular, there will still be many years where internal combustion engines are likely to present the majority of vehicles in circulation and a continued solid source of profit for fixed ops.

“Even far into the future,” he said, “there will be other opportunities on the retail side to sell products and services to customers. Because people might not be spending as much on vehicle repairs, they will likely have more disposable income available for other things.”