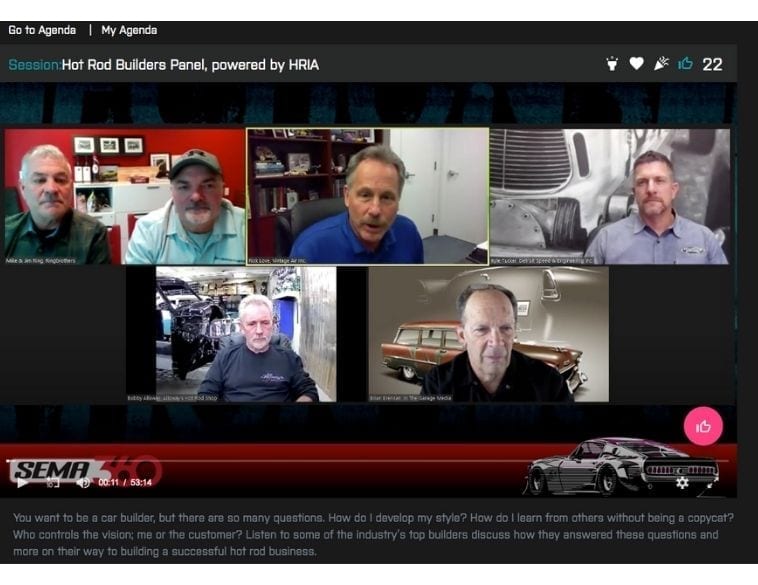 On November 5, SEMA360 hosted a Hot Rod Builders Panel discussion with some of the industry’s most famous names. Photo: SEMA

Hot Rods and Customs are some of the most celebrated vehicles on the planet. Yet what does it take to become a master hot rod builder and more importantly, how can this amazing craft continue for generations to come?

These were some of the discussions that took place during the SEMA360 Hot Rod Builders Panel, which brought together some of most recognized names in the industry. These included Jim and Mike Ring of Ringbrothers, Kyle Tucker from Detroit Speed; Bobby Alloway of Alloway’s Hot Rod Shop and Brian Brennan from In the Garage Media.

Moderated by Rick Love from Vintage Air, the panel discussion kicked off with a look at the impact of COVID-19 on the hobby.

While the absence of a physical SEMA Show this year has made for a very different experience, Bobby Alloway said that with the lack of an actual physical deadline, projects that would have been earmarked for SEMA in many cases weren’t completed. For Kyle Tucker and his team, a 1965 Buick Riviera they were working on for a customer and which was also planned for display at SEMA this year, was impacted early in the year but is now back on track and edging toward completion.

For Jim and Mike Ring, whose creations have achieved many awards at SEMA and rank as some of the most significant and popular custom builds of all time, the lack of a physical show has allowed the pressing of the reset button, meaning that shop has had an opportunity to get caught up and next year, Ringbrothers could well debut four vehicles at the SEMA Show, instead of just two.

There was a feeling that while the lack of a physical SEMA has provided some breathing room, the camaraderie and social aspect of the show is sorely missed.

“I can honestly say, while none of us miss airports, airplanes and hotels, we miss seeing our friends out,” said Rick Love.

With builders staying on their home turf this year and social interactions fairly minimized for most, there has been considerable interest in both customers and members of the public wanting to drop by to view the cars being constructed by these legendary individuals. While there was consensus that taking time away from a build to chat with a customer may seem like time wasted, Bobby Alloway said that it is part and parcel of operating a business like this.

“You spend time with them as you should,” said Alloway. “They do not have to spend money with us, as we are supplying them with something they do not need to have.”

One thing about the COVID-19 pandemic has been the disruption it has caused for the entire aftermarket supply chain, from raw materials, to manufacturers, part supplies and ultimately hot rod builds.

Rick Love said that from Vintage Air’s standpoint as a manufacturer, the pandemic has caused major disruptions in getting the supply of raw materials, creating significantly longer lead times.

On the fabricating and building side, Kyle Tucker said that for Detroit Speed, having a strategy where the business was able to acquire as much as it could in the way of raw materials as it could, helped weather the impact of the pandemic but noted that getting parts in to complete the builds proved a challenge, especially when the shop is working on 9-10 vehicles at any given time.

Jim Ring said that often, it is the smallest part that has the biggest disruption on completing a car.

Besides COVID-19, another big trends the Hot Rod building community is facing are evolving skill sets and the need to attract and retain talent.

Mike Ring said that for Ringbrothers, despite being located in a fairly remote location, Spring Green, Wisconsin, (population 1600), finding people that are tech-savvy and are able to understand the more technical aspects of some modern hot rod builds is not a problem, but finding talented fabricators and those able to work with their hands is a much bigger issue.

Ring also said because technology is changing so rapidly it can be hard to keep up at times, but ultimately the big challenge is still a shortage of good fabricators in the industry.

Rick Love acknowledged that if anything, the COVID-19 pandemic has brought into sharp focus the need for skilled tradespeople. “We’ve found that those who have a skilled trade and use their hands have plenty of work—they are essential people.”

Love said he was also encouraged by TV host Mike Rowe kicking off SEMA360, especially considering that Rowe has long been an avid supporter of skilled trades.

Jim and Mike Ring also discussed the efforts they have been doing in working with industry suppliers and tech schools to promote the opportunities available through high schools and technical colleges. “Talking to some of these tech schools, they only have 2-3 people in the class—that is unbelievable,” said Jim Ring.

The overall consensus among the panel was that there is nowhere near enough promoting of skilled trades currently happening at the high school level and that’s a great shame as there are so many great paying career opportunities available in the automotive aftermarket and hot rod/restoration/fabrication sectors.

In terms of technology related to the types of cars builders create, there’s been a growing trend toward using classic design, integrated with modern powertrains, chassis, suspension and electronics.

Kyle Tucker referred to a build Detroit Speed is currently working on which combines the classic looks of a 1966 Toyota FJ Land Cruiser with a modern Lexus powertrain and running gear. Tucker said such products can be challenging—ensuring everything is integrated properly—but also rewarding.

Brian Brennan, discussed the trend toward electrification of automobile powertrains and the impact of that on the Hot Rod sector with initiatives such as GM’s eCrate program and things such as the all-electric Mercury built by ICON a few years ago.

“I love my V8s,” said Brennan, “but I do see a time when it will be a little tougher to deal with this stuff,” hinting that electric powertrains may have a future in vintage iron and custom builds.

In terms of getting parts, the builders said that COVID-19 has caused disruptions not only in supplies but also the frequency and cost of getting them, with many shippers no longer guaranteeing overnight shipments and if a shop wants something quickly, needing to pay a premium for it.

Timesheets and billing are another area that often represent challenges for many hot rod shops, especially considering the number of labour hours that often goes into a custom car build.

Ultimately, fairness for both employees and customers; being transparent with billing and accurately tracking consumables is key. Bobby Alloway noted that a strategy in billing different customers at different times help ensure that money is regularly coming into the shop, but also cautioned it’s important to consider the actual project itself, not just the hours you’re billing for it. “The paint and bodywork are the hardest part and take the most time. Do not rush it, because you will have to go back and re-do it again.”

Regarding the best advice each of the panellists received over the years, some nuggets included believe in yourself and what you are doing, treat others as you want to be treated and ultimately have a passion and drive to get things done. “Have the grit and determination to make it happen,” said Kyle Tucker, “that is what will get you through.”