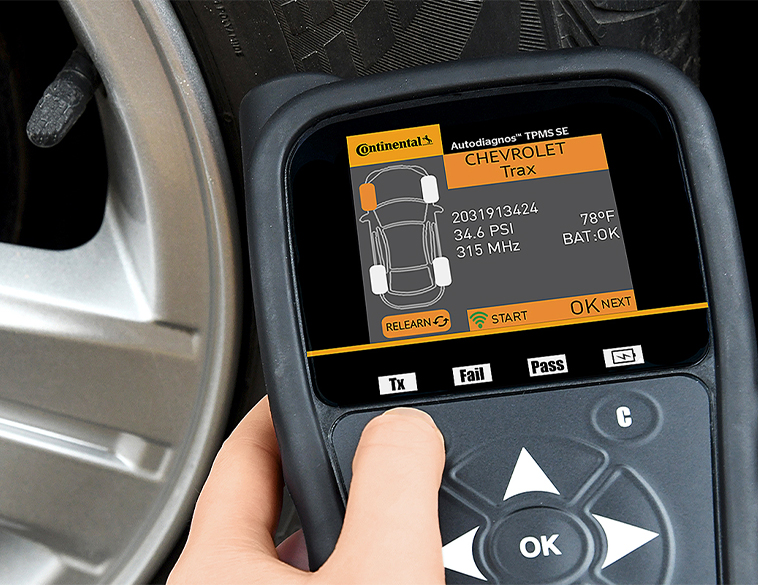 Training and installer awareness are key.

The first step to working with a Tire Pressure Monitoring System (TPMS) is making sure the vehicle actually has TPMS.

Since TPMS is not mandatory on Canadian vehicles, some may have the systems but they are not activated.

“There are some vehicle manufacturers that will not implement TPMS right out of the plant,” says Yanick Leduc, global technical training manager, Sensata Technologies. “If you bought the vehicle in Canada, the TPMS might be de-activated.”

The diagnostic aspect of TPMS is a bit of a learning curve.

Leduc explains that since TPMS systems work through wireless transmission, it adds a level of complexity when troubleshooting and diagnosing.

“Is it the sensor that’s defective?” he asks. “Or the computer? Is there something blocking the signal?”

In some cases, where a driver had tinted their windows very dark, it blocked the signal.

There are shops that are leery of working on TPMS, and may not want to service the valve.

Some vehicles may be on their second or third set of tires but still have their original valves.

“A rubber stem is not made to outlive a set of tires,” says Leduc. “If you change your tire, you need to change the valve stem at each time.”

A sensor can last five, seven, even ten years. However, the valve stem requires service every time an old tire is removed. Shops may be avoiding this service because they don’t have the right component, the right service kit, or simply lack the knowledge and skills.

But it’s a straightforward procedure, according to Leduc. “With a rubber stem, it’s just one screw to take out,” he says.

A shop that is fairly new to repairing TPMS may not have a programming tool, which is required for programmable sensors that come blank.

“If the guy at the parts store didn’t explain that to the shop, and the tech tries to install a blank sensor, it’s not going to transmit any data,” says Leduc. “There’s still some training and installer awareness required.”

“If the parts house sends a shop brand X sensor, it may not work with their TPMS tool because their tool doesn’t communicate with that sensor,” says Sean Lannoo, Technical Training Supervisor, Continental Automotive Systems, Inc.

The parts vendor needs to ask what tool their shop customer has first.

Use VIN for model year

In order to be sure to get the correct sensor, the most important information a tech need is the make, model and year of the vehicle.

“Many people look at the build date, but you can have model years roll overbuild dates,” says Lannoo.

“If a shop doesn’t have a scan tool that’s able to read the VIN, with North American vehicles you just look at the 10th digit of the VIN, which indicates the model year.”

Shops also need to keep their TPMS tools updated. Lannoo’s team visits about 2,000 shops per year, and three out of four often don’t have an updated TPMS tool and therefore cannot properly relearn the sensors.

“The problem isn’t that the vehicle isn’t cooperating, it’s because their equipment isn’t updated,” he says.

Occasionally, a relearn may go haywire because the old sensor is too close to the vehicle.

“In the past year, there have been incidents where the tech put the old sensor in his pocket, went to perform the relearn, and couldn’t get the relearn to go through because the tool was picking up the old sensor—which still had enough battery life to transmit,” says Smith.

Relearns may be a challenge

A shop may ask if a customer wants the old part returned, and the old sensor winds up in a plastic bag or cardboard box on the back seat.

When a technician is trying to do a relearn, they’ll trigger the sensor that’s in close proximity.

“We can’t see a frequency or radio waves, and that’s how these tools communicate with the sensors,” says Lannoo. This issue is common in dealerships, where various vehicles share the same protocol.

Some relearns can be a challenge too, because there is no standard procedure for manufacturers.

“Some are very easy, you pair the sensor with the vehicle, and then you drive the car for 15 minutes and you’re good,” says Leduc.

“You need to press your door switch for five seconds and then release it, press on the brake, drop the pressure on each of the tires to three psi, then reinflate the tire.”

It’s a measure that’s meant to bring consumers back to the dealer, but unfortunately, also discourages techs from working with TPMS.

“There’s real added value in servicing TPMS, it can bring in more money, even if it takes time to learn the procedures properly.”