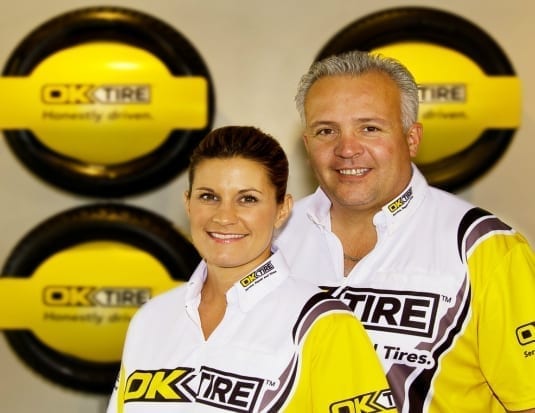 This former hotel manager (and his wife) now owns the National Store of the Year.

When OK Tire named its National Store of the Year for 2016, it was the culmination of eighteen years of hard work for Colin Fraser of OK Tire and Auto Service in Prince Albert, Saskatchewan. It was also a testament to the business skills of a man who knew virtually nothing about tires when he started.

“I was managing hotels, but I came up with a generic plan for any business that wasn’t doing well,” says Fraser, who owns and operates the store with his wife Lisa. “I didn’t have a whole lot of money, and was looking for something I could turn around.”

He found an OK Tire shop that its owners were shutting down. Fraser told them he’d work for six months for free, and if he could rescue the store, he’d buy it.

He didn’t just save it but grew it, moving three times into successively larger locations. The first two were retail and light-duty mechanical, but on the third he added commercial, agricultural, OTR, and full mechanical. His business quadrupled in 2009 and has been growing ever since.

“Everyone asked how I went from hotels to tires,” he says. “I used to change beds and now I change tires, but it’s the same thing, based on customer service. I didn’t clean the rooms or cook the food. I hired people to do these jobs. Do what you do best and let everyone do the rest.

“I used to change beds and now I change tires, but it’s the same thing, based on customer service.”

“There are four things to create and maintain success, which are customer service, our staff, technology, and the organization we belong to. OK Tire set out a path for all of us to become successful.”

Keeping up with technology

In addition to hiring the right people, including a manager who built the commercial business after the third move, Fraser pins much of his success on keeping up with the technology that his customers want to use.

“The entire digital landscape has changed,” he says. “The initial contact with customers is rarely over the phone. It’s either by text or social media, and if you don’t communicate on their terms, they won’t communicate with you. I don’t like texting, but that’s how we have to reach out to our customers.”

He has a texting program within the shop that’s on all phones and desktops. When a customer reaches out, including through a texting link on the store’s website, it pops up as a bubble on the screens.

An early riser, Fraser goes to his phone first thing, and will often prepare a dozen quotes while sitting with his morning coffee. “Managing the new consumer landscape is tough,” he says. “If you’re afraid of technology, hire someone to do it. It’s the new way to do business, and if you can’t embrace that, it will be difficult to survive.”

Fraser also makes sure his employees are well-versed in customer service. “Managing customer stress is critical, and I’ve spent time training staff on key points to bring the customer down, answer the questions, provide a solution, and let them make a choice,” he says.

“It’s your responsibility as a good shop owner to give them the news, whether it’s good, bad or indifferent, and let them make the decision. When you have all the right tools in the toolbox, you can open the shop and go to work.”