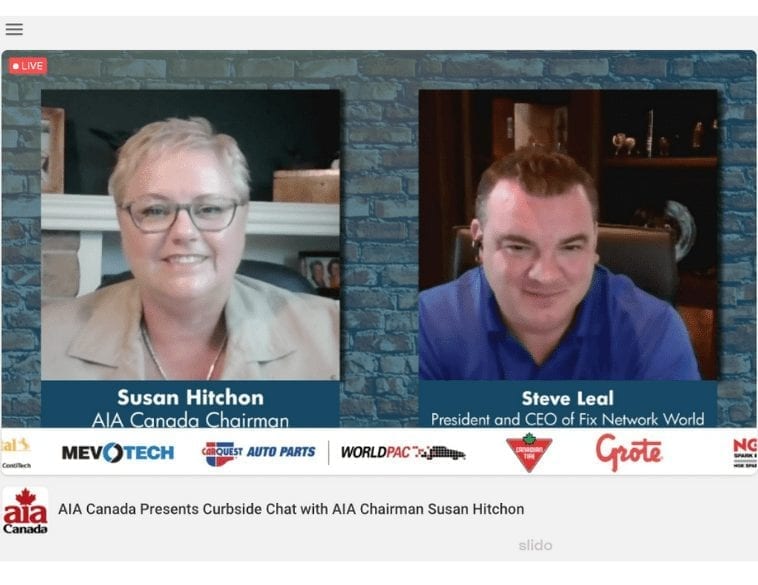 In 2020, AIA Canada launched its Curbside Chat, a video podcast series that is designed to provide automotive aftermarket industry professionals a platform and forum to discuss key issues impacting the industry, as well as interviewing leaders making a difference within the sector.

Having started as a Fix Auto franchisee more than 15 years ago, Steve Leal has lead the transformation of Fix Auto into the globally reaching Fix Network, one of the largest franchise players not only in the collision segment, but the entire automotive aftermarket, including mechanical (through Fix’s acquisition of Speedy Auto Service) and glass repair (NOVUS Glass).

A big question on the minds of many in the automotive aftermarket continues to be regulation and certification for repair shops, both on the collision and mechanical side.

Before diving into the interview, Susan Hitchon noted, “Last fall, we reviewed our 2019 membership survey and there was a fair indication that our membership was interested in getting involved with various parties in our industry and throughout Canada to either regulate or certify automotive repair shops.”

Steve Leal noted that while the conversation around regulation and certification (particularly on the collision side) has been a topic of discussion for years, today, there is an opportunity like never before to raise the bar for industry repair standards and engage all stakeholders, as well as getting government buy in for such programs by leveraging resources like AIA Canada to achieve these objectives.

Leal said that particularly on the collision side; having the industry work with AIA provides a better opportunity to move forward with a certification/repair standard because not only does AIA administer I-CAR collision repair training in Canada, but dialogue with other key stakeholders such as insurers and even vehicle OEMs will help result in a certification and repair standard that is both practical and fair.

One province at a time

Because insurance varies from province to province across the country, such an approach requires focusing on a single province at a time, with Ontario being a logical starting point due to its size and population base.

Leal said he feels that in Ontario, the focus of so-called “chaser”shops in the mainstream media, has caused a number of issues for the industry.

Firstly, that these fly-by-night operators negatively impact the entire collision repair industry, since they don’t follow proper guidelines to fix vehicles back to original OEM standards (potentially putting the motoring public in danger as well as the industry’s overall reputation) and secondly, because they are often at the centre of fraudulent insurance claims, cause added aggravation and expense for insurers, which is then passed onto consumers in the form of higher premiums.

Leal notes that by having a framework in place, such as the provincial government does for inspecting quality and hygiene in restaurants, the result would be a win-win for the entire collision repair sector as well as the consumer.

Susan Hitchon asked whether such a strategy on the collision side, could also be effectively applied to service repair facilities in the mechanical segment of the aftermarket, especially important considering that underperformed vehicle maintenance remains a going concern.

Given the efforts already undertaken by AIA, including lobbying at the government level to spread awareness about the importance the automotive aftermarket plays in the national and regional economies, Leal believes it makes sense to work with the association to create a repair standard that is governed by the industry and administered by a non-profit third-party. He likens the concept to what currently exists for other skilled trades, such as the Domestic Appliance (DA) standards for electricians.

Leal notes that while the COVID-19 pandemic has delayed progress of pushing forward with an industry-wide repair standard, the amount of progress made over the last 24 months has been significant.

“I definitely think by the fourth quarter [of 2020] we will see things gear up again. We are looking forward to having something similar to the DA model with the government that could be implemented in 2021. I don’t think we are as far away now with a new regulated model as we were 2-3 years ago. I definitely think that by 2021 we have the chance to come up with a new shop certification standard in Ontario.”