19 February 2020
Sukanya Ray Ghosh
Autosphere » Mechanical » CIAS 2020: Looking Ahead
The 2020 Canadian International AutoShow showcases the types of vehicles and technologies that aftermarket service providers will likely see in their service bays in the next few years. (Photos: Sukanya Ray Ghosh)
BMW Vision M NEXT - provides a glimpse into what high-performance sports cars could evolve into. This electric powered concept blends both past and future.
Infiniti Qs Concept was first seen at the Shanghai Auto Show, it features an electrified powertrain and likely previews both styling and technology of upcoming Q50 and Q70.
Hyundai’s IONIQ plug-in hybrid is one of a number of PHEVs you can expect to find in your service bays in the next few years.
Ivy has ambitious plans to build the largest EV charging network in Ontario. One of their chargers is pictured here with the Nissan LEAF plus, the latest version of the automaker’s pioneering BEV.
The latest Ram 1500 could be a game changer, via FCA’s eTorque mild-hybrid system, one of the most effective currently available.
Retro futuristic styling of Honda’s FCX Clarity PHEV stands out among a sea of generic looking modern vehicles. This plug-in hybrid is available across North America and is worthy of study for savvy aftermarket shops and technicians.
Honda’s Accord Hybrid is one of a number of increasingly green vehicles available to Canadian consumers.
All-new at this year’s CIAS was the 2021 Kia Seltos, the brand’s newest entry in the popular subcompact SUV segment.
New Land Rover Defender offers 21st century technology and amenities while maintaining a strong link to the past.
Game changing in every sense of the word—the 2020 mid-engine Chevrolet Corvette Stingray. I wonder how many technicians are itching to see what’s under the hatch of this one.
A big announcement at CIAS was Toyota’s made in Canada 2021 RAV-4 Prime Plug-in Hybrid. As PHEV’s go, this one could be a top seller.
Hydrogen is still seen as the long-term solution for alternative propulsion. The Toyota Mirai brings that technology to consumers today.
Another star of the show, Ford’s all-electric 2021 Mustang Mach-E is a clear Tesla competitor and redefines the concept of the family SUV.
The Hyundai 45 EV Concept car showcases the automaker’s vision for future automotive design that is focussed on electrification, autonomous technologies and intelligent design.
A second-generation 3.5-litre EcoBoost high-output truck engine from Ford Performance showcased at CIAS 2020. 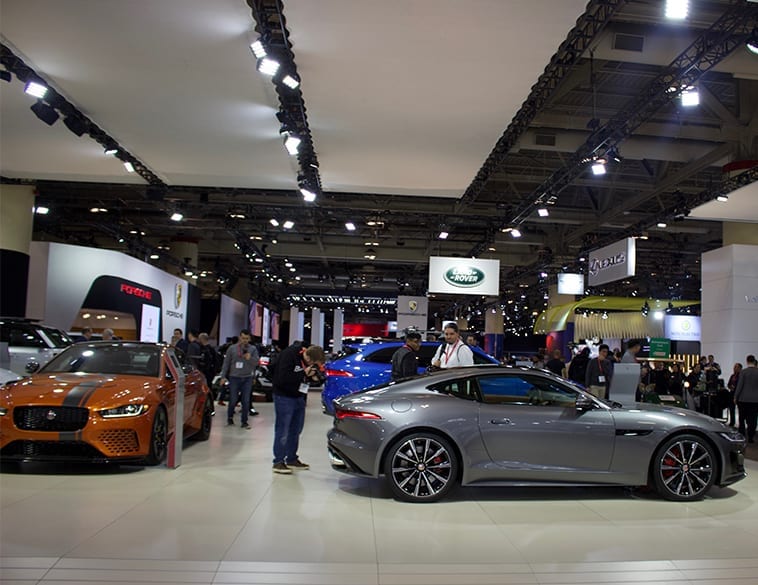 The 2020 edition Canadian International AutoShow (CIAS), currently underway at the Metro Toronto Convention Centre, Toronto Ontario, is the perfect platform for the automotive aftermarket industry to glimpse into their future.

Automakers strive hard every day to generate new ideas, refine technologies and introduce innovations to build the cars of the future. As vehicles are being built better every day, it is expected that they will last longer than their warranty periods and find their way into the service bays of the independent auto service providers in the near future.

A key theme noticeable at the CIAS this year is the abundance of the electric cars and plug-in hybrids showcased by all major auto manufacturers. “With each passing year, electric vehicle technology and infrastructure improves, and EVs are more prominent on Canadian roads than ever,” says Jason Campbell, General Manager of the AutoShow. “The EV Test Drive program at the AutoShow is a great opportunity to get a feel for driving the wave of the future.” This year’s show features more than 40 electric vehicles and plug-in hybrids.

As with every year, Plug’n Drive is present at the venue, providing opportunity to all vistors to experience EVs and PHEVs first-hand through test-drives.

“The number of EV models available for sale in Canada has grown from a handful to over 40 in only a few years,” said Cara Clairman, President and CEO of Plug’n Drive. “Every automaker in the world has an EV on the road right now, or is close to releasing one, and many have committed to electrifying their entire line-ups over the next five to 10 years. The future of the auto industry is looking increasingly electric and the AutoShow is the perfect place to see what’s here already and what’s coming soon.”

During the Opening Presentation by Toyota on the Media Day event of CIAS on February 13, Larry Hutchinson, President and CEO of Toyota Canada, offered Toyota’s perspective on the future of the automotive industry. “This is a period of intense change that the automobile manufacturers are more than capable of navigating. That’s why I’m a big fan of the theme of this year’s AutoShow—Transformative Times. In my over 30 years at Toyota, I can’t remember a more transformative time for our industry than right now. We are witnessing a revolution in safety, automation, and connectivity. But the biggest transformation is what we are putting under the hood of our cars and trucks—an electrified option. As an industry, we’ve come a long way with our internal combustion technology and hybrid technology. At Toyota alone, in the last 10 years, we’ve reduced greenhouse gas emissions in our car and truck fleet by almost 20 percent,” he said.

Commenting on vehicle electrification, he further added, “Today virtually every manufacturer has electrified vehicles to offer. Some automakers are focussed on battery electric technology, others are focussed on hybrids, plug-in hybrids and fuel cell vehicles. At Toyota, we believe in all these options; we think that it is important to explore and expand on each of these different options. In 2015, Toyota introduced the Toyota Environmental Challenge 2050. One of its goals is to reduce overall carbon emissions by 90 percent for vehicle models. This means electrifying our line-up. We believe that hydrogen fuel cell technology will be a big part of the long-term solution for this. In fact, we are already selling the hydrogen-powered Toyota Mirai in Quebec and British Columbia. And we recently unveiled a second generation Mirai. We also believe that battery-electrics will have a big role to play in zero emissions future. And Toyota is committed to bringing 10 battery electric vehicles to our global lineup by the mid 2020s.”

Besides electric cars, concept cars on the show floors showcase the futuristic visions of the automakers. Hyundai 45 Concept, BMW Vision M Next, Toyota GR Supra Track Concept, INFINITI QS Inspiration and the Lexus LF-30 Electrified Concept are a few examples of these vehicles.

CarCare Business attended the CIAS 2020 event to look at the technological highlights that might be of interest to the automotive aftermarket industry.