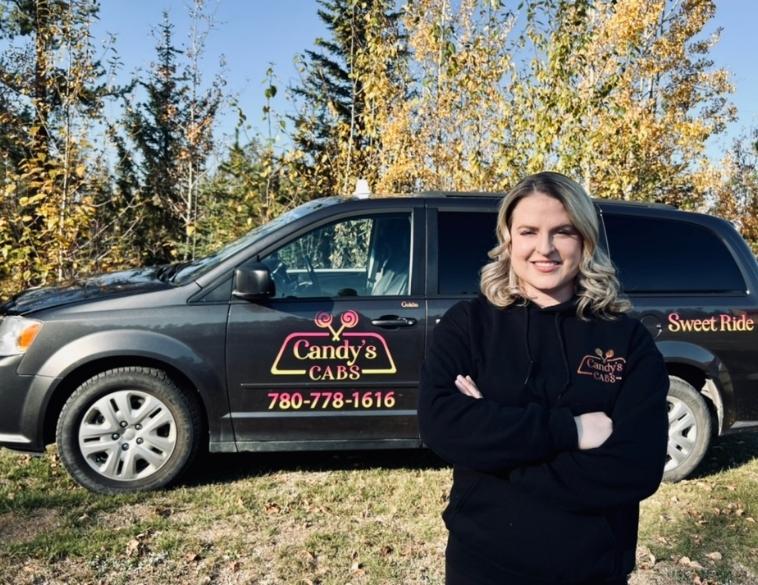 Within her first week of business, Candace Kucharchuk had already booked four special events for her taxis.

“I was booked for two weddings, a funeral shuttle and a birthday shuttle,” the owner of Candy’s Cabs recalls. “It’s just been crazy, I wasn’t expecting this response.”

So far, the start-up fleet consists of two Grand Caravans, a Chevy Avalanche, and a backup vehicle. The Avalanche does mostly hot shots, even out to oil fields if people need parts, or pickups from as far afield as Edmonton, which is about a two-hour drive away.

Kucharchuk was a bartender at the town’s Crown and Anchor bar and saw first-hand how long her patrons had to wait for cabs. She felt it was time to provide timely, safe and reliable cab service in Whitecourt, and got down to business.

First, Kucharchuk had to buy the right vehicles, and get licensing from the Alberta Gaming, Liquor and Cannabis for the liquor deliveries. Then she set about getting commercial insurance, which took a while because there is only one company in Alberta that will insure cabs.

And although she was told it would be a problem getting enough Class-4 drivers, Kucharchuk easily recruited eight drivers. In fact, she’s had people reaching out to her asking for jobs. “I already have four other people that want to work for me.”

The response to her services has been overwhelmingly positive. “People see how safe and reliable my vehicles are, and that I’m changing the taxi game in my town,” Kucharchuk comments. “I’m trying to be the best that I can. People see that.”

As a special perk, every passenger gets a candy with their ride. Candy’s Cabs are done up in black and vivid pink and yellow lettering, with matching pink dome lights on top. It’s not hard to see why the eye-catching fleet is in demand.

Right now, the most popular service is providing taxi services, but food and liquor delivery has also been very busy. “We drive quite a few vehicles home for our designated driver service, so it’s nice to see that people aren’t drinking and driving,” Kucharchuk observes.

Her only competition are a few other local taxi services, since the town doesn’t qualify for Uber or Lyft.

Kucharchuk started off a few months ago, doing research, doing to other towns, taking rides in taxis and experiencing everything herself. She also talked to friends who drive taxis in other cities and quizzed them about their work.

Community Futures Alberta, a community-based organization which provides support to entrepreneurs, helped Kucharchuk with further resources and business advice. She secured a business loan, as well as receiving valuable guidance to ensure her start-up would meet with ongoing success.

Her parents, who have a trucking company, were also a huge help, offering advice from their own experience in the industry.

Kucharchuk feels that much of her success is due to her laser focus on customer service. “We’ve had lots of good feedback about people feeling safe in our vehicles, and our drivers are courteous,” she says. “It’s good to see.” Her drivers help people get into the vehicles, help load groceries, and even bring their groceries to the door.

She spends most of her waking hours on her business, and occasionally takes a turn behind the wheel herself. All her vehicles have cameras in them which monitor speed and location, for safety reasons.

Eventually, Kucharchuk would like to branch out into neighbouring communities, where Candy’s Cabs can help people get to their destination, as well as making deliveries. She’s even working on an app that will make it easier to set up rides.

Right now, Kucharchuk is building a website as well as an online presence, with a Facebook page.

But she’s keeping it humble, and has named her vans after her two dogs, Louie and Goldie. “It’s been a learning experience. I’m glad I started in the slower season because in the winter it will be really busy. Every day we learn from things and I know we’ll just keep getting better.”