TalkAUTO 2022 Returns With a Bang 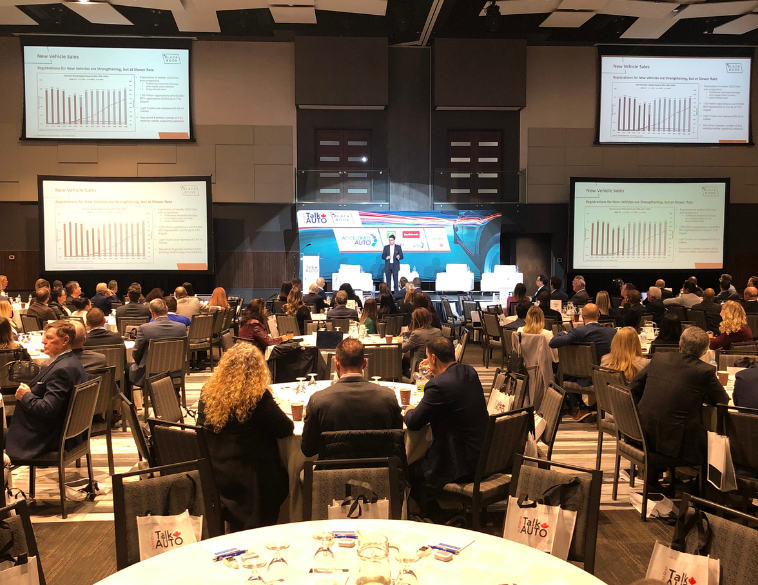 The return of TalkAUTO (hosted by Canadian Black Book), as a physical event at the Universal Event Space in Vaughn, Ont., was highly anticipated this year, and on November 10, it didn’t disappoint.

From hiring practices and inclusivity in the workplace, to projections on EV sales and the future of the industry, there were some real nuggets of information.

Biswah set the stage for an action-packed day, dubbed ‘An Industry in Transition,’ emphasizing the need for greater diversity and inclusion in the automotive sector. “We have to create a culture that’s inclusive to everyone in our industry,” Biswah stated, “that’s the only way we will attract talent.”

She was followed on stage by Daniel Ross, Senior Analyst and Head of Canadian Vehicle Valuations. Ross provided a Canadian automotive market update, noting that ongoing supply constraints, including semiconductor chips, plus other factors, such as rising interest rates and softening economy will continue to impact new vehicle demand for the foreseeable future. “New vehicle registrations are strengthening, but they are strengthening at a much slower rate than we anticipated,” explained Ross.

He noted that in relation to the hot topic of the industry at the moment—battery electric vehicles—demand continues to increase in Canada, with BEVs representing 5.2% of new vehicle registrations through August this year. Ross said that in terms of growth in the overall EV space, the future is likely to focus on battery electrics, since there is already significant saturation in the hybrid and plug-in market. A key driver in future demand for BEVs will be providing more options in the vehicle segments that consumers have clearly expressed preference for, namely pickup trucks and SUVs. Ultimately, sustainable success in the EV space will come down to adequate charging infrastructure and the successful deployment of 800-volt vehicle architectures.

Overall, new vehicle demand is expected to remain well below traditional inventory levels through 2028 and that’s continuing to put pressure on used vehicles. “On the used side, we’ve actually seen a 37% increase in overall volume, but where it stems from isn’t such a positive outlook.” In other words, this increase is being largely driven by a declining economy and rising interest rates.

As used car volume increases, it has also impacted residual values, which overall have started declining, though Ross noted that “small cars are reaping the benefits of retention right now,” indicating a significant shift in the market where trucks and SUVs have traditionally dominated, driven by higher fuel costs, inflation, rising interest rates and weakening consumer confidence.

Jeff Schuster, President, Global Forecasting, at LMC Automotive, was particularly bullish on EV growth projections. He predicted that globally, based on current data projections, EVs could count for 50% of global new vehicle sales by 2030, but that the product mix will likely change significantly, with more players, including traditional OEMs challenging Tesla’s current dominance in the segment. The big surges in EV demand are expected to come from Asia and Europe, though Schuster noted that around 5 million new EVs are expected to be sold annually in North America by 2030.

That being said, there are still some headwinds on the horizon, Schuster noting that rising interest rates will continue to impact consumer spending over the next few years, which in turn will impact overall new vehicle sales. Schuster projected that demand will slowly begin to rise, with new vehicle sales in Canada expected to reach almost 1.7 million units annually by 2024, up from 1.56 million today.

Brent Smith, Deputy General Manager, National Corporate Fleet Sales, Residual Management and CPO, from Nissan Canada, talked about the importance of Managing Residual Values, which impact the value of a brand’s vehicles in the marketplace. Higher residuals often translate into higher demand. From an OEM perspective, residuals determine the types of incentives that can be offered in the marketplace as well as lease price competitiveness against other brands and models.

Although current tight inventory means more lease returns are being retained by dealers for retail and not going into wholesale channels, the situation could change, which is why it’s important for dealers to be prepared, with the ability to accurately track residual values and creating a strategy where they can retail as many used vehicles as possible. This includes working with key stakeholders to establish solutions such as robust certified-pre-owned programs, which add perceived value for the customer, a higher gross margin for the dealer and a stronger brand reputation for the OEM.