ACE Conference Returns With a Bang for 2022 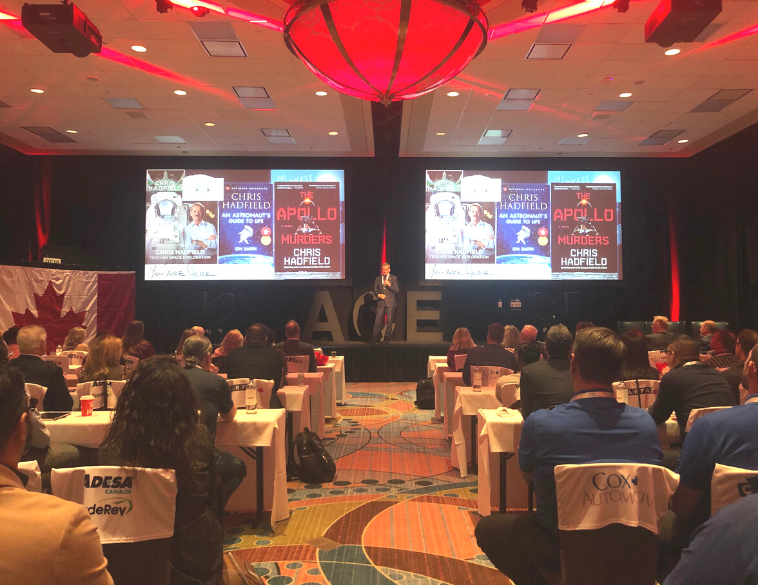 After a three-year hiatus due to COVID-19 lockdowns, the Automotive Conference & Expo (ACE) was back in full force for 2022 at the Fallsview Casino Resort and Conference Centre in Niagara Falls, Ont.

Hosted by the Trillium Automobile Dealers Association (TADA) and Consolidated Dealers, the event, which ran from October 19-20, featured a host of top-quality content and speakers, as well as an expansive tradeshow and multiple workshops, meetings and networking opportunities.

Three years is a long time, and during that period dealers have witnessed many changes. Acute inventory shortages coupled with a boost in vehicle demand, conspired to create a seller’s market where, dealers (where they could obtain vehicles), saw record profits on both the new and especially the used vehicle side.

Matthew Growden, Head of Auto Retail from Google in Canada, discussed the evolving digital consumer landscape in the Google’s Think Dealer Session. Growden discussed how, over the last seven years, there has been a perceived need to almost constantly update the experience as consumers grappled with changing technology. First it was an emphasis on mobile experiences, then it was about creating a seamless digital experience across multiple devices such as smart phones, tablets and computers. What’s interesting, noted Growden, is that growth in online searching for vehicle information increase rapidly, until it reached about 90% penetration. It has since hovered around the same level. In 2020, the onset of the COVID-19 pandemic and with it, government induced lockdown restrictions saw a flurry of activity in the market. With social distancing becoming the norm, many people who previously rode on public transit found themselves needing personal transportation. Coupled with the inability to physically interact like before, many dealers found themselves facing a tidal wave of digital and virtual car buying.

While we’ve seen a migration to more physical interaction between dealer and customer since then, Growden noted that there are a couple of key things that have changed since those pre-pandemic days. Firstly, consumers want transparent pricing and secondly, they want to spend as little time in the dealership as possible. That being said, the concept of a purely virtual automotive retail transaction is something most people don’t go for, since they still want to sample the vehicle and test-drive it before buying. Additionally, while the digital and virtual sales experience has notably improved and dealers have ever more sophisticated tools at their disposal, other obstacles as a result of the pandemic have emerged. A key one is a lack of inventory. Today, most customers simply can’t purchase a vehicle off the lot and even if they place a factory order it can take weeks, if not months to have the vehicle delivered, if it can be delivered at all.

This has caused a big impact on brand loyalty among OEMs and the dealers that represent them. Growden noted that brand loyalty continues to decline, while the number of switchers (consumers who aren’t brand loyal) continues to trend upward. He explained that this is a trend that’s likely to continue for the next few years, and the current push towards electric vehicles, is adding further complication. By 2025, Growden says that interest in EVs is likely to meet that of traditional vehicles, though the issue will continue to be whether consumers can actually purchase them or not. For dealers, this means that, more than ever, a need to focus on building and cementing relationships with their customers through multiple touch points; doing everything they can to cultivate loyalty by frequent and relevant engagement.

Another key issue facing many dealers today, is a shortage of qualified staff. In a special panel discussion entitled the War for Talent, which featured Todd Bourgon, Dan Deboer, Sarah Rawlinson and Rocco Rossi, moderated by Justin Poy; the emphasis was on looking for effective ways to find, hire and retain good staff. The problem itself has been a long time in the making. Rossi pointed out that Canada, along with many Western countries, has an aging population, with fewer working age people replacing those who are retiring. “In the 1960s we had four people working for every person that was retired,” he said. “By the 2030s we will have 2.5 people working for every retired person.” Not only that, but critical skilled trades programs and career development has been neglected for decades, resulting in a chronic shortage of technicians and other key staff. To try and mitigate the problem, dealers are teaming up with local colleges and education centres to groom the next generation of technicians, while associations like TADA are actively recruiting qualified service technicians from overseas to help their members fill positions. Not helping the situation are chronic backlogs in processing immigration documents and the lack of recognition in Canada of qualifications that those immigrating here have in their home country. Until these issues are addressed, the panel concurred, Canada and the automotive sector will continue to face severe skills shortages.

Tim Reuss, President of the Canadian Automobile Dealers Association (CADA) provided an insightful session in his Automotive Outlook address. Reuss discussed the current new vehicle sales numbers and with a recession expected in 2023, numbers that are already down significantly from pre-pandemic levels (1.5 million annually versus just over 1.9 million in 2019) could take a further dip next year, as consumers scale back purchases and if inventory shortages to continue to be a challenge for the industry.

Another headache for dealers has been the Trudeau Government’s luxury tax, which impacts vehicles over $100,000, though here, CADA has been partially successful, with 20% of the amount above $100,000 being subject to the tax, not the whole amount, as was initially proposed.

Speaking of government, the 2035 EV mandate is already proving a big challenge, since the feds, while declaring 100% of passenger vehicle sales must be electric by that point, have not been focused on providing adequate support for this initiative. So far; the amount of money being allocated to charging infrastructure falls far short, of what’s needed for an all-electric fleet. According to Reuss, around nine times the number of chargers are required to what the government has committed to (760,000, versus 84,500). Naturally this is of major concern to CADA. Reuss rounded off by discussing OEM/dealer relations, noting that the narrative needs to change. In other words, that OEMs need to view their dealers as assets and allies, not simply as an added cost to doing business—something that has gained traction in recent years due to the introduction of factory-direct retail models by some new entrants to the market. Reuss said the biggest issue for established OEMs comes not from dealers but from these new contenders. That’s why it’s imperative that associations at both the federal and provincial level, along with other bodies such as dealer councils, must work together to ensure a healthy and viable future for automotive retailing in this country.

A Future of Automotive Retail Panel, which included Shawn Vording, Ryan Robinson, Ian MacDonald, Mathew Growden; Tony Kourbridis and Todd Phillips, provided some interesting opinions and insight into trends shaping the industry and what the future might hold for dealers. EVs were a focal point of discussion, with some panelists believing they will be the next big thing while others believe that while growth in the segment will continue, EVs aren’t expected to be the only game in town. Regardless, a key point was that the transactional process needs to be simple and convenient for consumers, plus the fact that dealers need to really understand individual customer needs, not just approach a one-size fits all strategy when it comes to retailing.

Additionally [and certainly in the short and medium term], the delays in customers being able to acquire vehicles means that dealers need to ensure they are working at building relationships via frequent touch points and going above and beyond expectations. Once inventory levels stabilize, such an approach will likely put those dealers who’ve taken this approach, well ahead of their competitors.

Navigating through complexity and change

A major highlight of the 2022 ACE Conference & Expo was a keynote address by Chris Hatfield, Renowned Canadian Astronaut and spaceship commander. Entitled Preparing for the Unexpected: How to Manage Through Complexity and Change, it was truly inspiring session, Hatfield talked about Shifting Forward and taking advantage of technical change. “How does radical change happen?” Hatfield stated. “It happens because somebody in a leadership position is willing to make an audacious decision.” He referred to NASA’s space program in the 1960s to not just send men into orbit; but embark on an actual mission to the moon, and while President John F. Kennedy gave his famous speech in 1961 that declared we choose to send people to the moon, not because it is easy, but because it is hard,” the real effort in making it possible fell upon the shoulders of everyday people. Hatfield said it was this belief and focus on achieving something beyond what had ever been done before, that inspired him to pursue his career path in becoming an aviator and ultimately an astronaut, when Canada’s space program opened up in 1983. With multiple space missions under his belt (including the infamous STS-100 in 2001 aboard Space Shuttle Endeavour, where the Canadarm2 was installed on the International Space Station and Hatfield made the first spacewalk by a Canadian; as well as Expedition 35 to the International Space Station, where he became the first Canadian to command the ISS; Hatfield talked about life in space, the miracle that is spaceflight, including the Shuttle and today’s reusable rockets from the like of Space X and how, we all can, through instigating personal change, have the ability to transform our own lives and reach that next level of achievement, as well as gain a new perspective of ourselves and the world we inhabit.

Other highlights from ACE 2022, including multiple workshops for dealers, both in person and virtually, as well as a special Women Driven focused day two, that included an all-female panel discussion on Dismantling Barriers in the Workplace, as well as a keynote session on How to Succeed in the Evolving Innovation Economy from Janet Bannister, and another on Transformational Leadership from Celina Caesar-Charvannes.

Other highlights included a session on how to leverage the power of TikTok from Jeremy Riesler, which showed how big an impact automotive content is having on the platform, as well as a networking cocktail reception at the trade show, and live entertainment courtesy of famed Canadian rock artist Tom Cochrane and Red Rider at nearby Margaritaville.

All in all, it was a spectacular event and extremely well-received by the nearly 700 attendees and exhibitors, who thoroughly enjoyed the content, camaraderie, and spirit of ACE 2022.