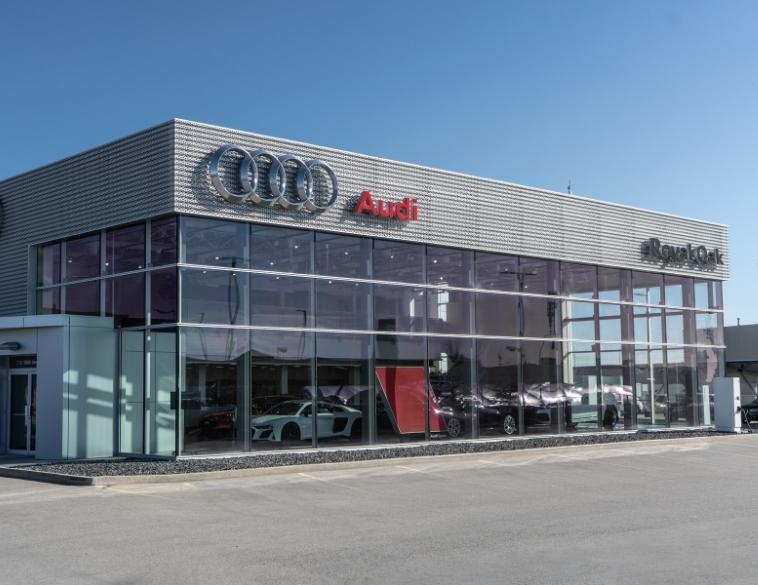 After a 2013 hailstorm cost Murray Dorren $3 million worth of damage, he decided to get tough.

“The average claim per car was about $25,000,” says Dorren, the owner of Audi Royal Oak in Calgary, Alberta. “It was terrible. I didn’t want to go through that again.”

Some dealerships in the area, known as “Hailstorm Alley,” have raised tents or protective shields over their inventory to shelter them from the hail, but Dorren wanted something more aesthetically pleasing.

In 2018, Dorren installed a network of carports, which provide safety from the elements, topped by solar panels to harness renewable energy. That made Audi Royal Oak eligible for an Alberta government incentive which provided a 25 percent subsidy.

The solar panels also help offset 267 tons of carbon annually, the equivalent of driving more than 950,000 kilometres by an average passenger vehicle.

Although the solar enhanced carports were a $1 million investment, Dorren saves substantially on hail insurance.

“I get about a third of the savings from the power I’m making, and two-thirds are from my insurance reductions,” he reports. “I’m hoping to see a payback in about 10 to 11 years.”

Since 2010, Alberta is responsible for 51 percent of all storm-related damage claims in Canada, according to an AMA insurance report. The same report cites 66 percent of all major hailstorms in Canada occur in Alberta.

Audi was very enthusiastic about the solar installations, as the manufacturer is actively embracing carbon neutrality.

“Audi is going hard after electric cars, so this fits into the whole plan,” notes Dorren.

EVs can run on solar power

Right now, he notes that the Audi e-tron, e-tron GT and Q4 EV are selling quite well. At Audi Royal Oak, thanks to the solar panels, their EVs can literally run on solar power!

The dealership also finished a full renovation and expansion a year ago, with a brand-new look and double the service capacity. “I added 17 bays to my shop, so I now have 27,” explains Dorren. “We’re building for the future.”

The front and exterior were changed, for a more contemporary look. “Our staff and customers are enjoying the new facility, it’s more comfortable and accommodating,” describes Dorren.

The renewable energy aspect carried through with the new design, with LED lighting everywhere.

Dorren also has a fast EV charger and will be adding more Stage Two chargers. The service area is equipped with chargers, for servicing EVs. Technicians are also receiving serious training on the EV side.

The dealership’s new look combines with the solar-powered carports for a progressive image, that’s in step with the future.

The luxury car market in Calgary is a hot one, and Audi Royal Oak’s biggest seller is the Q5 as well as the smaller Q3. “We just came out with the RS6 wagon,” notes Dorren. “North America’s been screaming for that car. We’re always sold out and could always use 10 more.”

He’s coping with inventory shortages and says there are some positives. “It increases desire and demand, plus you have no costs toward inventory,” says Dorren. “You can reduce some expense here and there. Some stores have had a pretty good year.”

Lack of inventory is creating pent-up demand. “Whoever can find the chips and make the cars is going to do well,” he quips.

Across the street, a new Jaguar Land Rover dealership has sprung up, and Dorren’s noticed they have carports as well.

“They didn’t do the solar option–yet. But I understand they have the infrastructure for the solar to be added in the future.”

“I think there will be solar panels everywhere at some point.”