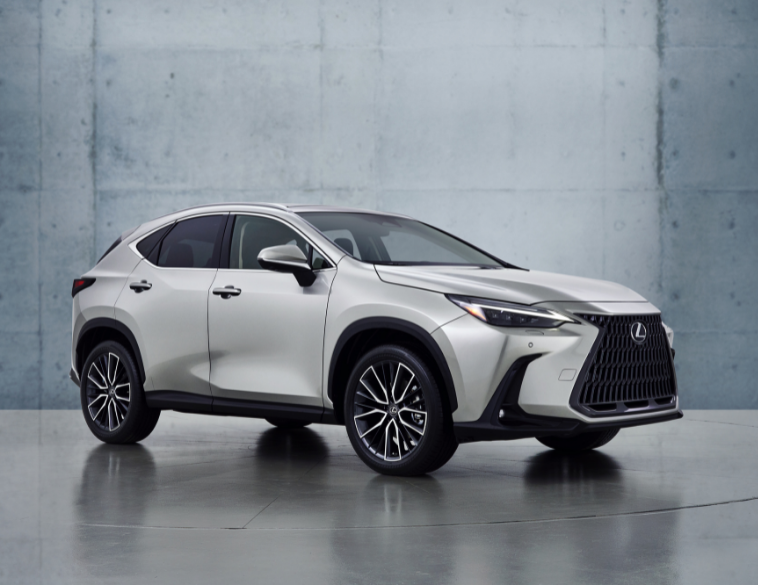 The all-new 2022 Lexus NX will start production in the fourth quarter of 2021.

“My award-winning team is excited about adding the NX to our [Cambridge, Ont. assembly plant] production line and we have been working tirelessly to prepare for this. We’re on schedule and look forward to building this amazing new NX series for our fellow Canadians,” said Frank Voss, President of Toyota Motor Manufacturing Canada.

Instead of transfer gears and a driveshaft to the rear wheels, the AWD system employs a second, independent electric motor to drive the rear wheels when it detects it is needed to help maintain optimal traction.

Using the maximum charging current of 240V, the Lexus NX plug-in hybrid can be fully charged in approximately two-and-a-half hours when equipped with the standard6.6 kW Expedited Onboard Charger.

Improvements were made to the torsional rigidity through laser peening welding and the addition of high rigidity foam.

The Lexus NX 250 model comes with AWD as standard.

The all-new NX will come equipped with the latest Lexus Safety System+ 3.0. for additional peace of mind in certain scenarios including:

The following will be added to the current Lexus Safety System + features for NX:

Safe Exit Assist alerts the driver and passengers to avoid the risk of accidental contact with vehicles and cyclists. The new, optional Digital Mirror provides a clear view of the obstacles behind the vehicle.

At the front, the updated grille pattern and frame create a more integrated feel to the body of the vehicle. Framed on top by the L-shaped daytime running lights (DRL), the optional three-projector headlamps create balance with a more subdued impression.

In the rear, the Lexus logo has been redesigned and has been replaced by a new, unified LEXUS logo located at the centre of the vehicle.

A full-width blade rear lamp (similar to the Lexus UX and IS) and L-Shaped combination lamps on the rear fenders are separated. The light bar lamps are constantly illuminated at night to function as taillight.

The 2022 NX delivers on the brand’s well-known interior cabin noise reduction with additional updates made to reduce road noise and exterior distractions.

Interior seat and console colours include:

Newly designed standard heated front seats and optional heated rear seats add comfort throughout the cabin. There is also increased head and legroom with the adoption of the Lexus GA-K platform. Additional storage space has been added in the rear cargo area.

In a first for the NX, the panoramic moonroof gives both the front and rear passengers the ability to see the sky with just the push of a button.

Some of the features include: