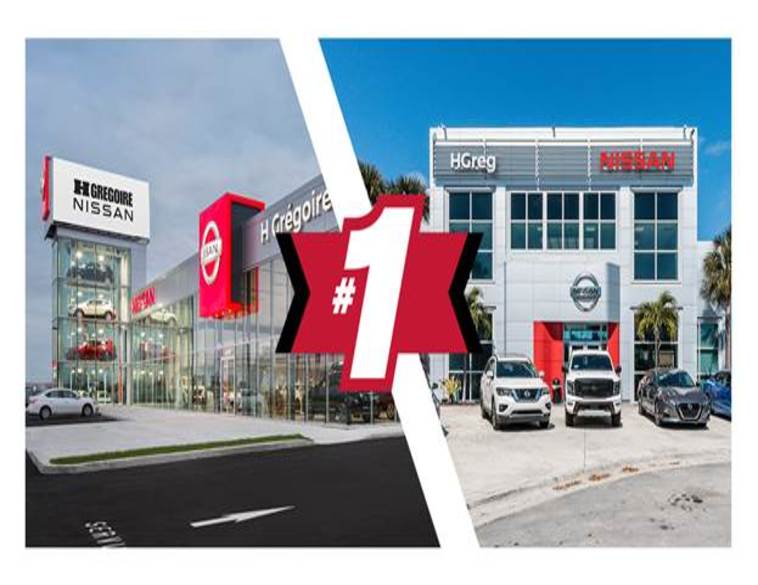 HGregoire Nissan Chomedey, located in Quebec, and HGreg Nissan Kendall, in Florida, have earned the #1 spot in their respective countries. Photo: HGreg

HGreg was awarded best-selling Nissan dealership in both the U.S. and Canadian markets.

HGregoire Nissan Chomedey, located in Quebec, and HGreg Nissan Kendall, in Florida, have earned the #1 spot in their respective countries among more than 1200 dealerships in the Nissan network in both countries.

“We’re celebrating but, more importantly, we’re remaining focused on the customers who choose to visit us online or in person today for their new needs and dreams,” said John Hairabedian, president and CEO of HGreg.

The Nissan dealership rankings are based on sales figures on a month-by-month basis. This recent recognition comes on the heels of several other industry achievements for both dealerships.

In January of this year, HGregoire Nissan Chomedey announced it was named Largest Retailer of Nissan vehicles in Quebec – the second consecutive year it had earned the title.

The dealership was also rewarded with the Best Priced Dealer Award for its commitment to transparency and fair pricing on autoTRADER.ca

HGreg Nissan Kendall, under HGreg ownership for slightly more than one year and already a J.D. Power 2020 Dealer of Excellence, earned the distinction as America’s number one Nissan dealership for the first time in its history.

“It’s evident that the company is determined to drive our industry into a promising future that starts with happy and returning customers,” said Audrey Rorsvort, Dealer Operations for the Eastern Region of Nissan.

The car group has also introduced new services and solutions including a contactless car-buying process, payment by cryptocurrency, 7-day money-back guarantee andexchanges and an omnichannel experience.