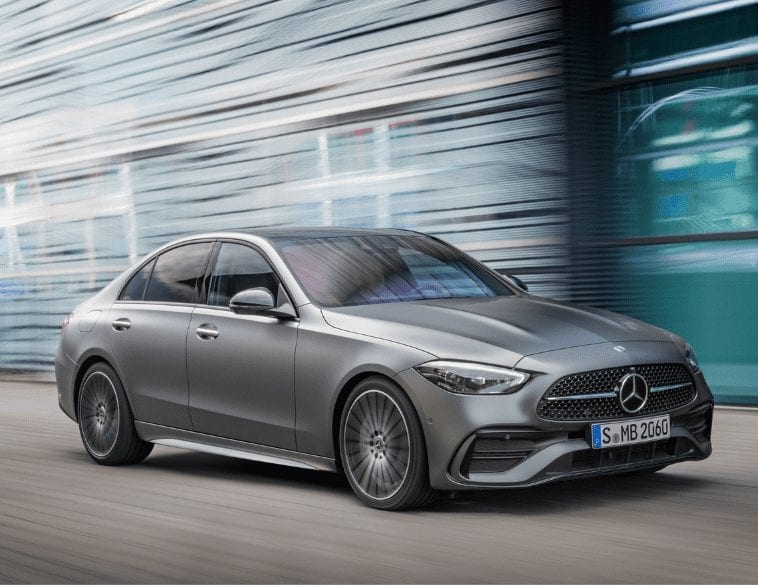 The new C-Class Sedan will arrive in Canadian dealer showrooms in the first quarter of 2022. Photo Mercedes-Benz

The new C-Class Sedan will arrive in Canadian dealer showrooms in the first quarter of 2022.

As a result of its systematic electrification and intelligent downsizing, the new C-Class sets new standards of efficiency.

The engine is a four-cylinder unit from the current modular FAME (Family of Modular Engines) Mercedes-Benz engine family.

In addition to turbocharging, the gasoline engine now has an integrated starter-generator (ISG) for intelligent assistance at low engine speeds as a mild hybrid of the second generation.
The ISG uses a 48-volt onboard electrical system that allows functions such as gliding, boosting or energy recovery, and makes significant fuel savings possible.

The four-cylinder M 254 petrol engine with a second-generation starter-generator creates an additional output of up to 20 hp and 147 lb-ft more torque for the new C-Class.

In the M 254, Mercedes-Benz has for the first time combined all the innovations of the modular engine family of four and six-cylinder units in a single-engine. They include NANOSLIDE® cylinder coating and CONICSHAPE® cylinder honing (trumpet honing).

A completely new feature is the segment charger with flow connection, an advancement of the twin-scroll technology for an even more instantaneous response of the forced induction system.

The 9G-TRONIC transmission was developed further for adapting the ISG and is installed in all C- Class models. The electric motor, power electronics, and transmission cooler are now housed in or near the transmission.

Besides, the efficiency of the transmission has been increased. Among other aspects, the optimized interplay with the electric auxiliary oil pump reduces the delivery rate of the mechanical pump by 30 %.

Furthermore, it uses a new generation of a fully integrated transmission control with a multi-core processor and new design and connectivity technology and the 4MATIC drive system has been advanced further for the new C-Class.

The new front-axle drive allows higher torque levels to be transferred with an ideal axle load distribution for driving dynamics.

Designers have reduced lines to a minimum to accentuate the ‘catwalk’ line or the main body line that stretches the entire length of the vehicle.

The brand’s hallmark radiator grille characterizes the front of the new C-Class.
All models feature a central star, with the design and character of the grille differing in the details. With Sport Package, the front of the vehicle is graced by a diamond grille paired with a star designed in chrome.

The rear of the vehicle features a design that is typical of a Mercedes-Benz sedan. For the very first time, the taillights of the sedan feature a two-piece design, with the light functions divided between the sidewall and trunk lid lights.

Much like the S-Class, the new C-Class features a dashboard that is divided into an upper and a lower section, which host new design elements such as the round aircraft engine nacelle-like air vents and an opulent expanse of trim.

The trim flows from the centre console to the dashboard without interruption. Both the dashboard and central display are tilted towards the driver by six degrees.

The door centre panel with integrated armrests morphs the vertical surface into a horizontal orientation.

Reflecting the design of the centre console, the front section takes the form of a metallic high-tech element. It can be used as a grab or closing handle and houses the power window controls. Another highlight is the floating control cluster, into which the door opener and seat adjustment controls are integrated.

The seats of the new C-Class feature a special design that uses layers and enveloping surfaces The head restraints are completely redesigned and are attached to the backrest with a sealed piece of trim under which the adjustment mechanism is located. A man-made leather dashboard is available for the C-Class when selected with Sport Package.

The look of the screens can be individualized with three display styles (Discreet, Sporty, Classic) and three modes (Navigation, Assistance, Service). The new C-Class is equipped with ambient lighting featuring optical fibres as standard.

Like the S-Class, the new C-Class is equipped with the second-generation Mercedes-Benz User Experience (MBUX). With the S-Class, Mercedes-Benz had developed a new display aesthetic, which is now used as the basis for other models.

Compared to the previous C-Class series, the latest generation of the Intelligent Drive Package has additional and advanced functions. Three examples that showcase the advancement of driving assistance systems are:

– On all types of roads – highways, country roads or in town – Active Distance Assist DISTRONIC can automatically maintain a pre-set distance from vehicles ahead. New to this feature is the ability to react to stationary vehicles on the road at driving speeds of up to 100 km/h, which was previously limited to 60 km/h.

– Active Steering Assist helps the driver to stay in the lane at speeds up to 210 km/h. New features include additional lane recognition with the 360° camera, significantly improved availability and performance in bends on country roads and improved lane centring on highways.

– Traffic Sign Assist recognizes signs on overhead gantries and at roadworks. Even conditional instructions (e.g. “when wet”) are recognized by evaluation of all onboard sensors. New are the stop sign and red traffic light warning functions.

As a result of improved surround sensors, the parking systems give the driver even better support when manoeuvring at low speed. Operation is faster and more intuitive as a result of better integration into MBUX. Emergency braking functions also serve to protect other road users.

The safety concept of the C-Class is based on a designed body shell with a rigid passenger cell and crash structures that deform in a specific way, which act together with seat belts and airbag systems.

In an accident, systems such as belt tensioners and airbags can be activated to protect the occupants as the situation demands.
With the help of numerous simulations, the vehicle structure was configured to ensure particularly good occupant protection in the event of a crash.