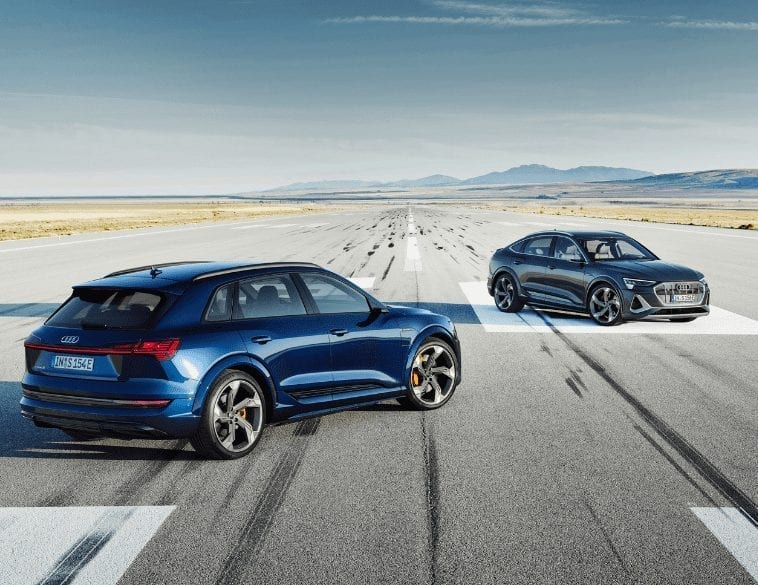 The two electrically powered S models will be launched on the European markets in fall 2020.

Both of the S models with fully electric drive use three electric motors, two of which operate on the rear axle. Their intelligent drive control vehicle safety, and dynamic handling. In addition to the electric all-wheel drive, the vehicles are equipped with electric torque vectoring with active and fully variable torque distribution on the rear axle.

The front electric motors from the e-tron 55 operates together with a structurally identical counterpart and individual modifications in the rear. The high-voltage battery has an energy capacity of 95 kWh, of which 91 percent (86 kWh) is usable. With one battery charge, the Audi e-tron S and the Audi e-tron S Sportback achieve ranges of up to 364 km (226.2 mi) and 370 km (229.9 mi) respectively in the WLTP cycle.

Only the rear electric motors are engaged as long as the Audi e-tron S2 and the e-tron S Sportback3 are operating in normal driving mode. The front electric motor flashes into action when the driver demands more performance, or predictively before traction subsides.

Each of the rear electric motors sends the drive torques directly to the respective wheel via a single-speed transmission; there is no more mechanical differential.

The suspension of the electric S models

The large high-voltage battery ensures a balanced distribution of the axle loads and is installed in a low position comparable to that of the three electric motors. This lowers the car’s center of gravity, which offers great advantages in terms of handling. The suspension has S-specific tuning. The Audi drive select system offers seven driving profiles. For example, it accesses the adaptive air suspension sport – the air suspension with regulated damping can vary the level of the body by up to 76 millimeters (3.0 in) depending on the driving situation and settings.

The brake is actuated and regulated via a compact module that controls the pressure build-up electronically (by wire), reinforces it electrically, and actuates the brakes hydraulically. An electric spindle drive actuates the displacing piston in a flash: The brake pads are in full-pressure contact with the disks after just 150 milliseconds. Depending on the driving situation, the brake control system decides individually for each axle whether the car will decelerate with the electric motors, the wheel brakes, or a combination of both systems.

Electrically adjustable sport seats come as standard. Their leather/Alcantara upholstery as well as the gear selector lever feature S embossing with a rhombus. The decorative trims are made of brushed aluminum and are available in two versions. They are also available in carbon upon request.

The Audi e-tron S2 and the Audi e-tron S Sportback3 are equipped with the digital MMI touch response control system with the two large central displays. On the third display, the Audi virtual cockpit, the driver can select a special e-tron screen that moves the electric drive to center stage. The MMI navigation plus control and infotainment system is included as standard.