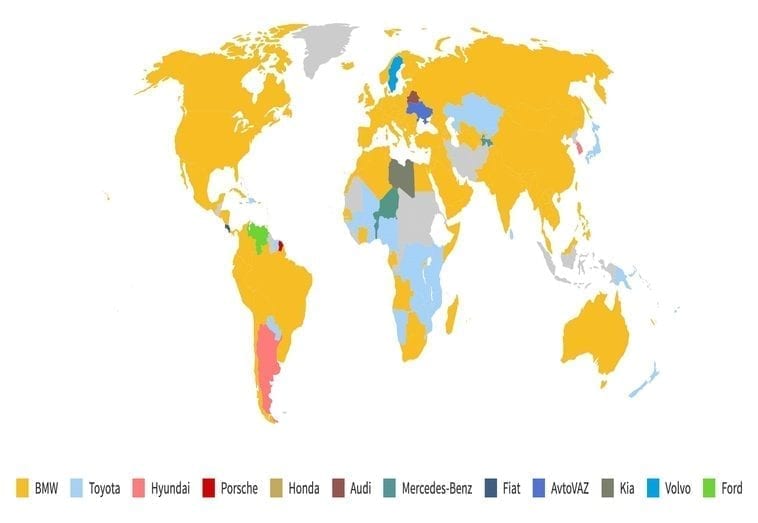 Followed by Toyota and Mercedes, BMW was the most searched car brand in the world for 2019.

Comparethemarket.com.au has created an interactive world map that indicates the most searched vehicle brands for 164 countries on Google across both 2018 and 2019, highlighting some of the most popular car brands around the world. So, what does the data show us?

Most searched car brands around the world

German manufacturer BMW was the most searched car brand in 2019, topping the list in 122 (nearly 75%) of the 164 countries included in the analysis. Some countries where this brand was top of the list include the United States, South Africa, India and Portugal.

Based on the analysis by comparethemarket.com.au, Toyota was the second most-likely brand to appear in a country’s top three searches (17.1%), followed by Mercedes-Benz (13.6%) and Audi (10.1%). Beyond these names, only a handful of brands made it into the top spot. South Korea saw Hyundai take first place, while lesser-known manufacturer AvtoVAZ was the most searched in Ukraine, and Porsche the most searched in French Guiana.

The data showed that some countries prefer locally manufactured brands. Sweden’s top spot was claimed by their own manufacturing company Volvo, and Japan also favoured their own local brand, Toyota.

To view the interactive map that displays the top searches in 2018 and 2019 including a closer look at the data, click here.