Heavy Truck Sales in Canada Amidst a Pandemic 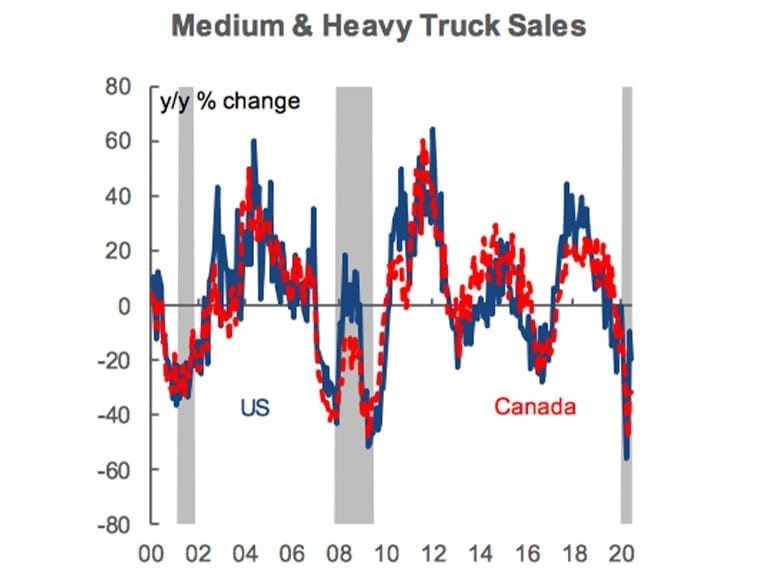 According to Scotiabank Economics, heavy and medium truck sales in Canada unsurprisingly plummeted at the onset of the pandemic as economic activity came to a halt.

This includes trucks weighing greater than 14,000 lbs—commonly identified as Class 4 through 8 under the American system—that are largely commercial-use vehicles. At the nadir of the decline, sales were down by -55% y/y in April, while year-to-date sales sit at -26% (end-July).

A highly cyclical business, this compares to—but not surpasses—past declines in recessionary periods. For example, sales were down by -33% y/y and -40% y/y in the US and Canada, respectively in 2009 at the peak of the Global Financial Crisis. During this period, monthly declines approached -50% (y/y) in both markets (chart 1).

A cyclical downturn was well-underway in the industry prior to the pandemic.

Heavy truck sales in Canada and the US surged in 2017 and early 2018 as output gaps closed against solid economic activity and highly supportive fiscal and monetary policy environments. Sales grew by 16% y/y and 26% y/y in 2017 and 2018, respectively.

As financial conditions started tightening in the latter part of 2018 and trade tensions escalated, truck orders pulled back sharply in a trend decline as the industry faced an oversupply in capacity. Sales were already in negative territory when the pandemic materialized in early 2020.

A stronger-than-anticipated economic rebound in Canada is supporting the nascent recovery in truck sales. Traditional economic indicators across the board are signalling a robust rebound in Canada. This is due in part to earlier-than- anticipated re-openings, pent-up demand working through the system, as well as exceptional policy supports. In fact, income replacement is estimated to have exceeded aggregate wage losses by about 20% during the pandemic. The nature of the crisis (i.e., government-induced shutdowns as opposed to economic vulnerabilities) is also likely spurring a stronger rebound than one would expect under typical economic cycles.

A hefty rebound in retail sales bodes particularly well for the heavy truck industry. In fact, June retail sales already surpassed pre-crisis volumes in Canada. A shift to online purchases could potentially fuel even stronger demand for commercial trucks. E-commerce as a share of total retail sales doubled during the pandemic (from less than 5% to about 10%). Excluding autos, gas, and food, this surge is even more notable—from less than 10% to almost a quarter of all retail sales in April. This can be expected to fall back as consumers are increasingly venturing out, but there will likely be a structural shift in shopping habits over the medium term.

Re-starts in industrial production are also buoying the rebound in freight demand. Manufacturing shipments were still shy of pre-pandemic levels in June (latest available data), but have been accelerating since April. Exports mimic this trend.

A continued strengthening in business sentiment should bode well for a recovery in supply, particularly for industries that are more readily able to adapt to physical distancing requirements.

Freight traffic is illustrating the rebound. Though stale, truck border crossings in Ontario were down around -10% in June relative to last year with the gap likely continuing to narrow. While public data on Canadian trucking activity is otherwise limited, rail activity offers a proxy for a resumption in commercial transportation of goods in Canada. Rail carloads in early August exceeded pre- pandemic levels, but are still down around -5% y/y. However, freight demand was already depressed in 2019 relative to the 2018 high. Price softness has translated into lower revenue ton miles, which sit about 15% below pre-pandemic levels.

These trends are broadly consistent with available US truck freight data. US truck utilization rates were approaching pre-pandemic levels through end-June, though again down relative to 2018 peaks. Prices (as measured by the Cass Price Index) dipped by more than 15 ppts just prior to the pandemic.

A variety of factors contributed to this price weakening, most notably an oversupply in capacity as year-prior orders were delivered into a softer market through 2019 and early 2020. While prices slipped further with the pandemic-induced shutdowns, the dip was relatively muted compared to the earlier correction.

Prospects For A Longer Term Recovery

Canada is facing a multi-year economic recovery despite optimistic signs of rebound. Scotiabank Economics’ forecasts anticipate pre-crisis GDP levels will be achieved only by 2022, with a real GDP contraction of -6.6% in 2020 followed by a 5.4% rebound in 2021.

There remain downside risks to this outlook including new outbreaks, along with a further escalation in trade tensions, and pending US elections this Fall.

The economic recovery should support freight demand and hence heavy truck sales over the medium term. Just as the downturns are dramatic in the trucking industry, the upticks can also be sharp. Sales rebounded by 22% y/y in 2010 following the GFC, surpassing pre-crisis sales levels by 2011. These accentuated cycles mirror fluctuations in business investment trends, not surprisingly, given the high capital costs of acquisitions.

A similar correlation exists with manufacturing new orders (and more generally other indicators signalling commercial activity. Scotiabank Economics estimates a contraction in business investment of around -7% this year followed by a rebound of around 11% in 2021, which is comparable—if not somewhat muted— relative to the GFC retrenchment in investment.

There will be other competing drivers and frictions to the heavy truck sales outlook. A durable shift to online purchasing habits could support a stronger recovery, but a supply overhang exists with utilization rates still depressed. Low fuel prices and cheaper financing costs should help operating costs, but a multi-year cyclical correction that started well-before the pandemic means margins were already under pressure as the crisis hit.

The order-delivery lag in heavy truck sales puts a premium on the medium-term outlook. Given high uncertainty in this regard, it is a particularly challenging environment to anticipate needs one year hence. On the other hand, a bulk of uncertainty falls within the next 6–12 months including virus resurgences, tariff risks, and US election uncertainty which could argue for looking through near-term potential for volatility.