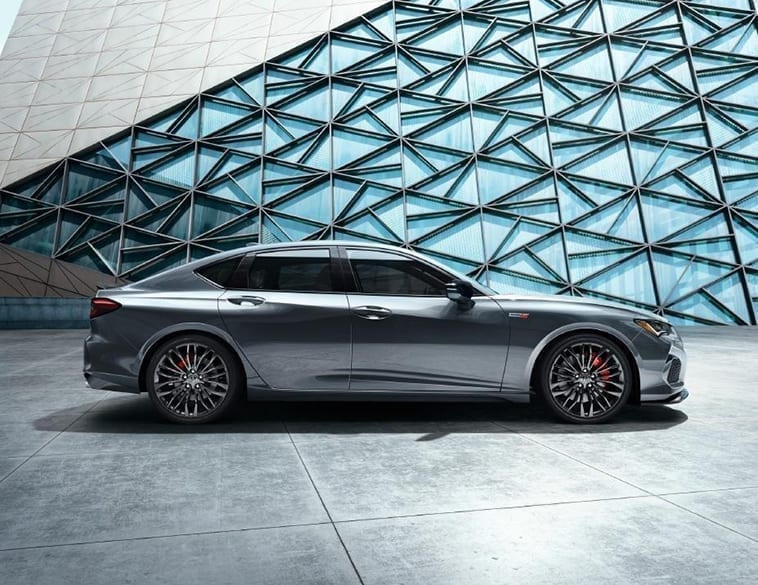 With a model exclusive body structure and chassis architecture, all turbo engine lineup, and an athletic stance with bold proportions, the new TLX delivers dramatic gains in both style and dynamic performance. PHOTOS Acura

Acura revealed the quickest, best-handling and most well-appointed sedan in the brand’s 35-year history – the all-new 2021 Acura TLX.

With a model-exclusive body structure and chassis architecture, all turbo engine lineup, and an athletic stance with bold proportions, the new TLX delivers dramatic gains in both style and dynamic performance.

The first Acura sedan fully designed around the brand’s Precision Crafted Performance ethos, the 2021 TLX will arrive at dealerships early this fall with a manufacturer suggested retail price (MSRP) starting in the low $40,000 range.

In fulfilling its mission as a modern sport sedan, the 2021 TLX integrates a multitude of performance, comfort and connectivity technologies first deployed on the successful third-generation Acura RDX.

With this next generation TLX, our goal was to build the best overall performing Acura sedan, ever!

We made our name in the performance sedan business and this is why we are doubling down to continue the brand resurgence sparked by the Acura RDX.”

The 2021 TLX features an athletic and powerful exterior design with proportions, stance and silhouette heavily influenced by the Acura Precision Concept and faithfully translated from the Type S Concept.

At the front, a bolder and more upright diamond pentagon grille is flanked by signature, next-generation Acura lighting cues previewed in the Type S Concept.

The neatly tailored cabin section is set farther back on the body and features more steeply inward-sloping roof pillars to further emphasize the TLX’s muscular low and wide stance.

The roof itself has been sculpted with a lower-set centre section, defined by two inward curving grooves, for a more distinctive look that conveys a sense of movement and lower appearance.

Aerodynamic elements include a rear decklid spoiler, aggressive front splitter and rear diffuser, and large quad exhaust outlets that harken back to the 2007-2008 TL Type S. Exclusive 20-inch wheels will be offered, wrapped in 255-series performance rubber. More details on the TLX Type S will be released closer to its on-sale date in the spring of 2021.

The 2021 TLX is a sport sedan at its core, built on a new dedicated Acura sedan platform designed for Type S-levels of performance. The new chassis heralds the return of double wishbone front suspension to Acura’s top-selling sedan, offering more precise handling and cornering grip, as well as greater mechanical compliance for improved ride quality.

The TLX’s all-new chassis is anchored to an advanced new body structure — NSX aside, the most rigid ever offered on an Acura vehicle— delivering a 50 percent increase in global torsional stiffness and up to a 100 percent improvement in localized rigidity where the suspension is mounted to the body.

Front-to-rear weight balance is also improved by an extensive use of aluminum, including the front bumper, hood, front fenders and front damper mounts, in addition to locating the 12-volt battery in the trunk.

When it arrives in spring 2021, the TLX Type S will deliver power from an all-new 3.0-litre, 24-valve, DOHC direct-injected and turbocharged engine developed by some of the company’s most experienced powertrain engineers, including members of the team that developed the NSX’s bespoke twin-turbocharged V6 hybrid power unit.

The new transverse-mounted V6 will be highly compact and lightweight, utilizing a dual scroll turbocharger and electronic wastegate to deliver immediate, high-torque response. Compared to the outgoing, naturally aspirated 3.5-litre V6, the new engine delivers dramatic gains in peak horsepower and, more critically, in torque, across the engine’s full operating range, including a more than 50-percent increase in low-end torque.

Final specifications for the new engine, including power output, will be released closer to launch timing. 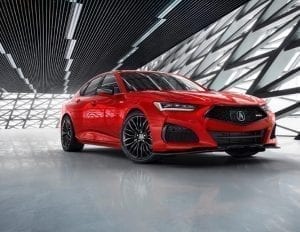 SH-AWD is offered as standard equipment on the 2.0-litre TLX and on the TLX Type S, the first Type S model to feature all-wheel drive.

The Acura SH-AWD system in the new TLX transfers up to 70 percent of engine torque to the rear axle during normal driving conditions, while continuously apportioning up to 100 percent of that rear-axle torque between either the left and right rear wheels.

Additionally, the rear axle is continuously overdriven by 2.9 percent, which amplifies the yaw moment effect of left-to-right torque transfer, elevating performance through sharper and more accurate turn-in, and improved traceability when cornering.

Developed under the theme of “Dual Personal Cockpit,” the sedan’s new, more luxurious interior places a strong emphasis on the driver and front-seat passenger.

The TLX’s high and wide centre tunnel and wrap-around instrument panel create a more personal and strongly delineated space for both front-seat occupants, while its wider body design enables true first-class seating comfort for both, with top-of-class hip and shoulder room (+. 13mm and +18mm , respectively).

Both the driver and front passenger also benefit from the tailored design of Acura’s advanced front sport seats, highly customizable with up to 16-way power adjustability available.

For the driver, a stout leather-wrapped steering wheel, clean and clear instrumentation, and improved forward visibility serve as the foundations for an in-command and exhilarating driving experience.

In addition to unique materials and colours, the TLX Type S interior is distinguished by Type S badging on the door sills, steering wheel and embossed headrests.

This system features a high-mounted 10.2-inch HD display and a console mounted touchpad with “Absolute Position” mapping. For more intuitive control, the TLX’s upgraded interface features physical Power, Volume and Seek controls positioned within easy reach to the immediate right of the touchpad.

Utilizing the latest True Touchpad Interface software, the TLX offers more accurate swipe zones and handwriting recognition, as well as other performance enhancements. In addition, an ergonomically friendly wrist rest provides an anchor point for operation of the touchpad.

The new TLX will feature an expanded colour palette with nine exterior finishes including five premium colours. New to the TLX for 2021 is a distinguished Phantom Violet Pearl. The TLX Type S will be offered in an exclusive, bold Tiger Eye Pearl. Apex Blue Pearl, previously available only on A-Spec models, will be added to the Type S catalog.

The new system provides a unique interior ambient lighting scheme that changes with each driving mode (Comfort, Normal, Sport), as well as 24 selectable interior lighting schemes, each named after an iconic performance driving destination or track, such as “Pacific Coast” and “Suzuka”. 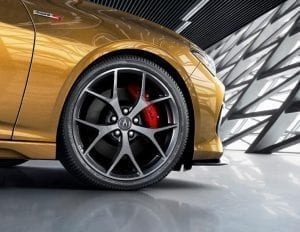 The 2021 TLX provides for a more versatile and personalized driving experience through the use of Acura’s Integrated Dynamics System, now featuring an Individual Mode. As before, the system integrates a multitude of powertrain and chassis systems, accessed via the drive mode dial prominently positioned on the centre console.

An Acura-first, the 2021 TLX will feature an Individual Mode, activated by pushing the Acura logo at the centre of the drive mode dial. The new Individual Mode provides for discrete control of all the same features, enabling the driver to choose their preferred individual settings for each element of system control.

Working in conjunction with Adaptive Cruise Control with Low Speed Follow, Traffic Jam Assist helps reduce driver stress in highly congested traffic situations by helping keep the vehicle in its lane and at a set interval behind a car detected ahead.

The new TLX also delivers advanced levels of passive safety (collision protection) performance through the use of Acura’s proprietary Advanced Compatibility Engineering (ACE) body structure, which has been further refined to provide additional occupant protection in a wider range of collision scenarios.

Additional structural safety features include ultra-high-strength-steel one-piece door rings and an ultra-stiff center tunnel that helps optimize the absorption and direction of collision forces around the cabin.

Design, engineering and development of the 2021 Acura TLX was conducted primarily in America.