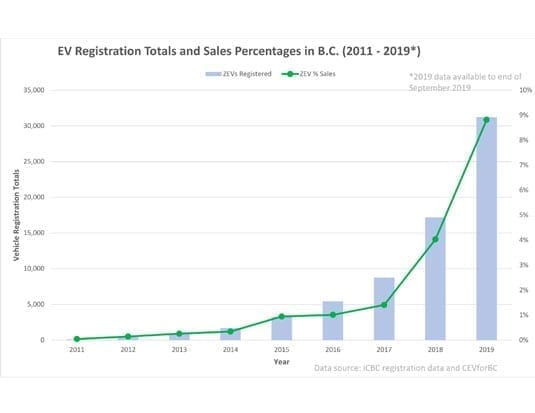 A report published by VEVA confirms that 2019 was a year of records for electric vehicles (EVs) in British Columbia. While EVs have been available to B.C. consumers for a full decade as of 2019, VEVA reports that the number of electric cars in use in B.C. more than doubled in the last 12 months—the highest adoption rate in Canada, and highest on the continent.

VEVA spokesperson John Stonier said, “The success and spread of electric transportation in just 10 years shows the potential for B.C. to be a leader in fighting climate change and promoting air quality while at the same time making our economy more efficient and productive.”

In addition to electric vehicles for consumers, B.C. is also seeing electrification of other transportation systems. Translink, for example, is piloting the first battery electric inter-city route transit buses, and B.C. has seen the world’s first electric seaplane trial, while electric ferries are scheduled to go into operation later this year.

The next step, according to VEVA, is the introduction of larger electric vehicles for a variety of other applications. “Range anxiety is no longer a factor for most consumers,” said Ron Burton, President of the Vancouver Electric Vehicle Association (VEVA). “The requirement now is for auto manufacturers to commence building pickups and larger trucks to fill the needs that cars don’t meet.”