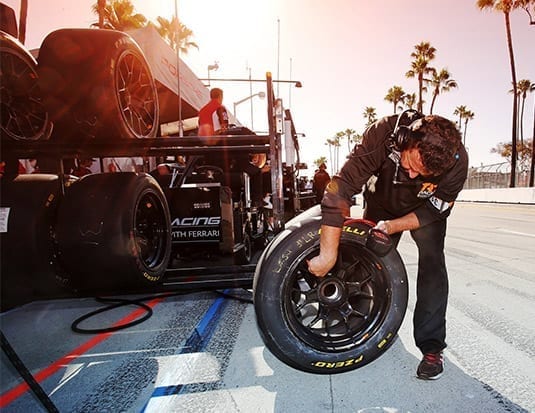 Pirelli has committed to being involved in 10 major motorsport championships in North America this year.

In addition to supplying thousands of tires to several races and rallies every weekend, Pirelli has also committed to 40 personnel to be a part of them.

The company’s involvement with motorsport is an integral part of its research and development program, acting as an open-air testing laboratory. Pirelli’s focus on motorsport enables it to create and improve its Ultra High-Performance line of tires for the road.

Pirelli recently announced that its USA segment has renewed its agreement with Porsche Club of America for the next three years. The company will now support the Werks Reunion Amelia Island in addition to the five national programs: PCA Club Racing, PCA High Performance Driver Education (HPDE), PCA Autocross, Porsche Parade, and PCA Treffen. Besides supplying tires, the company is to also offer trackside support.

Pirelli has signed up to support the Air-Cooled Cup USA, a championship for pre-1966 to 1998 Porsche models, for two years. The championship features seven rounds and will start in April 2019 at Portland International Raceway in Oregon.

The company has renewed several of its long-standing associations, the Trans Am Series being one among them. Pirelli, the headline sponsor for the series since 2017, has currently renewed the partnership for an additional five years, taking it through to 2025. The company is to support the Intercontinental GT Challenge as well, providing its P Zero tires.

The 2019 season will mark the start of a five-year extension, taking the partnership through to 2025. There will be 12 races for the 2019 season, and Pirelli will once again be at the forefront of each event, providing tires and support.

Pirelli’s motorsport activities in North America extend beyond the USA. The company has been supporting the Challenge Xtreme Elite series in Canada for three years and is committed to doing so for another three. This partnership underlines Pirelli’s heritage in off-road motorsport as well as on circuits. The first event is scheduled to be held in Quebec in February. Competitors will face heavy snow and subzero temperatures.

Additionally, Pirelli is supporting the Formula 4 series in Mexico. Running on P Zero tires, the series is designed as an introduction to single-seater racing cars for the champions of the future.