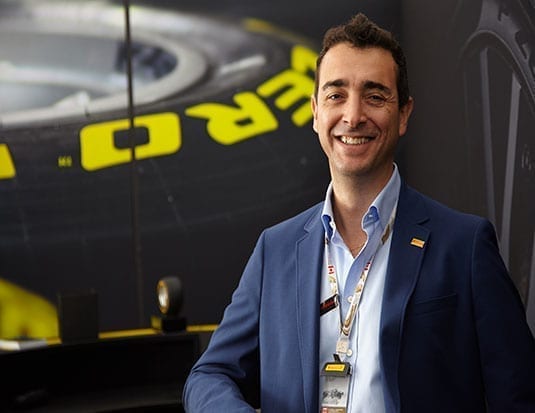 Roberto Prieto is a die-hard Pirelli man. His career with the Italian brand began over 22 years ago in his home country of Argentina, and has seen him take on responsibilities in Venezuela, Mexico, and now Canada.

“My whole career has been with Pirelli,” Prieto says. “I have yellow blood in my veins.”

An industrial engineer by trade, Prieto began his career with Pirelli on the factory floor, improving products and efficiencies. Although currently serving as President of Pirelli Canada, Prieto looks back on his factory days with fondness. “That experience gave me a lot of advantages,” he says. “It allowed me to see things from a completely different perspective, which is a big help to me now.”

His assignment in Canada was almost accidental. Prieto explains that he and his wife enjoy traveling, and that his wife had long wanted to vacation in Canada – but they had never got around to making the trip.

Fast-forward to 2017, and after having served as president here in Canada for almost four years, Prieto has a strong appreciation for the country, the people and the tire market.

“I accepted the position here in Canada for the market,” he explains. “It’s my first time working in a seasonal market, which makes a big difference. It’s a very sophisticated market, and you need to be on your toes every day.”

Prieto says that the combination of the challenges associated with a seasonal market, the strength of the competition, and the diversity of the market overall are the reasons why Pirelli is driven hard to succeed on the North American stage, especially in the UHP segment. “That’s our DNA,” he says, “and we are doing really well in UHP in Canada.”

Despite their success, Pirelli is determined to do even better, and Prieto believes his company is well positioned to do so. “When it comes to the OEM side of the UHP market,” he explains, “we are the leader, especially when it comes to some of the more prestigious vehicles like Ferrari, McLaren, Lamborghini, Maserati, and other luxury brands. Currently, every Lamborghini and McLaren car is equipped with Pirelli tires and approximately one out of every two Ferrari and Maserati cars have Pirelli fitments.”

“Formula 1 is an excellent playground for us,” Prieto says. “All the Formula 1 teams push Pirelli to go to the limit, and we end up translating that information into tires we sell in the consumer market. When you transfer the experience you get in Formula 1 to your consumer tires, there’s no way you can go wrong,” Prieto adds. “That’s why we are in Formula 1.”

And just as Pirelli is determined to stay in F1, Prieto is determined to stay in Canada…at least for now. “After living in four countries, I’m always open to new challenges,” he says. “So far I’m really happy I accepted the challenge to work in Canada. This country has given me a lot of satisfaction, both personally and from a business perspective. And my family likes it too.”