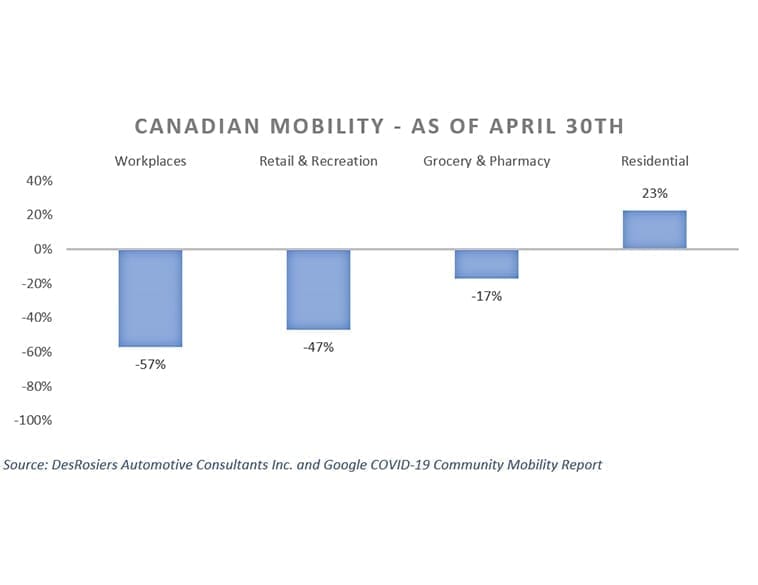 Google mobility data shows that as of April 30, mobility to workplaces was down 57% for Canada. PHOTO DAC and Google COVID-19 Community Mobility Report

DesRosiers Automotive Consultants (DAC), is exploring the impact of COVID-19 on areas of the automotive sector in Canada besides new vehicle sales: these include vehicle finance, used vehicles and the automotive aftermarket.

The aftermarket is a vast and critical area of the automotive industry employing over 190,000 Canadians who are involved in the maintenance and repair of the 28 million light vehicles on the roads in Canada. It is also an area where the company has worked extensively and consistently for more than 30 years creating long-term tracking data in Canada of aftermarket market size and structure.

The aftermarket has many and complex drivers of demand including such variables as:

This variety and complexity of market drivers is what makes the aftermarket so complex to analyze and why most forecasts of the aftermarket from generalist consultants outside the auto industry lack real-world utility—focusing more on a broad discussion of long-term trends rather than useable data and actual market forecasts.

Google mobility data shows that as of April 30, mobility to workplaces was down 57% for Canada.

Workplace data is especially important in Canada due to the dominance of the automobile as the preferred method of commuting in Canada (in excess of 78% of working Canadians).

Other data sources that DAC examined included the 407 ETR highway in Ontario which (though by no means nationally representative) showed a decline of 39.4% in March.

Data on Canadian gas consumption is still lagging but preliminary data for March shows a 17% decline for the month—a figure that will undoubtedly deteriorate in April as the full implications of the various provincial states of emergencies were felt.

U.S. data, while more current, is likely not applicable to the Canadian situation given the different policy approaches in the two countries. There is a wide divergence in new vehicle sales in April (-75% in Canada and approximately -53% in the US). Overall DAC forecasts a 46-52% decline in kilometres driven in Canada in April—with a slow recovery in the subsequent months.

Clearly, we are in the early days of analyzing COVID-19 and its implications for the Canadian aftermarket. Much of this road still remains to be travelled in terms of how fast and successful the reopening of the various provincial economies is. One positive is privately owned vehicles seem to be the transportation of choice in countries that have relaxed restrictions. In addition to these short-term questions, the impact of longer-term potential structural changes remains to be seen.

Much has been made of COVID-19 as a potential gateway to a broader shift toward working from home, and recalibration of the transportation needs of society. Similarly, discussions abound regarding its impact on the future of public transport systems— though given the small role public transport plays in Canada the implications of any change in this variable will be muted here relative to other jurisdictions. Within the aftermarket itself, the past month has seen unprecedented levels of activity for online retailing that may serve to reshape distribution channels in the years ahead.

This summer, DAC will be publishing a detailed market outlook for the aftermarket and its implications for warehouse distributors, parts manufacturers, and major retailers. The report will focus on specific market data and provide a full 5-year forecast at a national and regional level.

While their forecasts will be updated by then, the current baseline model of aftermarket demand indicates that aftermarket demand will fall 11-13% this year. The statistical scenarios in the model vary greatly, however, from a decline of 6-9% in the optimistic scenario to a precipitous decline of 20-25% in a negative scenario under which a severe second wave of the virus stalls provincial economic re-openings.

The company’s model shows significant variations by product line. It also has detailed market sizing and forecasts available by a wide range of products including: