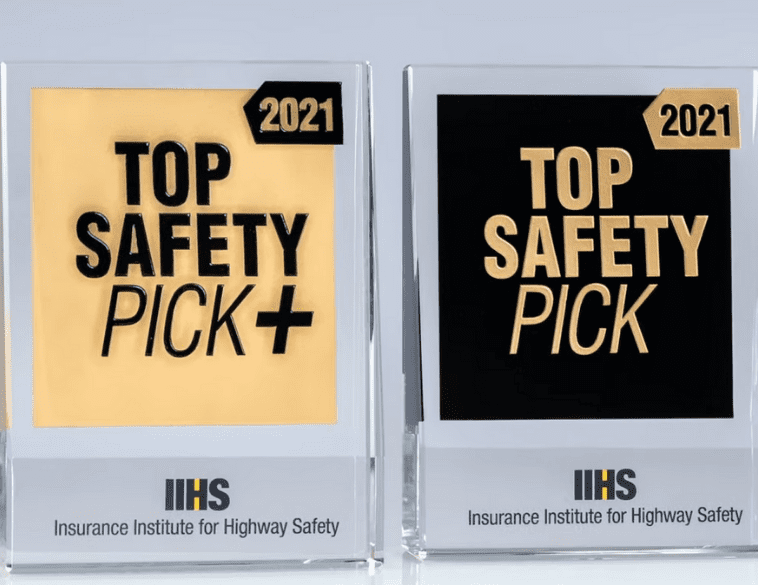 This year, 106 vehicles are included in the IIHS TOP SAFETY PICKS 2021 list; a major increase over the 69 models in 2020. PHOTO IIHS
The annual IIHS TOP SAFETY PICKS awards, published at the end of April, provide useful but surprising insight. Among the approximately 920 2021 models available to the North American market – cars, SUVs, vans, pickups and hybrids – only a handful are still sweeping IIHS awards. Of the 106 winners, Volvo stands out with 15 versions of its 10 models, followed by: Toyota 9, Subaru 9, Hyundai 8, Kia 7, Mazda 7 and Honda 6, all ranked in one or another category. In terms of numbers, the so-called losers in this list of winners are vans – 2 – and pick-up trucks – 1, except that this is the first time that models in these categories have stood out in this competition for the safest vehicles of the last batch.

Upon analysis, it is surprising that the IIHS criteria include not only the effectiveness of the standard and optional automatic obstacle and pedestrian braking systems but also the less than innovative equipment. Although directional headlights and automatic low beam systems may seem like a novelty to new generations and should be promoted as the organization does, the same cannot be said for people who have driven older cars. It would seem that the manufacturers are still unaware that Citroën’s 1967 DS, whose ground clearance could be adjusted at will, already had headlights that followed the steering angle, and that automated high beams have existed for ages.

Many people will be amazed to discover that, among these 2021 champions, some twenty models included in the TOP SAFETY PICKS list are equipped with halogen headlights, whereas in the TOP SAFETY PICKS + category there are only LED headlights. However, it should not be concluded that LED headlights are the safer choice. They are only satisfactory in about sixty cases, mediocre in about twenty, and downright poor in about fifteen. As many of the winning manufacturers have equipped their 2021 models with 3, 4 and even 5 sets of headlights (sometimes ranging from the best to the worst), it is particularly advisable to be familiar with their features before making any vehicle purchase.

Aiming for the top end?

In short, as magical as the letters LED seem, it’s important to take a closer look. Advanced driver-assistance systems don’t need lighting to warn of impending danger or to trigger emergency braking. In any case, it is reassuring in all these respects to rely on the annual IIHS rankings, whose most rigorous test results allow one to make an informed choice, to bet on the top of the range if necessary. Only models that meet the 6 IIHS crash tests are eligible for the TOP SAFETY PICKS awards. In two tables, here is an exclusive summary of what makes each 2021 IIHS award-winning model so special, as well as the associated statistics by category.

Brightness – Up to 4 versions per model

Brightness – Up to 4 versions per model