City of Vancouver: A Climate Emergency 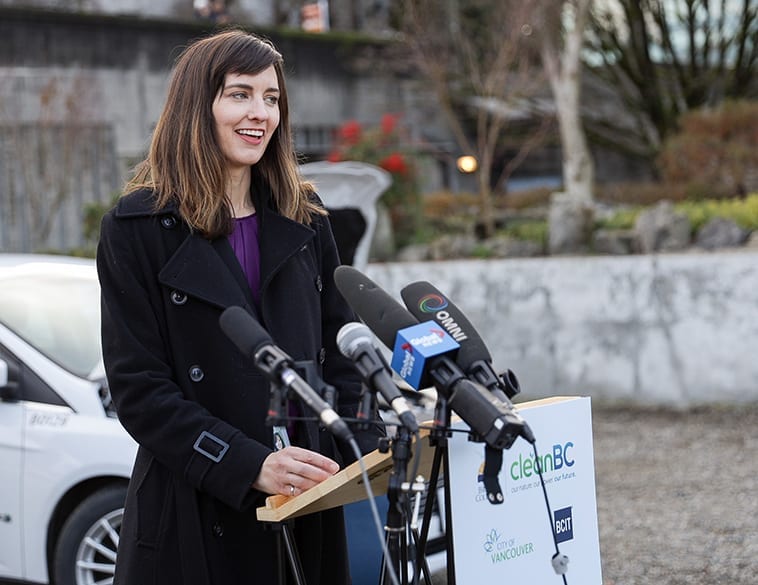 Amy Sidwell spoke at the EV Maintenance Training Program at the British Columbia Institute of Technology. (Photo: Province of BC)

Vancouver is taking dramatic steps to curb the impact its fleet has on the environment.

The City of Vancouver declared a climate emergency in February of 2019, and since then has been working on a plan to further reduce its fleet’s impact on the environment.

“We already had a plan in place to lower emissions by 2020, which we did,” says Amy Sidwell M.Sc. P.Eng., Manager, Fleet and Manufacturing Services, Engineering Services, City of Vancouver. “With the climate emergency, we are now looking at what else we can do to make sure we’re on track for our 2030 and 2050 targets.”

According Sidwell the goal is for the City to achieve carbon neutrality and transition to 100% renewable energy sources before 2050. “With our fleet, we have implemented a green fleet plan,” Sidwell explains, “which includes three pillars. The first is to replace vehicles at the end of their lifecycle with zero emission vehicles. Second, if we can’t get a zero emission vehicle as a replacement, then we look at ways we can use fuel with a higher proportion of renewable content in it. The third is to look at operational efficiencies and at solutions like GPS and telematics to optimize efficiencies when people are actually driving their vehicles.”

Currently, the City’s fleet includes 1,100 cars, 450 trucks, and various other vehicles. “We have 120 electric vehicles on our fleet,” Sidwell adds. “We replace about 200 vehicles a year, and our goal is to replace those with EVs as quickly as possible, while at the same time putting in place the infrastructure we need to support those vehicles.”

The City’s fleet already includes a number of electric ice resurfacers, electric ATVs, and two electric motorcycles. And in addition to the current fleet of electric cars, the City is placing orders for 12 electric trucks, which will be added to the fleet later this year.

Sidwell and her team realize that the City will need to have the infrastructure in place to support the addition of electric vehicles, especially trucks. They’re currently putting in place two Level 2 stations, and 10 DC fast charge stations for the first phase of 12 electric trucks, with more planned for the future.

“We hired a consult to look at our needs and the demand we’ll have throughout the day, as well as what kind of infrastructure we’ll need,” she explains. “You really need to connect with experts in the field to understand what to expect, and you also have to work with your utility company to make sure you’ll have what you need once the vehicles are delivered and ready to go.”

When switching over to an electric vehicle isn’t an option… at least not yet, the City will be using a cleaner fuel source for its heavy-duty vehicles. “We now have a contract for 100% renewable diesel,” Sidwell says. “We transitioned from B5 and B20 blends of biodiesel to 100% renewable diesel that reduces the emissions on our diesel fleet by over 90%.

The City of Vancouver is determined to do its part to cut emissions and reduce the impact its fleet has on the planet. The steps the city is taking pave the way for other Canadian fleets to follow in Vancouver’s footsteps.