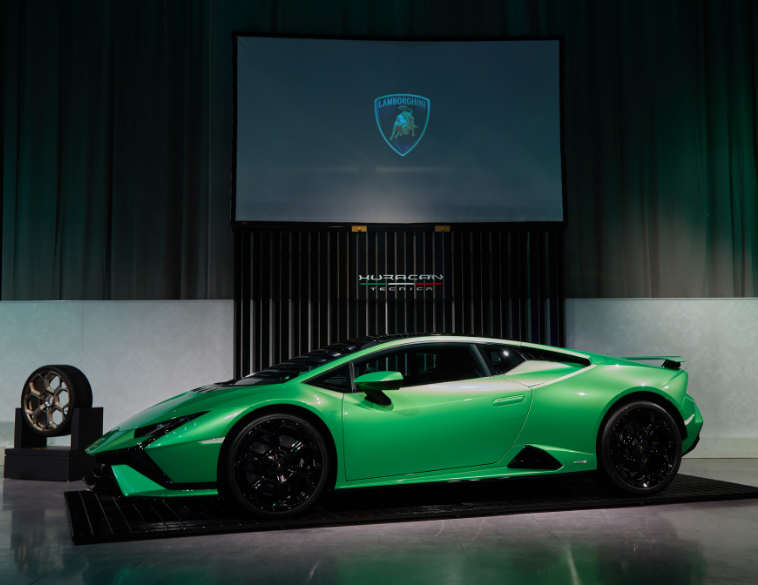 The 5.2L V10 powerplant of the Huracán Tecnica is borrowed from the Huracán STO. Photo Jack Kazmierski

Canadian AutoJournal was invited to preview the all-new Lamborghini Huracán Tecnica on June 9, 2022, prior to the supercar’s Canadian debut in Toronto, Ont. Lamborghini expected close to 400 registered guests to attend a gala event for their first in-person glimpse of the newest addition to the Huracán family.

According to Andrea Baldi, Chief Executive Officer of Automobili Lamborghini, the Huracán Tecnica has been designed and engineered to appeal to a very specific clientele.

“Our customer—the profile that we are targeting here—is somebody who has a very busy week and needs a car that is fast-paced,” Baldi explained. “It must also be a car that he can enjoy during the weekend to play hard. For a racetrack experience, the Huracán Tecnica really is a good fit.”

Designing a supercar for both road and track called for a bit of engineering prowess. “This required certain improvements to the rear-wheel-drive because we needed a system that cools the brakes a bit more,” Baldi said. “We introduced the rear-wheel steering, we kept the rear-wheel-drive because obviously, it’s a racing car. And we wanted to make important aerodynamics improvements to the car to make it faster, more efficient, more stable, and easier to drive when you push it to the edge.”

Although the Huracán Tecnica weighs in with an MSRP of $279,630, Baldi is certain that this is a vehicle owners won’t mind taking to the track on weekends, just for fun.

“That’s what our customers want,” he said. “This is a car that you can use during the week when you work, when you need to move when you want to go to the theatre, and when you want a lifestyle associated with the owners of a super sports car. But then you want to know that if you go to the racetrack, the brakes are not going to fade, you will always have the same confidence, and the depth of the pedal is not going to change at every turn.”

This purebred supercar is certainly able to hold its own on the track. The 5.2L V10 powerplant of the Huracán Tecnica is borrowed from the Huracán STO. It produces 631 hp, 417 lb-ft of torque and delivers a 0-100 km/hr time of 3.2 seconds.

Lamborghini’s 400 guests will have to wait for a year-and-a-half for delivery, if they ordered their Huracán Tecnica at the evening gala on June 9. “We just launched the car in April, we have a lot of orders, and with the volume of interest in the car already, 18 months is the likely wait time,” Baldi explained.

This new Huracán model appeals to a very specific demographic. The typical buyer is male, and mostly between the ages of 35 and 45, according to Baldi. They’re CEOs and entrepreneurs—they work hard, play hard, and want a car that reflects their passions and lifestyle.

“Normally, we’re dealing with customers who have already had experience with super sports cars,” Baldi added. “They can afford the best, so when they want something, it’s not really a matter of how much it costs, but how much this car can deliver, in terms of the overall experience. So I’d say it’s a very savvy customer.”

Production is limited by the speed at which Lamborghini staff can build these supercars. Baldi said their factory can assemble roughly 2,000 Huracán models a year, which means the higher the demand for this new supercar, the longer the wait for Lamborghini enthusiasts.

Canada is a big market for Lamborghini in general, Baldi explained, especially since the introduction of the Urus. “We have developed a dealer network that has gradually become sufficient to deal with the demand in the Canadian market,” he added. “Toronto itself, when you look at super sports car sales, is second only to Beverly Hills and the Los Angeles area, so the demand is amazing.”

Toronto, according to Baldi, is a very mature market when it comes to super sports cars. “For us, the demand clearly exceeds the supply,” he added. “This is a market that is in the top 10 for Lamborghini automobiles worldwide.”

Amongst the 400 registered guests for the Canadian debut of the Huracán Tecnica were Lamborghini fans from the Greater Toronto Areas, as well as Vancouver, Calgary, and Montreal. “The brand has been growing and thriving in Canada in recent years and the demand has never been stronger for our products,” said Baldi. “With the unparalleled performance and comfort of the Huracán Tecnica, we have created the most versatile Huracán to date.”