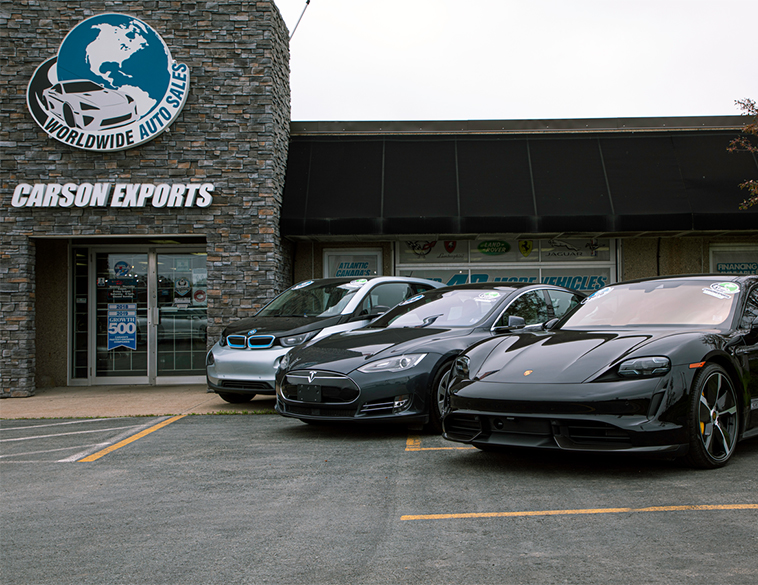 Staff are excited and energized

Carson Exports got their first used EV in August 2020, and Paul Dyer hasn’t looked back since.

“Since then, we’ve dedicated 10 percent of our inventory to electric vehicles, and it’s making up 10 percent of our sales,” says Dyer, the general manager of Carson Exports, a used car dealer in Dartmouth, Nova Scotia.

Initially, he tested the waters with a few EVs, and within three months, put a plan in place to electrify the dealership by adding chargers. Now, the used car dealership is selling seven to eight EVs a month.

There are four chargers installed in the dealership, two outside, and two inside. Working with local engineering start-up Well Engineered, Carson Exports offers EV customers the installation of a Level 2 charger at their home for no charge, as long as there is no rewiring required.

“For the first year, we pay for the charger and the basic installation,” says Dyer. “The customer can leave, knowing they can charge their car in three hours as opposed to overnight. We set them up, and show them how to use charge points.”

That includes the Tesla Supercharger network.

“If they’ve never had an EV before, they can live with it for a week, driving it to work, on the weekend, so they know if it works for them,” says Dyer.

The most popular EV model has been the Tesla.

“People come in all day to look at the Teslas, touch them, sit in them, drive them,” says Dyer. “It’s completely captivated, everyone.” When they see the price, the sticker shock may be a turn-off.

It’s the Chevy Volt, the Bolt and the Volkswagen e-Golf have been best-sellers, along with the Nissan Leaf. When prospective clients come into the store, they’re not always ready for an EV.

“There’s about a 15 percent fringe where people come in, they want a traditional vehicle, see an EV, and start asking about the range,” says Dyer.

The most expensive EV he’s sold was an $80,000 Audi e-tron. “Because it was an Audi, it was a familiar brand, and the customer wanted to go green.”

Those customers who want an EV have done their research and know what they want.

Dyer has taken the time to train staff on the nuances of EVs, knowing the differences between owning an electric and traditional gas vehicle. “From June to October, we had a long road of training and learning,” says Dyer.

“We wanted to make sure that when people leave here with an EV, they’re not going to get hit with a surprise. We wanted to pass on as much knowledge as we can to allow their ownership experience to be very smooth, very comfortable.”

One of the challenges of selling used EVs was addressing range anxiety. “That was the primary reason for the week-long test drive,” says Dyer.

“With an EV, if you use your head a lot, it’s not going to get the same mileage. If someone is an aggressive driver, that’s also going to have an impact.”

Technicians have also been trained and are continuing to be trained on every available platform. Dyer has had to source private trainers and gather information for his techs locally.

“We feel comfortable, we can solve pretty much any problem now,” he says.

It’s been a challenge to decide which inventory makes sense.

The first EV was a BMW i3, which was very affordable at under $20,000. With its limited range, it turned out to be a dud.

“People came in for the i3 and would leave with an e-Golf. It had that German hatchback feel, and double the range of the i3,” says Dyer. “I’ve got the stride of it now, but it was few nervous months.”

He’s now looking to invest 15 to 20 percent of his inventory in electric, based on this year’s sales. “I’ve never seen a swing in the auto industry that’s been this dramatic,” says Dyer.

Together with Well Engineered, the dealership will offer an electric top-up roadside vehicle. “We’ll be able to show up at someone’s car in five minutes and give them between 25 and 25 kilometres,” he says.

And he hasn’t seen salespeople so excited and engaged since the EV sales started. “It’s been an exciting new challenge that has really inspired the staff,” says Dyer.

“Not only am I selling to a whole new set of customers, but the staff has really bought into it. Everyone is doing their extra 110 percent.”