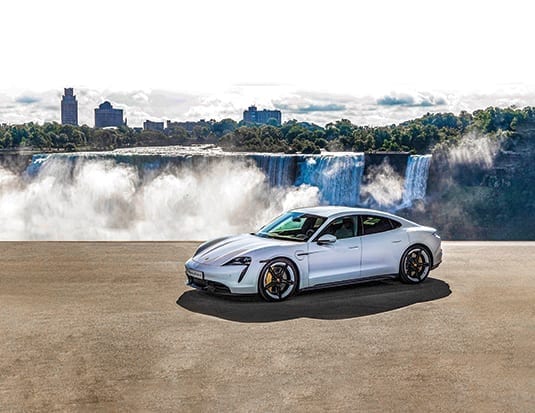 When Porsche took the wraps off its all-new 2020 Taycan, the goal was to showcase its fully-electric powertrain alongside sustainable power generation. It was simultaneously unwrapped in just three locations worldwide: at a solar farm in Germany; alongside wind turbines in China; and in Niagara Falls, Ontario, where the Falls are used to generate hydroelectricity.

The company is banking on battery operation. It built a new factory for Taycan production within the footprint of its operations in Zuffenhausen, Germany, where the 911, Boxster, and Cayman are built. Including full electrics and plug-in hybrids, Porsche plans to offer half of all its global offerings equipped with some type of electrification by 2025.

Colas Henckes, Marketing Director for Porsche Canada, won’t reveal how many Taycans are allocated for sale here, but said that 20,000 cars per year are planned for the factory for worldwide shares. “I can tell you that we’ve seen very high interest in Canada, and we have a four-digit depositor number,” he said.

Two levels are available, both with all-wheel drive. While they obviously don’t have turbochargers, in keeping with its name designations from other models, Porsche calls them the Turbo, which starts at $173,900, and the Turbo S, at $213,900. Both create 460 horsepower, with a temporary boost for launch control, but the Turbo makes 626 lb-ft of torque, while the Turbo S makes 774 lb-ft.

Automakers often restrict their electric vehicles to specific markets, but Henckes said that all of Porsche’s 19 dealers across the country will sell it. Naturally, all will carry the other battery vehicles coming down the pipeline, starting with the next generation of the Macan SUV and its all-electric variant.

This represents a $260,000 investment by each dealer into each facility, which will include regular charging stations, along with fast-charging facilities. The Taycan has an 800-volt architecture for ultra-fast charging, and “under ideal circumstances” can be ready for 100 kilometres of range in five minutes. A depleted battery can be charged from 5% to 80% in 22 minutes. On a full charge, the driving range is around 450 kilometres.

Along with Audi and Volkswagen, Porsche has also partnered with Electrify Canada to create 32 public charging stations. For home charging, Porsche will recommend company-approved electricians, who will do a free power viability check and give quotes for home systems.

While the Taycan seems to have an obvious rival in the electric performance sedan marketplace, Porsche is relatively tight-lipped when discussing Tesla, where the Model S can be priced at some $100,000 less than the Taycan Turbo S. Like Tesla’s products, the Taycan is fully connected, including over-the-air software updates. The Porsche also has a top track speed of 260 km/h, which it can maintain consistently, without issues of system overheating as can sometimes happen with high-performance electrics.

Henckes believes the car stands on its own, bolstered by the company’s history. “By coming on the market with the Taycan, Porsche is considered an engineering company,” he said. “We provide the best technology in connection with sportscars and the brand. Our experience in motorsports is part of the DNA, and the Taycan will have this history of motorsports in its genes.

“Tesla is the newcomer with a new product, and there will be other manufacturers coming (with electric vehicles). We will come positioned as a sportscar. We have already tested technologies on the track, and we have announced that the 996 will be the first vehicle racing with the Porsche brand in Formula E. This connection with the motorsports world is very important, and we want to be the reference for sportscars that are electric vehicles.”

Despite the price difference, Henckes expects some Taycan owners to come over from Tesla, along with other newcomers to Porsche dealerships. “The Taycan will give us an opportunity to get in touch with new target groups that aren’t considering Porsche as a possibility right now,” he said. Among those who have already put a deposit on the car, 40% are existing customers, but 60% are new to the brand.

“We would like to get in touch with younger target groups who have some consideration regarding environmental questions, where Taycan will be the right product for them,” he said, adding that he expects more women to look at the Taycan than they might at the brand’s conventional sportscars.

The Cayenne and Panamera are currently offered as plug-in hybrids, and Henckes sees the Taycan as a complementary approach that will provide new opportunities. “It’s early to say because we only have pre-ordering right now, but we expect to have different targets with electric vehicles (versus plug-in hybrids). The products offer very different assets, and we are convinced we will have different target groups.”

The company is moving to three pillars in its offerings: gasoline, plug-in hybrids, and electric.

“By coming in with the Taycan, we are convincing customers who are asking us to provide them with electricity and with Porsche values,” Henckes said. “This gives us good potential for the future in developing new electric vehicles, and with a sportscar as the reference.”