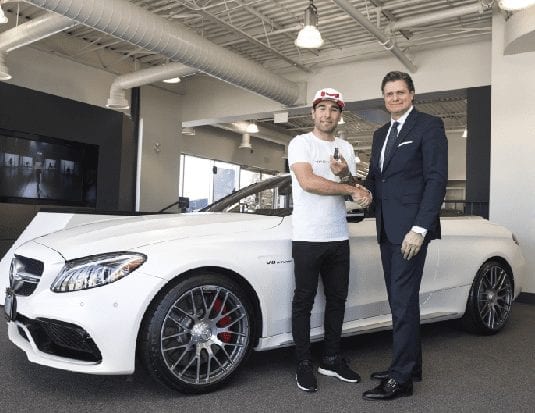 Morad, a regular podium contender and rising star in North American sports car racing, will be AMG brand ambassador for AMG Victoria and AMG Oakville. The 28-year-old Toronto racer will make personal appearances, host track days, and represent the two stores as he crisscrosses the continent on a hectic racing schedule.

The AMG affiliation is seen as an easy fit for the affable Morad. In his second year behind the wheel of the CRP Racing-prepared AMG GT3, Morad is in third place in both the Pirelli World Challenge Sprint and companion SprintX series after the first two events of 2018.

Morad started the season with a pair of third-place finishes in the opening round SprintX events on the street circuit in St. Petersburg, Florida. He followed that up with second- and fifth-place finishes at the Circuit of the Americas round in Texas. Morad shares the AMG with German driver, Fabian Schiller, in the one-hour SprintX events.

“Inviting Daniel to represent us and the AMG brand was a pretty easy decision,” said Dr. Sylvester Chuang, Chairman of the GAIN and AWIN groups of dealerships. “He’s an engaging young man and a terrific representative; and, without a doubt, knows what he’s talking about when it comes to AMG and performance. We’re looking forward to this.”

Morad has risen quickly to the top of the contender list at Pirelli World Challenge events in the 10-event series. A star in karts and single-seaters (he won the Formula BMW-Americas title), he made the switch to sports cars in 2015. His success in the IMSA WeatherTech Sports Car Championship and overall titles in the Porsche GT3 Cup in both Canadaand North America, including a class victory in the GT-Daytona class at the Rolex 24 in Daytona, Florida, has propelled him into the limelight. His next race is at Canadian Tire Mosport Park on May 18-20, 2018.