ADAS: Getting it Right by Nick Dominato

Why it’s important to follow OEM procedures with ADAS and fill the gas tank before a calibration.

On October 29, 2018, 189 people boarded Lion Air Flight 610 for a short, one-hour flight. Less than 13 minutes later, the plane crashed into the sea. The Lion Air disaster was the first accident in a chain of disasters that led to the grounding of the 737 MAX in March 2019.

Investigators in the Lion Air crash discovered that the day before the fatal flight, the plane had been refitted with a replacement angle of attack sensor. The sensor had been improperly calibrated during an earlier repair, and the mechanic who installed it did not perform an installation condition check that would have detected it.

When the plane took off, the misaligned angle of attack sensor fed incorrect data to the plane’s flight control system, which responded by pitching the plane down into the Java Sea, killing all 189 people on board.

Like a plane’s many onboard sensors, ADAS sensors need to be calibrated because improper alignment can lead the sensor to feed incorrect data to the vehicle, causing the vehicle to act in unintended ways.

That’s what happened to Mike Ash, who the CBC reported had his windshield replaced but not calibrated, and who found his vehicle pulling him into oncoming traffic as a result. The vehicle Mr. Ash was driving—a 2016 Acura MDX— notably, had its windshield changed at a time when aftermarket windshields for Hondas and Acuras had notoriously poor camera bracket placement.

That’s the risk you run when you don’t calibrate a sensor.

But there’s more to this story than just performing the calibration. Remember, the angle of attack sensor in the Lion Air crash did go through calibration, but it was miscalibrated.

In order to calibrate a sensor’s alignment, the vehicle must take the sensor’s location for granted. Here’s an example: during calibration, the camera detects a calibration target at a height of 1500mm when the target is actually set at a proper height of 1300mm. Is the camera aligned properly or not? 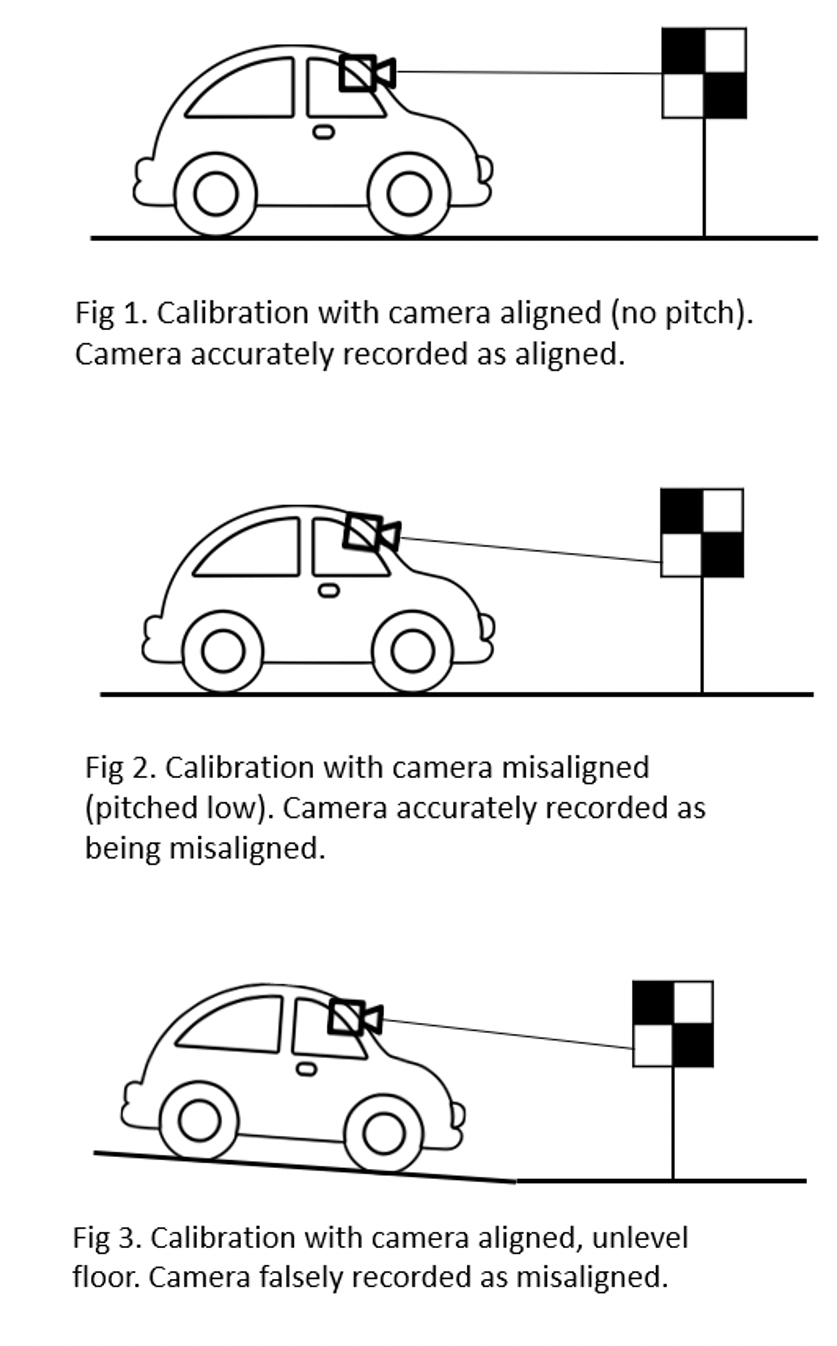 You can’t answer that question without knowing the height of the camera and the pitch of the vehicle.

But if you calibrate that car on unlevel ground, the vehicle can be pitched up or down relative to the target. In that scenario, the camera will see the target as being “high”. But the camera isn’t misaligned–the vehicle is (Fig 3).

That’s why manufacturers have requirements like a level floor, a full tank of gas, and an unloaded vehicle to do a calibration. Those are the steps needed to put the vehicle in its assumed state so that if the camera registers the calibration targets as being high or low, for example, the vehicle will accurately attribute that to the pitch angle of the camera.

But in our unlevel floor calibration, the software will read the camera as being misaligned. You haven’t calibrated the camera at all—you’ve miscalibrated it. And until the camera is recalibrated properly, the car’s software will systematically miscalculate the distance to nearby objects, based on its assumption that it needs to make an adjustment for a camera that’s pitched down, when it really isn’t.

Like the angle of attack sensor in the Lion Air incident, the errors caused by the miscalibrated sensor will ripple through the vehicle’s driving systems that depend on it.

In the world of safety, it’s sometimes said that progress happens one funeral at a time. Our industry has already had our Mike Ash moment.

When it comes to doing proper calibrations, hopefully, our industry won’t need our own Lion Air— or John Eagle moment, in order to do calibrations right.

Nick Dominato is Senior Vice President, Business Development at asTech. You can reach him at [email protected]