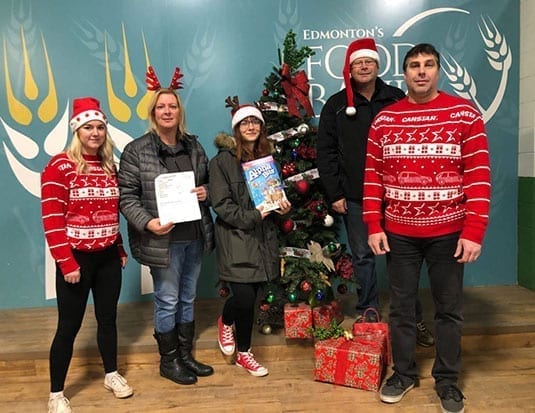 CARSTAR locations from the Edmonton area partnered up with the Edmonton Insurance Association to collectively donate more than 1,696 kg (3,740 lbs) of food and over $700 in cash to the province’s Food Bank during the holiday season.

The network stated in a release that Edmonton Insurance Association (EIA) has been actively raising food and fund donations for the Edmonton Food Bank for 29 years. CARSTAR joined the good cause in 2017. The event has been successful due to the participation of 11 CARSTAR locations and more than 17 businesses from the insurance industry.

“CARSTAR Edmonton South East manager Lisa Murphy invests a tremendous amount of time into coordinating the donation pickups and both Lisa and the EIA make it a fun experience by even hosting a donation bin decorating contest,” said Esther Cantafio, owner, CARSTAR Edmonton North, CARSTAR St. Albert and CARSTAR Edmonton East. “It becomes a fun event supporting Edmonton’s Food Bank and we hope this spreads some extra holiday cheer to the Edmonton community.”

Collecting surplus and donating food to people in need in the Edmonton area is the primary mission of the Edmonton Food Bank. The organization extends help to more than 20,000 people per month, of which 40 percent are children. The Food Bank also tries to look for solutions to the causes of hunger.

CARSTAR notes that its locations in the Edmonton area believe in giving back to the community they live and work in. The facilities are committed to fundraising for Cystic Fibrosis Canada, CARSTAR’s charity of choice, donating several thousands of dollars to the cause. Additionally, they have provided local veterans a free windshield treatment to make winter driving easier as part of Remembrance Day celebrations and have also supported local fundraisers.