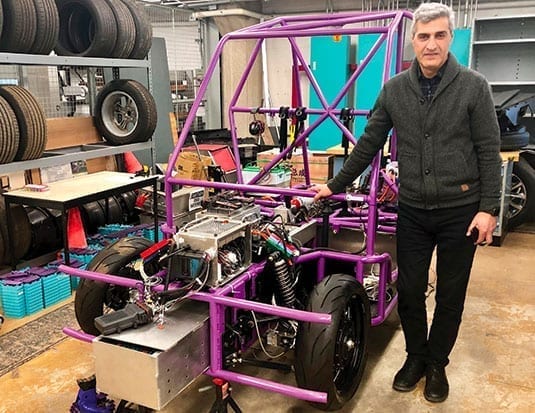 Wheel units designed by engineers at the University of Waterloo aim to solve the economies of scale problem in smaller vehicles.

Engineering researchers at the University of Waterloo, led by Professor Amir Khajepour from the Department of Mechanical and Mechatronics Engineering, have developed an innovative, self-contained wheel unit. It combines a wheel and an electric motor, along with braking, suspension, steering and a control system within a single module. Ready to be bolted to any vehicle frame, the unit is complete in itself; all it needs is a body.

Researchers believe that the wheel units will additionally help in creating space for passengers that would otherwise be devoted to mechanical components such as steering columns.

The birth of an idea

According to Professor Khajepour, the idea to design the wheel units germinated a few years ago when evaluating why smaller cars cost more than larger ones. If a consumer wishes to purchase a smart car, he explained, he or she would be ready to invest a reasonable amount, such as $15,000. However, if the same vehicle is being offered at $30,000, it is natural to opt for a larger model for the same amount or a little extra.

“It comes down to economy of scale mostly. On average, only 10,000 units of small cars are sold in a year. On the other hand, it is normal for approximately 100,000 units of each large vehicle model to be sold within the same time frame. Therefore, the cost of a small vehicle is not proportional to the size and mass of the material used,” explains Professor Khajepour.

The wheel units designed by the Waterloo team target this issue. Since the basic units will remain the same regardless of the look of the vehicle, manufacturers interested in developing new models and new functionalities can do so without spending millions in designing everything from scratch.

Now that the wheel units have been designed and are ready to roll, the next step—according to the research team—is to bring in a start-up company or an interested stakeholder to take the units into the real world.

Professor Khajepour suggests two follow-up steps for his project. The first is to scale the system up, technically known as a corner module, for vehicles that require more torque. This can help lay down the path for cost-effective production of low-volume, specialized vehicles with customized bodies for commercial usage such as mining, forestry, and rescue operations. The second step is, of course, looking for any interest from the automotive industry to take the units to the next level.

Are the wheel units practical?

The wheel units are not intended to replace the conventional method of manufacturing vehicles, says Professor Khajepour. “If it is possible to sell 50,000 to 100,000 units of a single vehicle, why would manufacturers need to use this special unit?” he asks. Manufacturers can easily optimize such a vehicle at cheaper costs.

The units are only applicable for a smaller number of specialized vehicles. Some possible applications for the units would be vehicles that navigate mining shafts, autonomous vehicles in resorts for delivering goods, and caddie cars at golf courses.

The wheel unit is a financially viable solution in such cases. “If manufacturers are able to get multiple small orders that amount to a bigger total count, the overall cost will drop. For users it makes sense as they don’t have to invest in designing these things themselves for such low numbers,” Khajepour adds.