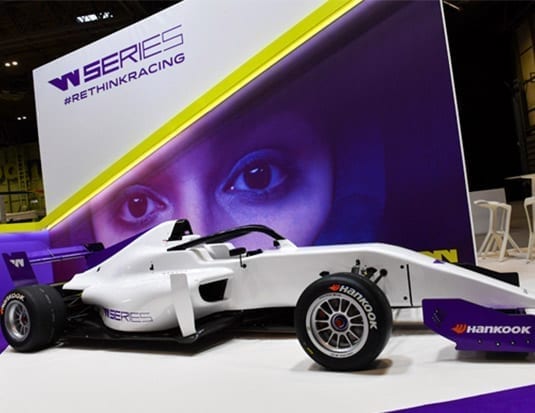 Hankook Tire is now the official tire partner of the new W Series that specifically aims at encouraging women in motorsports.

Hankook Tire will provide its high-end racing tires, the Ventus Race (F200 slick and Z217 wet), in sizes VA 230/560-13 and HA 280/580-13 to the W Series. The organizers of the new single-seater W Series and Hankook Tire have joined forces to campaign for female racing drivers who despite venturing into the world of motorsport, are still a minority compared to their male counterparts.

The W Series will partner with DTM to host the series on six race weekends in 2019. Hankook Tire has been an exclusive tire partner of DTM since 2011. The inaugural round of the all-woman Formula series will be held at Hockenheim in the first week of May 2019. Brand Hatch is to host the finale in August. The overall prize money budget is fixed at 1.5 million dollars. The winner is to get a cheque of 500,000 dollars.

More than 100 female drivers from 30 countries had applied for seats in the 270-PS Tatuus T-318 Formula 3 cars. Of them, 60 women advanced to the qualifying round.  A jury of experts, including former Formula 1 driver David Coulthard, selected the final 18 drivers who will be occupying the coveted starting positions.

The selected group of drivers are to undergo extensive training courses, tough fitness tests and ample driver training, to ensure that they are fully prepared for the beginning of the W Series in Hockenheim. Since minor changes to tire pressure could have a big impact out on the track, tire management is believed to be particularly important for the race. Hankook therefore asserts that its Ventus Race tire, with its extreme consistency and high grip level, is the suitable partner for the young drivers.

“We are very enthusiastic about this new partnership with W Series and are looking forward to supporting this fascinating new race format to the best of our ability with the Ventus Race [tire] and our know-how,” says Manfred Sandbichler, Hankook Tire Motorsport Director, Europe. “One major reason for our involvement is the fact that W Series is exclusively for women. This is great, as it allows female drivers to develop in a professional environment within the motorsport scene, which is still male-dominated. However, we are not just thinking about the women in the cockpit, but also want to ensure that female mechanics, engineers and team managers get more opportunities in motorsport too.”

“Hankook Tire is an exciting and innovative company, which, like the W Series, is always prepared to strike out in a new direction. For this reason, we are happy to have a partner like this on our side. We received a lot of interesting offers, but Hankook Tire had by far the best overall package and will be fully committed to helping us offer women better opportunities in motorsport,” explains Catherine Bond Muir, Chief Executive Officer, W Series.