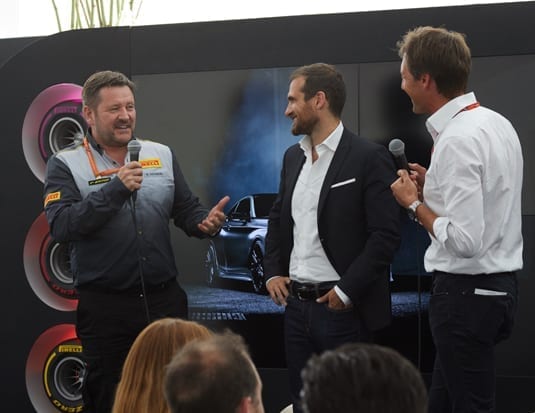 The Italian firm will equip the Black S with P Zero tires.

Infiniti and Pirelli have announced that they will collaborate on Infiniti’s ‘Project Black S.’ The new partnership was announced at the Canadian Grand Prix in Montreal over the weekend.

“We were fascinated with Project Black S since Infiniti unveiled it at the Geneva motor show earlier this year—we simply had to get involved,” said Paul Hembery, Motorsport Director, Pirelli. “Project Black S is the ultimate expression of innovation and cutting-edge technology transfer, which is in our DNA, so we couldn’t let this opportunity go by. We are thrilled to be a part of it and to support Infiniti on this project.”

Pirelli will design and make bespoke tires developed exclusively for Project Black S. The “Project” showcases how a performance hybrid powertrain–developed in collaboration with the Renault Sport Formula One Team–could enhance the performance and dynamics of an Infiniti Q60.

“We are very excited about our Project Black S and the work we are doing with Renault Sport Formula One Team on performance hybrid technology,” said Tommaso Volpe, Director, Infiniti Global Motorsport.