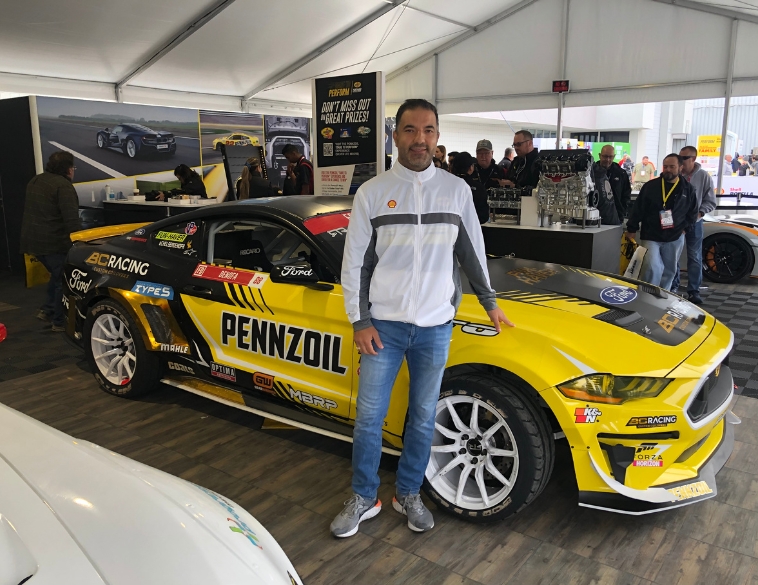 During our visit to the 2022 SEMA Show, Autosphere stopped by the Shell/Pennzoil pavilion on the Silver Lot in front of Central Hall of the Las Vegas Convention Center.

Kheireddin explained that Shell’s decades of experience in motorsports have allowed the company to formulate oils that can withstand the most extreme performance conditions. Shell is the official lubricant partner for the NTT Indycar Series, where relatively small 2.2-liter dual overhead cam twin-turbocharged V6 engines crank out up to 750 hp and have to endure up to 500 miles of high-speed, high revving use. In that kind of environment, the technology used to develop lubricants to protect these engines can also be applied to street vehicles. This becomes particularly relevant given the pressure on OEMs to continually push for tighter fuel economy and emissions targets from internal combustion engines. And with products like Pennzoil Ultra Platinum, service centers can have supreme confidence that the oil they sell and pour into their customers’ vehicles, is able to withstand the toughest operating conditions.

As if to illustrate the point, we also got a chance to ask Vaughn Gittin Jr. [who goes by JR], his own thoughts on using Pennzoil products in his race vehicles. “Lubrication is absolutely critical in a sport such as drifting,” JR explained, “and we’ve got the engine failures to prove it.” And it was this scenario that led to the relationship with Shell/Pennzoil. Team RTR uses NASCAR spec Ford Racing FR9 cylinder heads combined with a custom block for its Mustang drift cars, and these engines are consistently being revved to 9,000 rpm and combined with a 350 to 400 hp shot of Nitrous Oxide. Under those extreme conditions, and also for RTR’s off-road race ventures, the results have been phenomenal. “We’re just not having the failures we used to,” JR explained “and our rebuilds are pretty much just routine. And we’re using an off-the-shelf product—it’s the same product you can go to your local Jiffy Lube or auto parts store.”