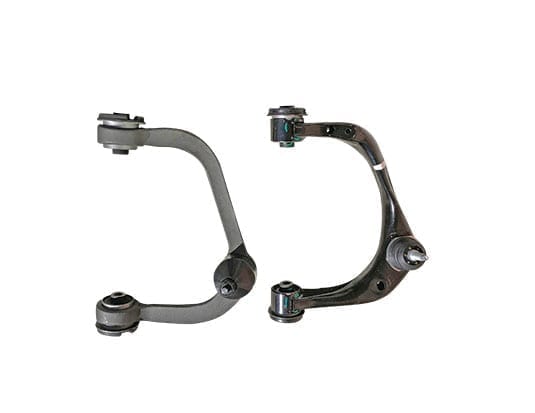 Part 2: More opportunities for the aftermarket?

In the previous issue we looked at the impact of current Corporate Average Fuel Economy (CAFE) standards on vehicle OEMs and the need to save weight in order to meet strict mileage targets.

For many vehicle manufacturers an obvious area to shave weight concerns suspension components. Gord Paton, Engineering and R&D Manager, Mevotech, notes that as a result, when it comes to aftermarket service providers and technicians examining and replacing suspension components, traditional practices are often no longer effective.

No longer an option

“For many years, control arms were heavy duty components, so a technician could pop out the ball joint and install another one. Today, because OEMs have largely switched to stamp steel instead of forgings for control arms, you’re not going to be able to perform multiple ball joint replacements because the stamped steel parts are not durable enough.”

As a result, he says, entire control arm replacement is becoming the norm, and there are reasons why it simply makes more sense and why it’s something that jobbers need to consider when supplying their repair shop customers. “For the motorist, replacing the entire control arm will save on labour. Plus, you know that you have brand new bushings and a brand new ball joint along with the new part. If a shop technician is doing an inspection on the vehicle and sees the bushings are worn, chances are the ball joint is in equally bad shape.”

He notes that while the upfront cost of the part may be more, it makes far more sense over the longer term than trying to just replace a ball joint. Also, with less labour, the overall cost of the R/O (including the part) might actually work out cheaper (particularly considering that ball joint replacement is one of the more labour intensive repairs on a vehicle).

Paton also cautions on what he sees as parts that are labelled OE-equivalent, since the parameters have changed. “The OEM will have the parts designed to maintain performance for the duration of the warranty period,” he says. “If your customer is looking to keep the vehicle long term, you should present them with different options.” He notes that Mevotech provides a range of different options, including heavier-duty components in the Mevotech Supreme line that are engineered above and beyond OE requirements.

“If a shop has repeat customers, they trust the staff and technicians to identify the best solution for them,” says Paton, “but because OEMs are having to meet these stringent fuel economy targets through weight reduction, an OE replacement or equivalent might not necessarily be the best solution.

Ingram says he notices the difference between OE parts and some aftermarket units, particularly on newer generation vehicles such as full-size, body-on-frame pickups and SUVs. “What we see is that some of the aftermarket parts are larger, heavier units compared with the OE offering.”

While he hasn’t seen a large number of bent or distorted control arms, he does note that potentially, it could be a serious problem. “This past winter, we had a lot of ice build-up. In some areas we’ve seen four and five-inch potholes in the road. When you combine conditions like that with lighter suspension parts and the trend of people keeping their vehicles longer, we will be running into situations where customers will be changing suspension components two or three times.”

Like Paton, Ingram stresses the importance of offering the right part for the right situation. “If you’re going to keep the vehicle longer, you need to go with the stronger, beefier part. The last thing you want is to do your customers an injustice by offering them an economy part with lower integrity.”