2018 AIA ACE Conference: The Good, The Bad and The Future 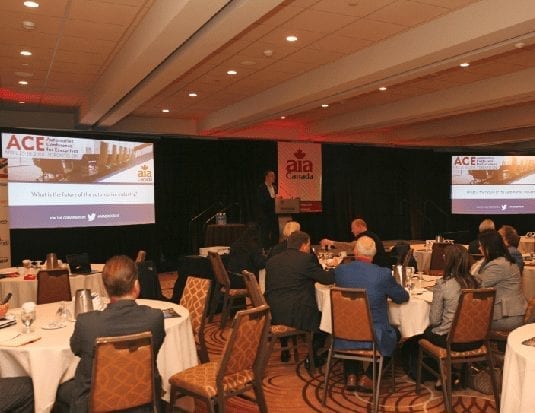 What to expect and how to prepare for it were key highlights of this very insightful, engaging event for aftermarket executives.

On April 25-26 AIA Canada hosted its Annual General Meeting, followed by its Aftermarket Conference for Executives (ACE) at the Sheraton Centre Toronto. The aim of ACE, was to take a look at some of the trends emerging in the automotive industry and how aftermarket businesses can position themselves to be ahead of the curve.

And as the event’s guest speakers revealed, some of those trends will see dramatic changes in the way we buy, sell, service and operate vehicles.

Kicking things off was futurist Nikolas Badminton. In The Future of the Automotive Industry, Badminton talked about the “third industrial revolution,” and how this brave new world will be driven by data managed by cloud based systems. He highlighted some of the key milestones in automotive technology over the last century and that moving forward, the emphasis is on renewable energy, not fossil fuels. “As of next year, the World Bank will no longer fund any fossil fuel based projects,” said Badminton.

He pointed to a number of renewable energy projects underway including the Upper Nicola/Fortis BC solar project to build a 15-megawatt solar farm in Merritt, B.C.

With a shift towards renewable energy, Badminton said that electric vehicles are going to become increasingly prominent and that the development of lithium glass batteries will provide a huge leap forward in terms of EV capability and range, with costs continuing to decline.

And because EVs don’t require a lot of the maintenance that vehicles need today, Badminton said that as far as the aftermarket is concerned, the revenue pool per vehicle could drop by 60 percent or $400 per vehicle per year.

Yet on the flip-side, Badminton said that with the influx of EVs and connected cars, the opportunities for areas such as cyber security, EV powertrain conversions and others such as customizable engine sounds could present a very significant business in the years ahead, especially for savvy operators that are able to adapt to a changing marketplace.

Diane Francis, award-winning investigative journalist, author and screenplay writer, delved into the ongoing the U.S./Canada relationship and provided insights into how things currently play out economically and politically between the two nations and what we might expect to see in the coming years.

She noted that in order for things to move ahead, greater economic integration between Canada and the U.S. is a must and within that, greater labour mobility is a key part.

She noted that the perceived “tech revolution” could have a huge impact on the job marketing, impacting as much as 47 percent of workers with transportation being hugely affected. “One in eight people in Canada and the U.S. drive a vehicle for a living,” she said “and this will become a big social issue.”

She noted that government mandates to ban the sale of fossil fuel vehicles in countries such as Germany and Norway will accelerate the development of alternative forms of propulsion and energy sources and that combined with an environment where business life expectancy is decreasing and a population that is aging, there are numerous challenges ahead.

Francis said that in order for Canada and the U.S. to meet these challenges, greater bi-national collaboration will be required, which is why she said, we’re likely to see the development of a two- country perimeter with harmonized legal, taxation and immigration systems.

Following a networking lunch, a special TEDx Talks session, witnessed attendees talk about their own views on the “Good, the Bad and the Future.”  Paul Prochilo, CEO of Simplicity Car Care, discussed changes happening in the aftermarket industry and the need to source and cultivate talent and foster a culture of mentorship to help both individual businesses and the industry as a whole continue to grow and thrive in the 21st century.

Dave Fifield, President, Wakefield Canada, discussed innovation and how the company was able to help its customers track the amount of lubricants they had and needed via the introduction of a system called Wakefield Think Tank Inventory management—using a device that accurately measures the level of oil in each tank. The system is now being deployed across Wakefield Canada’s entire network. “Building our future starts with the customer,” said Fifield.

Ray Proulx, Senior Business Manager, KYB Americas, identified two key challenges ahead in the industry, the changing aftermarket distribution landscape and how KYB can continue to support its jobbers and their customers, as well as technology advancements in how distributor and jobber counter staff understand exactly what they are selling and providing to their customers. “Features on the car are changing daily,” he said “and right now, our biggest competitors are the dealers who own the data.”

Final speaker of the day was tech industry entrepreneur Michael Hyatt. In Leading with Grit, Passion and People, Hyatt captivated the audience leaving them with some rather thought- provoking subjects to ponder. Hyatt discussed that the importance of success comes down to consistency and incremental steps and that how many people, including political leaders achieved it by following through and showing up. “Everybody comes from a town called Unlikely,” he said. “The first rule of success is showing up. I would rather hire C grade students that work for it than A grade students that don’t.”

He talked about the concept of marginal gains and how by focusing on making everything one percent better and delaying gratification we’re able to increase our chances of success.

He also talked about the need to adapt business models, especially as the pace of change continues to accelerate and how the importance of retraining skills is just as important as it ever was. “We will witness hundreds of thousands of job-losses,” he said; “just as we always have.”