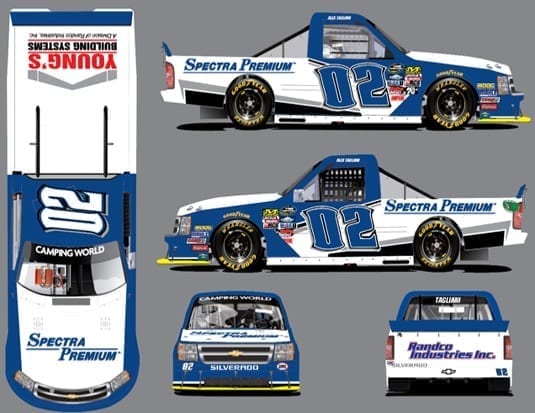 Building upon these successes and with a view to deepen its involvement in NASCAR, Spectra Premium will also be taking part in the upcoming NASCAR Camping World Truck Series race at the Canadian Tire Motorsport Park in Bowmanville, Ontario, the only race from this series to run on Canadian soil.

Representing Spectra Premium in the Chevrolet Silverado 250 race on September 3, 2017 in the #02 Spectra Premium Chevrolet truck will be renowned Canadian race-car driver Alex Tagliani, teaming up with Young’s Motorsports. In his two previous appearances in this series, Tagliani secured two pole positions and posted a top-5 finish in 2015.

As part of its commitment to develop high performance components for auto racing, Spectra Premium has developed a racing Radiator, the NSCR100, engineered and manufactured in Canada and currently used by NASCAR Pinty’s Series drivers Jean-François and LP Dumoulin. The high-performance Radiator was tested earlier this year and has performed admirably throughout the season with two podium finishes and two drivers in the top ten of the championship rankings.

“This year has seen many major developments with Spectra Premium’s involvement in motorsports like the introduction of the NSCR100 high performance Radiator to the NASCAR Pinty’s Series and our ongoing partnership with Dumoulin Competition,” said Jason Best, Senior Vice-President, Aftermarket, Spectra Premium.

Alex Tagliani added that,“running in the Camping World Truck Series on the Mosport track is absolutely fantastic. It’s also a pleasure to work once more with my old chief mechanic Chad Kendrick.”

“Representing Spectra Premium on Canadian soil in an American category is even more exciting. Things happened very fast, and I am honoured to sport the company’s livery. I hope we’ll have a good weekend!”