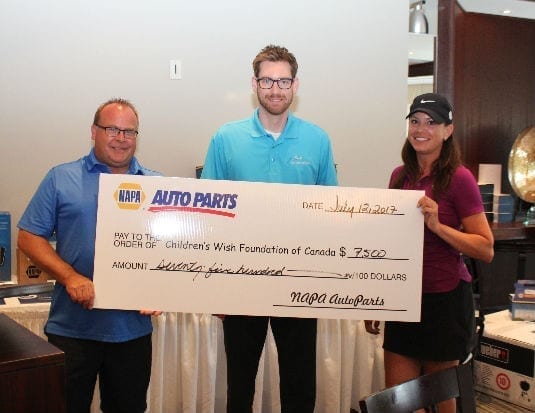 Over 180 golfers enjoyed a wonderful warm sunny day on the golf course until Mother Nature moved in, bringing heavy thunderstorms which ended the tournament after nine holes of golf.

The tournament itself raise $7,500 for The  Children’s Wish Foundation of Canada.  In a shining example of the generosity that members of the aftermarket often demonstrate, Brian Baier, a member of NAPA’s dedicated sales force, matched the funds raised by the tournament. $7,500 to the Children’s Wish Foundation in memory of his parents, Norm and Marion Baier, bringing the total amount raised to $15,000.

Once again the event was put together by Christine Herr, NAPA Ontario Marketing & Events Coordinator and her team. Serving as Master of Ceremonies for the event was Kevin Patterson, General Sales Manager, NAPA Auto Parts.