25th Annual Slapshots for a Cause Raises $10,000 for Cancer Research

23 May 2017
Steve Pawlett
Autosphere » Mechanical » 25th Annual Slapshots for a Cause Raises $10,000 for Cancer Research 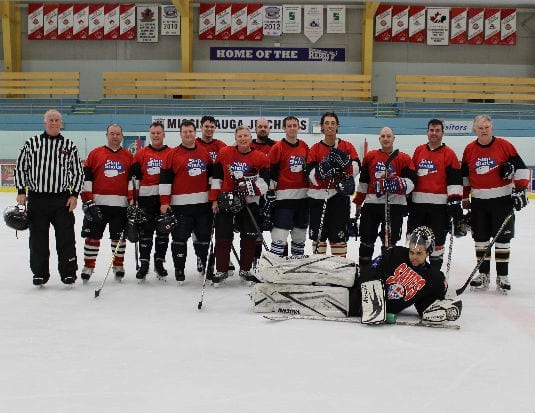 On May 18, members of Canada’s automotive aftermarket took to Iceland Arena in Mississauga, for the annual Slapshots for a Cause hockey tournament.

Now in its 25th year, this annual event is made up of four teams of aftermarket professionals who battle it out on the ice, all in the name of charity. In addition to putting their hockey skills to the test, the teams raise funds for the Canadian Cancer Society.

The final game was between Team One with Tim Ware of Acton Automotive in goal against Team Three with rental goalie, Ryan, in net. The turning factor proved to be Cory Racioppo on Team three, who was a last-minute replacement for his father Tony. With most of the players running low on gas, young Cory lit up the ice and scored the winning goal.

The tournament was originally started back in 1993 by Brad Shaddick, General Manager, Canada for Federal-Mogul Motorparts. At that time, Shaddick figured there were enough guys in the aftermarket who enjoyed playing hockey that he could put together a couple of teams to play some hockey and have some cold beer and wings and make it into a social event. The first game was held at Conestoga College in Kitchener on an Olympic-sized ice pad.

“There is no way we’d be playing on an Olympic-sized ice pad today,” joked Shaddick.

After the first year, some of the guys wanted to keep it going, and it was suggested they turn it into a charity event. “We chose the cancer society because cancer effects more people and families than any other affliction,” explained Shaddick. “We took a vote, and that was the choice we made.”

The second year of the tournament raised about $500. Then it grew to four teams, so they had to find a facility with two ice pads to accommodate having two games going simultaneously. Two 50 minute games are played then the winners play winners and losers play losers.

That continued, and the group started a sweater sponsor program which helped to generate additional revenue. “We were able to generate anywhere from $8,000 to $12,000 per year,” added Shaddick.

“We always wanted to keep it at this level because if it grows beyond four teams, it will become a major event and costs would go up, and the logistics would get more complicated,” explained Shaddick.”It’s really like when my dad started Shads back in 1973. It’s a fun event, and it involves everyone from the aftermarket, manufacturers, WDs, Installers, and jobbers who want to come out and play hockey.”

A few years into the annual tournament a gentleman by the name of Lube Koval approached Shaddick and offered to sponsor the ice pads. With this sponsorship, Slapshots for a Cause was able to contribute additional funds to the Canadian Cancer Society.

“This was a very generous offer, and Lube continued to sponsor the ice pads for several years, and then, very tragically, Lube became sick and passed away and very graciously, his widow continued to sponsor us. We have a trophy for the winning team, and when Lube passed away, we name it the Lube Koval Memorial Trophy,” explained Shaddick.

Five of the original players who still come out to the event are Kent Rennie, Dean Clarke, Brad Shaddick, Jim Young and Bill Hay.

“We have more youth coming out, so we now have a new generation of industry players who will keep the tradition going. This year’s Slapshots for a Cause raised $10,000 bringing the total funds raised since its inception back in 1993, to $195,000.